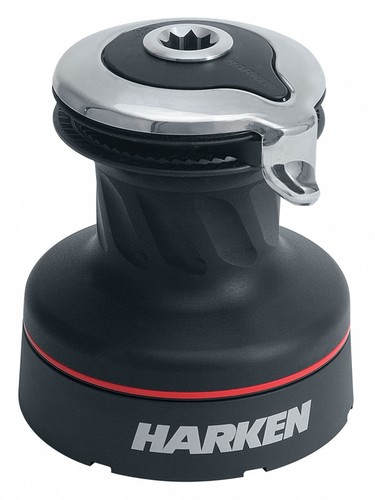 While discussing the care and feeding of Lunacy‘s winch menagerie last week I neglected to mention that both Harken and Holmatro have recently introduced new winches that are markedly different from what has come before. Both companies have attempted to “reinvent” the modern sailing winch. Though their products seem quite similar, there are in fact some subtle but important distinctions between them.

For example, the signature feature of Harken’s new Radial winches are the large diagonal grooves on the winch drum (see photo above). These are designed to work as screw threads that force the turns of line on the winch down the drum as the line is eased. This is to combat the tendency of the line to ride up the drum as it is eased, thus leading to uneven line friction across the face of the drum and sometimes to nasty overrides. Holmatro’s new winch, you will note, likewise has diagonal grooves cut into its drum (see below). But the angle is much less aggressive and leans in the opposite direction. Also, Holmatro’s grooves do not run the entire vertical length of the drum, but peter out about two-thirds of the way down the drum’s working surface. 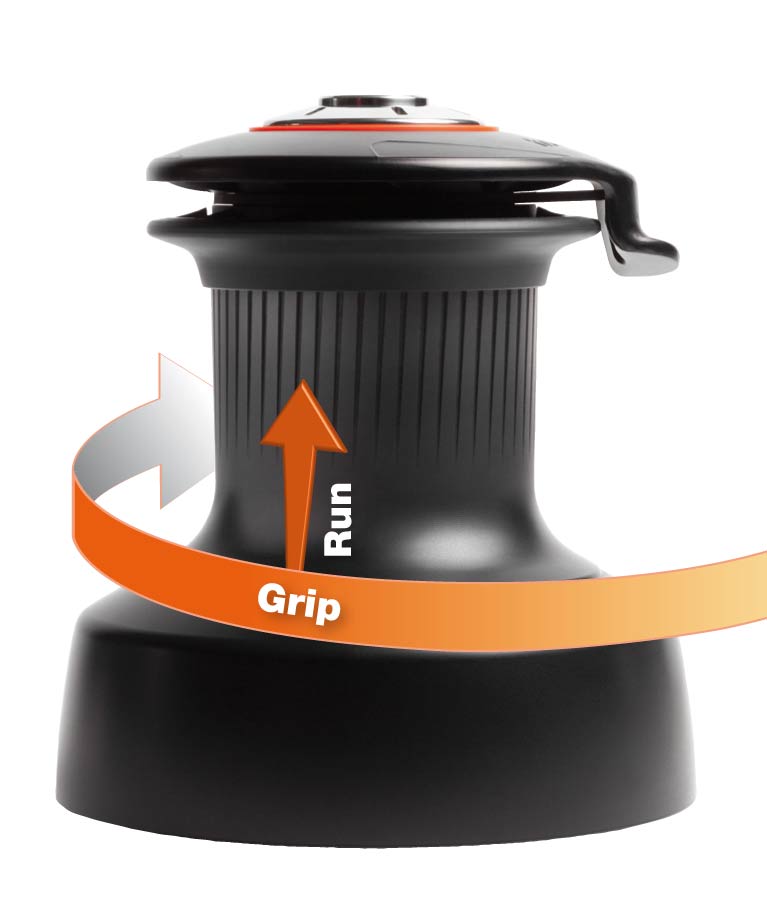 As Howard Seaver of Holmatro USA explained to me this morning, the slight angling of Holmatro’s grooves is intended only to keep them perpendicular to the line as it wraps around the winch drum. The grooves also get progressively deeper as they move up the drum and are intended to make the top of the drum grippier than the bottom, so as to improve the winch’s efficiency both as line winds on to the winch and is eased. The winch drum is also slightly larger at the top than at the bottom, again to help drive line wraps down the drum as line is eased.

Both winches also have plastic bearings inside to help reduce weight and maintenance. Harken’s Radials have conventional-looking multi-piece roller bearings trapped in cages, as you can see here… 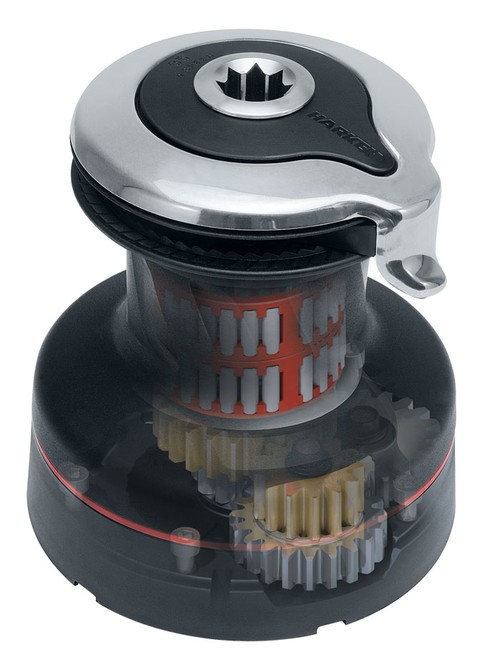 …but, as Harken’s Bill Goggins recently explained to me, the cages lock on to the winch’s main spindle, so there is no risk of the bearing cages coming loose as the drum is removed.

Another unique feature of the Harken Radial winch is that you need not remove its drum to install it. Instead you can remove the skirt below the drum, slot the mounting bolts into sockets that capture the heads of the bolts when the skirt is replaced, then mount the entire winch in a piece–assuming, of course, holes for the bolts have been pre-drilled in appropriate locations. This also assumes you are through-bolting the winch to the deck and that nuts will be used as fasteners underneath. In cases where the bolts must instead be screwed into tapped holes in metal plates buried within the deck laminate, it is still necessary to remove the drum to install the winch.

Both the Harken and Holmatro winches have fixed tops to reduce the chances of fingers or lines getting caught between the self-tailing stripper arm and the moving drum. Both winches can be entirely disassembled for servicing without the main body of the winch having to be removed from the boat, which is a key feature I suggest you look for in any winch you buy. Both companies are also claiming overall weight savings of up to 50 percent.

I can’t offer any opinions as to which winch works better, as I’ve not yet had a chance to use either of them. I hope to inspect both animals in more detail at the Miami show next month and will report back if I learn anything interesting. Meanwhile, you can watch the competing promotional videos: Harken here and Holmatro here.

If you have 10 minutes to spare, you can also watch this rather boring video wherein a Radial winch is disassembled by an 8-year-old child. Howard Seaver swears to me you can tear down one of the new Holmatro winches in 60 seconds without any tools. Which would seem to give Holmatro a big edge, at least in this department, but I am sure you can in fact strip a Radial winch in much less than 10 minutes. The problem with the kid is he talks too much.