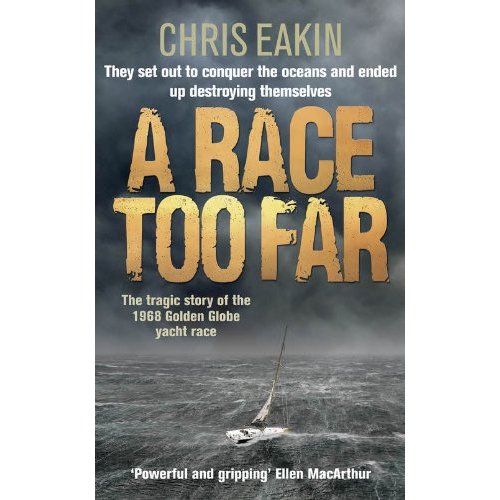 And just what was I reading while cruising aboard Lunacy during the holidays? A book about sailing, of course. I gobbled this one up in no time and can recommend it highly to sailors and non-sailors alike.

But first a threshold question: do we REALLY need another book about the 1968-69 Golden Globe Race???

Apparently we do. I’ve read a great deal about the race over the years, but still I learned a lot from this book. For example… did you know that Nigel Tetley died wearing women’s underwear???

Somehow, in the face of the legend that has grown up around the race over the past 40 years, this strange fact has been neglected. Many (myself included) have always believed that Tetley, who was found hanging from a tree two years after the race, had committed suicide, a victim presumably of the keen disappointment he must have felt after his plywood trimaran, Victress, broke up and sank barely 1,000 miles from the finish after racing all the way around the world non-stop. Had Victress not been lost, Tetley would have won the 5,000 pound prize for fastest passage (Robin Knox-Johnston in Suhaili had already won the prize for first around) and likely would have bathed in never-ending glory (just like Knox-Johnston).

The awful irony, of course, was that Tetley was pressing his boat quite hard when it sank, in spite of its damaged and fragile condition, because he believed Donald Crowhurst was right behind him in his trimaran, Teignmouth Electron. Which he was, except Crowhurst had faked his voyage around the world and instead had spent months diddling around the South Atlantic going nowhere. The irony/tragedy was only compounded when Crowhurst stepped off his boat and killed himself after learning that Tetley had sunk, as he then realized he would win the 5,000 pounds and his fraud would likely be exposed. 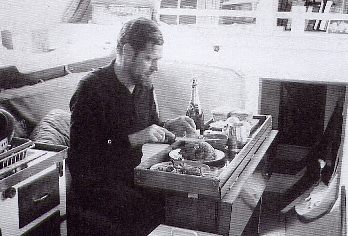 Given all this drama, it always made sense that Tetley had killed himself. But now, in this latest examination of the great race, published late last year in the U.K., Chris Eakin discredits this tidy conclusion. Eakin conducted in-depth interviews with all surviving race participants and with the family and widows of the three famous deceased participants (Tetley, Crowhurst, and Bernard Moitessier, who might have won the race but sailed on around the world again on a lark and died much later of natural causes) and in his book focusses as much on the aftermath of the race as on the race itself. In so doing he gains a valuable new perspective on this seminal event in sailing history.

The true facts concerning Tetley’s death were never secret and evidently were widely publicized at the time. As Eakin relates, they were initially disclosed at a public coroner’s inquest three weeks after Tetley’s body was discovered:

The police revealed he had taken some of his regular clothes off and placed them at the foot of the tree. A constable then listed a variety of women’s underclothes Nigel had put on: a white suspender belt and stockings, and a corset over his head like a hood. He had tied his wrists behind his back. A pathologist suggested Nigel had died during a masochistic sexual exercise.

In the end the coroner ruled out suicide as the cause of death and instead entered an “open verdict” in the case.

What I find staggering about this is not that Nigel Tetley had a kinky side to him, but that we have done such a good job of forgetting it. As Eakin documents in his book, the public quickly ignored Tetley after his voyage while lionizing Robin Knox-Johnston. But has the public chosen also to honor his memory in some sense by erasing from its collective mind the sordid details of his demise? Or is this simply a case of myth overwhelming history? As a narrative the story is undeniably neater and more complete if Tetley kills himself in disappointment, so perhaps our brains are hard-wired to remember it this way.

If so, this is a compelling example of the power of myth. These events occurred only 40 years ago, the true facts are easily discovered, and many interested parties are still alive. Amazingly, we learn in Eakin’s book that Donald Crowhurst’s son Simon, who has always felt quite guilty about his father being the proximate cause of Tetley’s death, only learned of the coroner’s findings on being interviewed by Eakin. According to Eakin, he was quite relieved to learn the truth.

So, of course, there is value in history (as opposed to myth) and much value therefore in this book. It is required reading for any who consider themselves students of the Golden Globe. It is also a good dramatic introduction for those learning of the race for the first time.