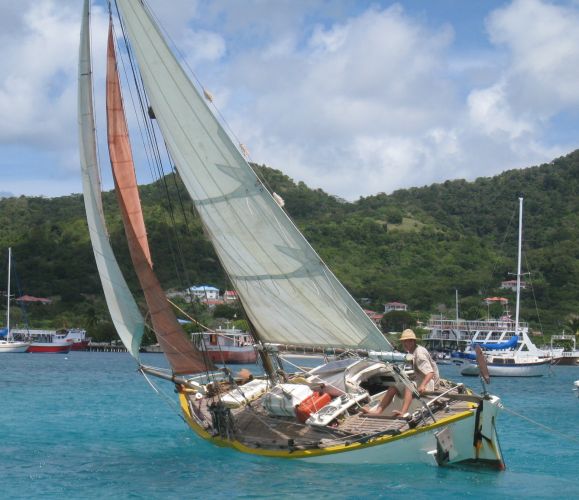 This, my friends, is a small boat with a very large reputation. The reason I’m blogging about her right now is that she happens to be for sale. Unfortunately, I’m getting a bit long in the tooth, but for a certain sort of sailor–you must be young, footloose, and maybe just a little bit crazy–this represents the opportunity of a lifetime.

I first met Plumbelly many years ago while passing through Bermuda, and the sight of her lying against the wall at Ordinance Island stopped me dead in my tracks. This is not an unusual reaction. I don’t know if mere photography can convey just how charismatic this little vessel is, but if ever you see her in the flesh–and flesh is indeed the word for it, as there is nothing plastic about her–you will at once be lost in mad fantasies of micro-gaffer ocean voyaging.

Her owner at the time was a young man from Maine named Daniel Bennett. He was a busy fellow, a boatwright and carpenter, and the mere fact of his being Plumbelly‘s owner somehow meant that Bermuda’s rather strict rules regarding the employment of foreigners didn’t really apply to him. He had places to go, people to see, jobs to do, and we didn’t get to talk much. All he really told me then was that his boat had been built many years ago on a beach in Bequia. And this small bit of information, needless to say, only helped burn the image of Plumbelly deeper into my consciousness.

The next time I met the boat was in the fall of 2004, when I saw her tied up alongside the dock at the Atlantic Challenge Foundation in Rockland, Maine, where I then kept my dinghy. Standing beside her was her new owner, another young carpenter named Patrick DiLalla. We both had a little time on our hands, thus were able to talk at length. Patrick was palpably nervous, but also quite excited. He had owned the boat less than a year and was about to take her offshore, by himself, for the first time on a passage from Maine to Bermuda. He had only been offshore once before in his life, when he sailed as crew aboard a Seguin 44 in the Marblehead-Halifax Race the year before.

By now I had some sense of Plumbelly‘s pedigree and notoriety. Two years earlier, while interviewing Reid Stowe for a story in SAIL, he and I had discussed the early stages of his ocean sailing career and he immediately cited Plumbelly as a major influence. He met both her and her original owner, a young German cruiser named Klaus Alvermann, in the early 1970s in New Zealand.

Reid at the time was living aboard a tiny plywood cruising boat named Vlaag with that boat’s owner and creator, Ivo van Laake. Both Ivo and Klaus had sailed to New Zealand aboard their respective micro-cruisers by way of Tahiti, where they spent time hanging out with Bernard Moitessier, who had just completed his legendary one-and-a-half non-stop circuits of the planet aboard Joshua, after blowing off what seemed to be a certain victory in the epic Golden Globe Race. If you study Moitessier’s account of his voyage, The Long Way, you’ll note both Ivo and Klaus are referenced. Klaus is the one who first uses a flare gun to try and execute the rat pestering the small community of cruisers lying stern to at Papeete, but then later concludes it might be best to feed the rodent instead. Ivo appears in the appendix, where the self-steering gear he designed for Vlaag is described in some detail. It so happens that the self-steering vane that still graces Plumbelly‘s transom today was originally built by Klaus under Moitessier’s tutelage during those salad days in Papeete.

As for Plumbelly herself, Klaus did indeed build her on a beach in Bequia during the mid-1960s. He had help from a local boatwright named Loren Dewar, but he eyeballed the design himself, without plans, and fashioned all the wood that went into her by hand without power tools. She was named Plumbelly because she looked a bit rotund to the boatbuilding pundits who roamed the Bequian beaches in those days. She was launched on December 21, 1965, with the help a few of Klaus’s local friends. 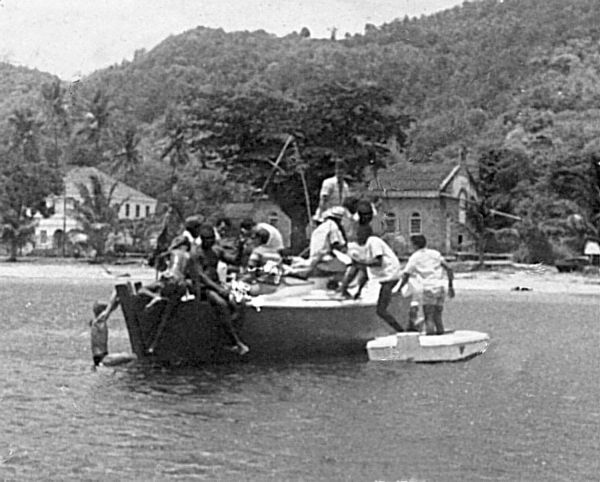 After cruising Plumbelly up and down the W’Indies for a while, Klaus headed west for the Panama Canal and the Pacific Ocean beyond it in December 1968. This was the beginning of two complete circumnavigations that he sailed during the 20 years he owned her.

What Plumbelly did for Reid Stowe was inspire him to build a boat of his own. He in fact built not one, but two–the first was a diminutive Wharram catamaran called Tantra that he sailed across the Atlantic and back with Ivo van Laake as crew; the second is the huge 70-foot schooner Anne he is currently sailing solo in his 1,000 Days at Sea Mars Ocean Odyssey. There is no way of telling how many others Plumbelly may have inspired over the years, no way of knowing how many feats of nautical impudence the sight of her may have prompted.

The next time I saw Patrick was in Bermuda, not long after he finished his first passage aboard his new boat. He had not had an easy time of it. He sailed out of Rockland on a Sunday in mid-October, took three and a half days to reach the Gulf Stream, where he got clobbered by a strong nor’easter. “It was like hitting a tree stump when you’re skiing in powder,” he told me. The boat was knocked down twice in one night, then again the morning after, and Patrick was reduced to bailing madly by hand, as his bilge pump got jammed with debris. But he had faith in Plumbelly: “I told myself as long as I don’t fall off, everything will be alright.”

In all it took Patrick 10 days to reach Bermuda, including one full day he spent hove to. The boat’s staysail traveler got a bit mangled, her masthead light was lost, a spinnaker pole got busted, and one jib was shredded. Other than that, Plumbelly was in great shape. 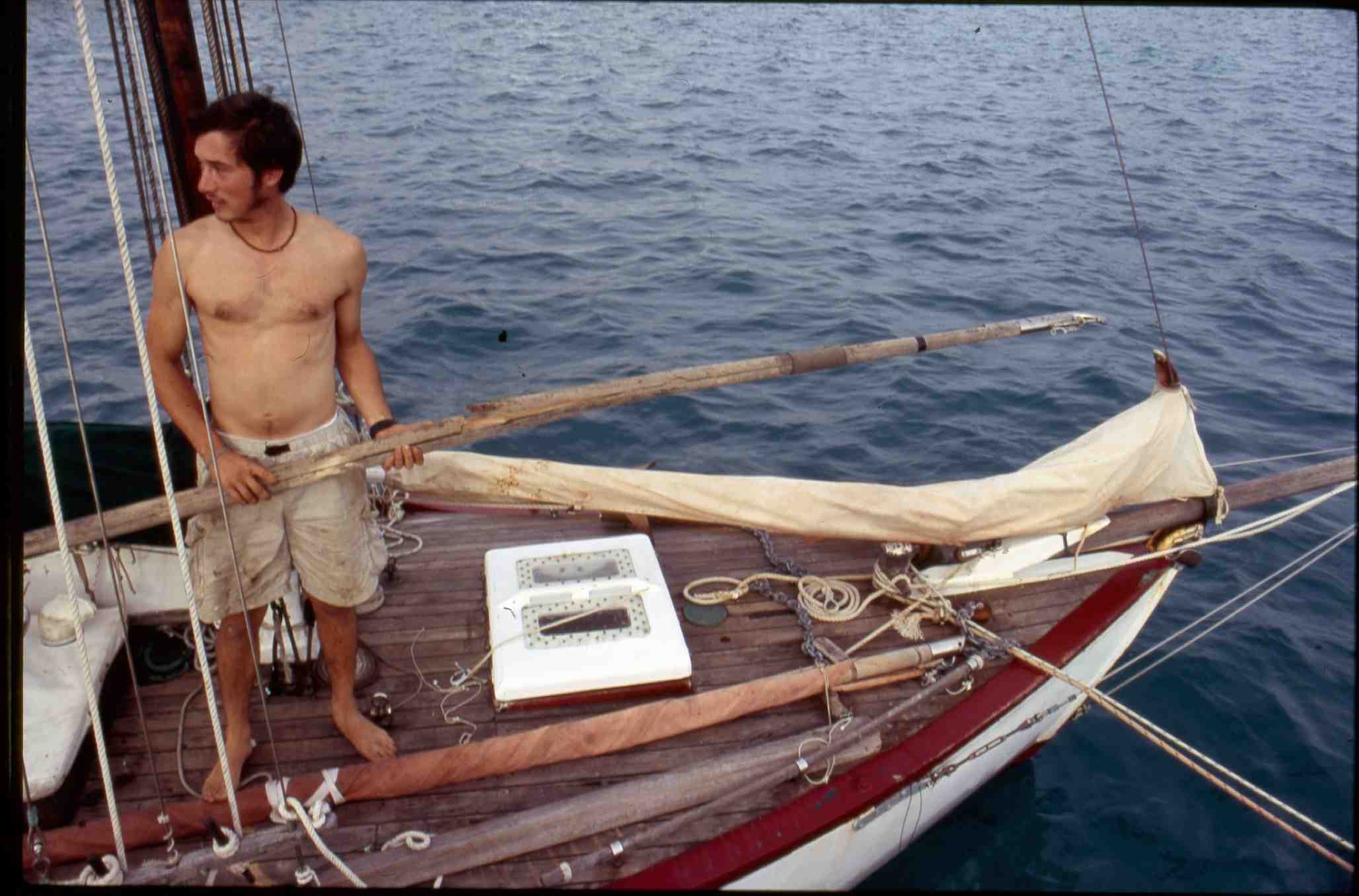 Aside from the ordeal of sailing there in the first place (as Mark Twain once put it: “Bermuda is heaven, but you must go through hell to get there.”), what most struck Patrick about his voyage was how he was received upon his arrival. “Everyone here knows and loves this boat,” he told me. “I was becalmed just outside the entrance to the harbor, and they immediately sent the pilot boat out to tow me in. Then there were 20 people standing at the dock shouting as we tied up: ‘Plumbelly! Hey, Plumbelly!'”

Among others who took a special interest in Patrick because of the boat he was sailing was my good friend Philip Anderson (known to many on the island as Phoopa), who has followed Plumbelly‘s several arrivals and departures from Bermuda over the years.

“You don’t choose a boat like Plumbelly,” Philip told me. “She chooses you, and I think Patrick is a very worthy successor to Daniel. In fact, he’s done better. The first time Daniel came in here he had a broken boom, a broken gaff, and a broken bowsprit and it took him over two months to make repairs.”

In the few years that followed Patrick and Plumbelly went missing for a while from the New England-Caribbean cruising circuit, and when I passed through Bermuda in the fall of 2008, Philip remarked on this. “I am a little worried,” he confided to me. “We haven’t seen Plumbelly here in a long time.”

But she was fine, of course. As I found out last spring, when I once again bumped into Patrick in St. Georges, it turned out Plumbelly had lured the lad across the Atlantic and back. For Patrick these were his first and second transatlantic passages, but for Plumbelly they were transat numbers 27 and 28. Again, as when he first appeared aboard her in Bermuda in 2004, Patrick found that where ever he went–in the Azores, in Portugal, Morocco, the Canary Islands, and even in the remote Casamance region of Senegal in West Africa–people recognized his boat.

This past fall at the Newport boat show I ran into yet another fan of Plumbelly‘s, author Richard Dey, who is, among other things, an unofficial historian of the West Indies yachting scene. He believes Plumbelly is the first Bequia-built boat to have sailed around the world and knows for a fact she was one of the first boats to transit the Suez Canal when it reopened in 1975 after the Yom Kippur war. He has shared with me an account (published in 1980 by the Slocum Society in Volume XXIV of their journal The Spray) he wrote of Klaus Alvermann’s life and his voyages aboard the boat. In it I find that Plumbelly‘s fastest passage under her creator’s command was “one fantastic week” in which she covered 1,120 miles in seven days, or an average of 160 miles a day, which is phenomenal for a heavy boat (5 tons, reputedly) with a waterline length of just 22 feet. Plumbelly‘s “greatest test,” according to Dey’s account, came in December 1971 when the boat was rolled by a freak wave about 100 miles north of New Zealand while Klaus was sleeping below:

Klaus heard a terrible noise, he says, “and then the boat suddenly didn’t go anymore.” With all her gear thrown on top of him he couldn’t get up and had to wait until she came back again–“It took 15 seconds, I counted them, and they were a long 15 seconds.”

On deck he saw he hadn’t lost anything, “only the staysail was not there anymore.” She had shipped “maybe a bucketful of water.” Klaus says he doesn’t forget “how, as I was lying there, she righted herself and went on going all by herself.”

In other words, the boat is very strong, which is not true of most traditional Bequia-built boats. They were built for inter-island commerce and were expected to last only a few years. Plumbelly was conceived from the keel up as a bulletproof bluewater boat. Her construction is very heavy, with a heavy pine deck and topsides, 2.5-inch cedar frames on 11-inch centers, and silver balli (a Guyanese hardwood) below the waterline. All hull planking is at least one inch thick.  Her interior is small, with just sitting headroom; her auxiliary powerplant is an 8-hp outboard motor; her head is a bucket, and her water tanks consists six 5-gallon jerry jugs. For serious voyagers only! Comfort fiends need not apply. 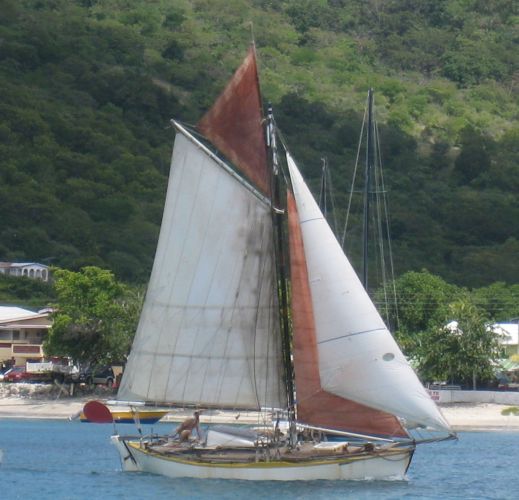