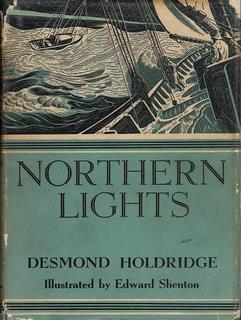 I’ve just finished re-reading this gem of a book, and this has only reaffirmed my belief that it is one the very best cruising tales ever published. The author, Desmond Holdridge, is utterly obscure and long forgotten, but he was a great wordsmith and adventurer in his day. This account is of a cruise he made in the mid-1920s when he was but 18 years old. In a converted 30-foot potato lugger with minimal accommodations and minimal gear Holdridge dared to sail the entire length of the Labrador coast from Newfoundland to the Button Islands and back again in one season. His crew, two older, much more experienced men, bitterly resented his authority over them, but he ultimately succeeded both in commanding their respect and in reaching his objective.

Well, sort of. The cruise does not exactly have a happy ending. I won’t spoil things by describing the final disaster in any detail, but will note that dramatic points along the way include a few near mutinies, encounters with native communities that were completely devastated by the Spanish influenza just a few years earlier, and an uncomfortable missing-persons episode in which two members of the crew are suspected having murdered the other. Plus, of course, there are several nearly disastrous encounters with irresistible forces and immoveable objects. For example:

On the fifth morning of our stay in the fiord, I awoke at dawn a trifle disturbed about something, although I did not know what. The wind’s voice was as loud as ever–or was it? It seemed that perhaps its truculence had become slightly less and the motion a trifle easier. We had, the day before, lowered the centerboard, thinking it might stop something of the schooner’s unchecked rolls. But, just as I made up my mind that the wind must be moderating, a squall struck and I realized that it had not; quickly I dozed off again.

It cannot have been a minute later that a frightful blow was struck our schooner and we rushed out on deck like rabbits.

The Dolphin was in the breakers under a frowning eminence of broken boulders and ice-rounded rock. With every sea she lifted and fell, hard and terrifyingly, on the unyielding sand and rocks, drifting nearer to shore, now only ten feet off, with every blow. I ran forward to retrieve the anchor, which we thought had dragged, but in came twenty feet of cable and then a frayed end; it had parted. The pounding seas bore down on the schooner, heeled over at forty-five degrees from the vertical and, laying her stern against the jagged shore, went to work at the destroying of her.

I dived below and stood in the cabin for a full minute, but in that place it was impossible not to believe the schooner was falling apart, so I came out again and with the other two stepped onto the boulders to watch; for there, at least, you could think, and desperately did we need to. If we had had a small boat and a spare anchor, we might conceivably have launched it, planted the anchor as a kedge, and dragged ourselves off. But we had neither boat nor anchor, so we did an ineffectual-seeming thing. The tide was low and, ripping up the cabin floor, we got out a pig-iron block weighing about a hundred pounds. Around it we secured a wire bridle and to that we made fast the remaining anchor cable. Then, all three together, we flung the contrivance into the deep water on the exposed port side. We pulled it. It dragged. 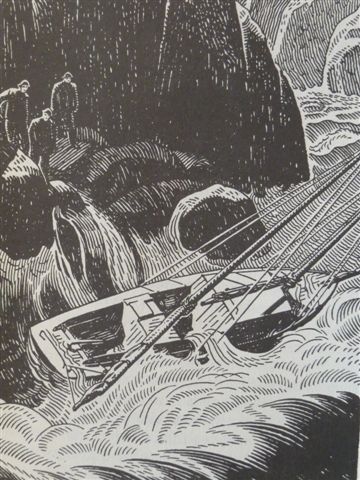 So, for two hours, we carried rocks on board and threw them on top of the piece of pig iron in order to hold it in place; it made quite a respectable heap. We shifted a large quantity of ballast up into the bows in order to lighten her aft and then we sat on shore watching; until the tide came up there was nothing else to do. And during those two hours of constant battering on the rocks the Dolphin did not fall apart, simply because she was light and strong and cunningly fastened. Nonetheless, I expected momentarily to see that the sides had at last been beaten in, for as the water dropped away in the hollow of a wave it could be seen that part of the side, normally curved, was flattening out; had those frames been of the heavy sawn variety, they would have been fractured and the planks would have given way.

As the tide rose–and it was the six-foot tide of the true Labrador, not the thirty-footer of the Hudson Strait–she began to drag farther ashore, but between the pig-iron kedge and desperate poling with our sweep, we held her for half an hour and she floated forward, although the shocks as the sea raised her and dropped her on the rocks was as bad as ever.

As Niels poled and Robbie hauled on the pig iron, I hoisted the reefed mainsail, sheeted in flat, and at that moment one of those great squalls struck us, driving layers of spindrift with it and, using the sail as a lever, hurled the Dolphin over on her side.

Something had to give. The sail had to burst, the schooner had to collapse, crushed between the upper stone of the wind-filled canvas and the nether stone of the boulders on wh ich she lay, or she had to drag herself off.

Robbie hoisted the jib and she dragged herself off.

She made a lunge forward and struck the submerged cairn we had built over the pig iron. She glanced off it and crashed against a boulder. She glanced off that and then, with a tremendous wrench, urged by sail and pole, she wrenched herself free and shot out into the deep water, almost capsizing with the thrust of the mainsail.

Swiftly we dropped the main and jib and replaced it with the reefed foresail, its gaff dropped and lashed to the mast, leaving the sail scandalized, a minute three-cornered piece of canvas that drove us swiftly out of the fiord. We shifted the ballast back to its normal position.

We swore and shouted and thanked God; we were without an anchor, we were not even sure how long the schooner would float, it was September 1, and we were still far north of the tree line, but we were jubilant; the Dolphin was free and homeward bound.

Northern Lights is no longer in print, but used copies are easy to find at abebooks.com and other such sites. The book was originally published in hardcover by Viking in 1939 (I do not think there was more than one printing) and was once reissued in paperback by Capstan Press in 1998.  Both editions are very handsome and either would make a most excellent Christmas gift for a snowbound armchair cruising sailor.