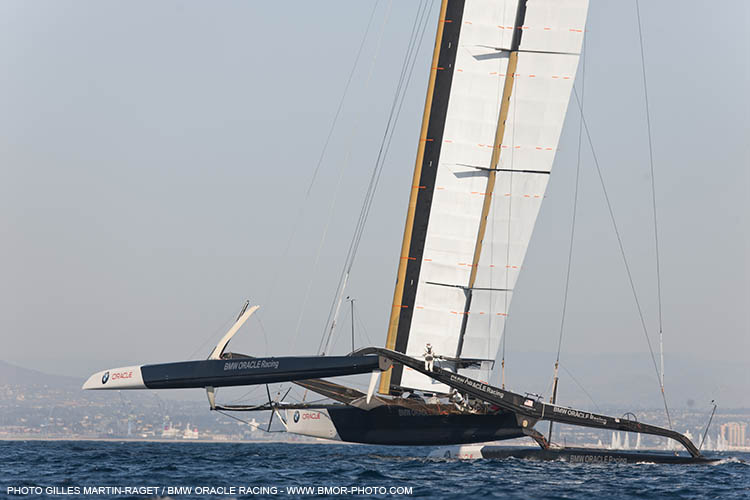 There have been a few developments since my last tongue-in-cheek post about the America’s Cup, so I thought I’d bloviate a bit more on the topic. Don’t worry. I’ll try hard to be serious this time. You’ve probably heard yesterday’s news that a New York appellate court shot down Ernie Bertarelli’s appeal of a lower court decision ruling out RAK as a race venue. I’m sure you know, too, that Larry Ellison last month unveiled a very impressive hard wingsail that has been tested successfully on his BMW Oracle trimaran. Both wing and tri have just been loaded on to a freighter in San Diego and are now en route to Valencia, Spain, for the final showdown with Ernie’s Alinghi catamaran in February. Many are acting now like the legal rumpus must be over and there’s nothing left to do but (finally!) have a sailboat race, but I’m not so sure it will be that simple.

For one thing, Ernie’s cat is still in RAK and it’s not at all clear he’ll be able to get it out. It seems very likely the only reason he appealed the lower court’s anti-RAK ruling was to propitiate the powers-that-be there. He has also promised that if he wins this match the next America’s Cup will for sure be held in RAK. But the sheikhs in RAK have already spent $120 million preparing for this America’s Cup and probably feel like idiots for ever believing Ernie could make good on his initial promise to race there this time around. If I were those sheikhs I’d seize that cat with the quickness and shake down Ernie for some cash reimbursement.

If Ernie does succeed in getting his boat to Valencia and a race does actually take place, it looks increasingly likely the cat will be slower than the tri. Even before the appearance of the wingsail, some expert pundits had predicted the tri would have an edge, and now with the wing that edge can only be much larger. The BMW Oracle team has publicly announced their boat is 20 percent faster than before, and a few folk are now hailing the wing as a revolutionary innovation. This, of course, is poppycock. People have been putting hard wingsails on boats since at least as far back as the 1970s. When Dennis Conner wanted to make his cat impossible to beat in the infamous 1988 AC match, he put a wing on it. There has also been at least one serious attempt to commercialize wingsails and flog them to the sailing public at large. I remember encountering this Walker Wingsail cruising trimaran in a marina in the Azores back in 1995, as it was crossing the Atlantic to hit the American boat shows. 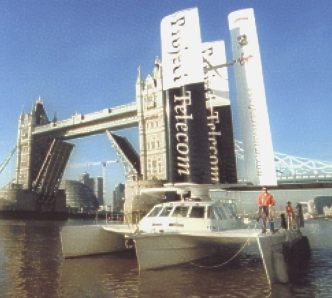 Like Larry’s wingsail, the Walker wingsail was computer-controlled, and though wingsails never have become commercially viable, it has long been clear they have huge speed potential. Indeed, one wonders now why Ernie didn’t try to develop one for his boat.

The fact that Larry’s boat now seems favored only makes it more likely that Ernie will hire more lawyers and file more motions to try to gum things up more in court. Scuttlebutt’s Cory Friedman has done a superb job of providing racing sailors with astute legal analysis through out this long spate of AC litigation, but I have to disagree strongly with the opinion he voiced yesterday: “Much has been written about how the [America’s Cup] Deed [of Gift] needs to be updated, but New York’s courts have demonstrated that the Deed is just fine as it is. The body of precedent this litigation has created has applied the Deed in a thoroughly fair and modern way.”

Cory may actually believe this, or he may (as a lawyer who practices in New York courts) be trying to suck up a bit to some of the judges who might be able to make his life miserable in the future. But it seems very clear to me (as a mere “reformed” attorney, I must confess) that the Deed of Gift that controls AC competition has one deep inherent flaw that will forever threaten the crown jewel of our sport with ceaseless bickering like that which we have witnessed this time around. Thanks to the Deed, the trustee who administers the trust represented by the Cup (the Defender) is also required to compete with some putative beneficiaries of the trust (i.e., all those who might challenge for the Cup) for the corpus of the trust (the Cup itself). This is a gross legal contradiction. The Defender must on one hand behave like a fiduciary, putting the interests of the trust beneficiaries before his own, and on the other hand must strive to gain an advantage over them and defeat them on the race course.

The great miracle of America’s Cup competition isn’t that there has been so much litigation, but rather that there has been so little. Until the Deed is reformed so that the roles of trustee and defender are severed from each other, the threat of litigation will always be present. All it takes is one hotshot sailor with an ego and pockets deep enough to pay some lawyers and it’s back to court we go again.