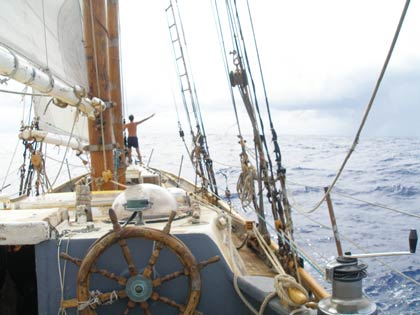 As of Saturday December 12 this past weekend my friend Reid Stowe has broken the record for the longest non-stop solo ocean voyage ever made.  The previous record (658 days) was set by Australian Jon Sanders when he completed his non-stop triple circumnavigation over 20 years ago in 1988.  Reid’s “Mission Control” shore team, which administers and maintains his 1000 Days at Sea website, has also more-or-less officially announced that Reid will finally be returning to dry land in late June of next year and is taking the first steps to organize a homecoming welcoming flotilla.  If you want to participate, just follow the link in the previous sentence and get in touch with Mission Control.

For those with short memories, allow me to refresh your recollections.  Reid first set out from New York City aboard his home-built 70-foot schooner Anne way back in April 2007.  He had one crew-member aboard, a young female photographer, Soanya Ahmad, who had exactly zero sailing experience.  Reid’s stated purpose was to stay at sea for 1,000 days.  As of today he is up to Day 966, thus is a little more than a month away from reaching his original objective.

As you might imagine, there have been a few adventures along the way.  About two weeks out of New York, Reid and Soanya collided with a freighter and Anne‘s bowsprit was severely damaged.  After completing repairs, the pair sailed on together to Australia, where Soanya disembarked from the boat in February 2008.  The transfer was made at sea, courtesy of the Royal Perth Yacht Club, with Jon Sanders participating.  The story at the time was that Soanya was too seasick to continue sailing, but later it turned out she was in fact pregnant.  She gave birth to a son, Darshen, in July 2008 and since then has been living in Queens with her parents, raising the boy and waiting patiently for Dad’s return.  The photo you see here is of Soanya and Darshen at a Stowe family get-together held this past summer on the North Carolina coast, which is where Reid first learned a thing or two about boats. 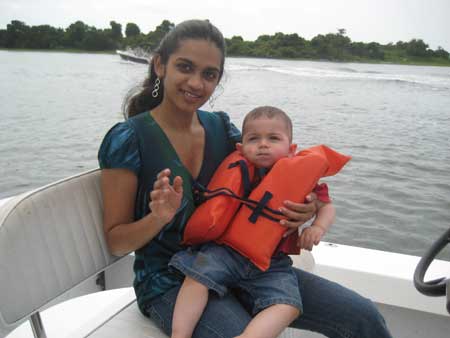 Reid finally rounded Cape Horn west-to-east on his own in January of this year and after suffering a serious knockdown made his way northward into the more felicitous climate of the central South Atlantic.  Since this past summer he has been been sailing very slowly (some would say drifting) off the coast of West Africa.

In many ways saying that Reid has broken Sanders’ record is a bit like comparing apples and oranges.  Sanders is a very conventional, no-nonsense sailor with an extremely linear perspective on the sport of ocean sailing.  His voyage aboard the 47-foot Parry Endeavour was well financed (title sponsor Kevin Parry put up over $800,000 to get it off the ground), the boat was very well prepared, and his immediate goal–a triple circumnavigation (one westabout, two eastabout) conducted mostly in the Southern Ocean–was extremely rigorous.  Reid’s view of ocean sailing, on the other hand, is much more spiritual and expansive.  He is as much a performance artist as a sailor and has always been a serious student of yoga and other Eastern philosophies. 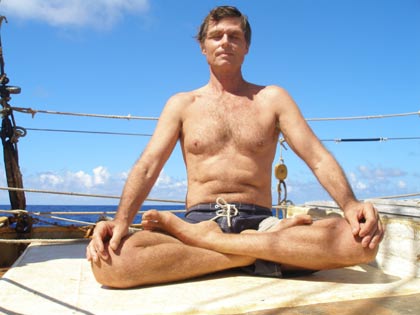 Reid worked hard for more than 15 years planning and preparing for his voyage, but thanks in large part to his off-beat perspective he never succeeded in attracting a big-bucks sponsor.  Several companies and individuals have made small financial and/or material contributions (your correspondent, for example, donated a winch and has also loaned Reid an inflatable tender), but Reid’s effort has always been very much a shoestring affair.  His unique sensibilities have also strongly influenced the course of the voyage.  Reid has often touted his voyage in terms of setting records and as an important “space-analagous” research effort designed to pave the way for a future NASA voyage to Mars, but his goals are also very personal and creative.  For example, two of his biggest accomplishments in his mind are the drawing of two enormous GPS-art figures he completed on either side of the continent of South America.  The one seen here, which he dedicated to Soanya, was completed this past spring in the South Atlantic. 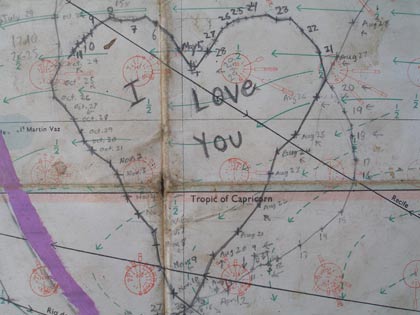 Meanwhile, during his “sacred sideslip” off the coast of West Africa, which is likely to continue until he finally points Anne‘s bow north to New York again sometime this coming spring, Reid has been creating smaller works of art at a furious pace.  The drawing seen here, one of my favorites, depicts the schooner Anne in the midst of a phosphorescent sea with a thunderstorm raging in the distance. 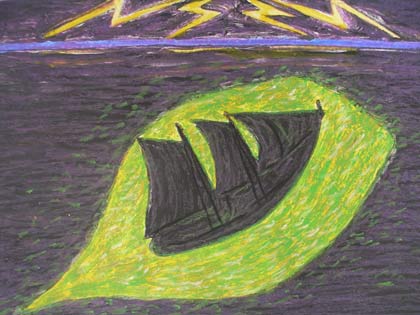