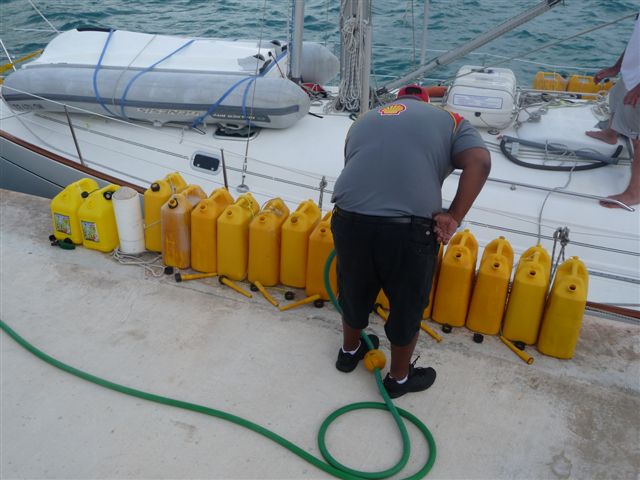 This is a common sight at Dowling’s fuel dock in St. Georges, Bermuda, both in the spring and the fall when the seasonal stampede of migrating yachts passes through.  It never fails to amaze me how many jerry jugs of fuel some bluewater sailors are willing to carry.  In this case I counted 16 jugs open on the quay waiting to be filled and another four on deck.  At five gallons a pop that’s an extra 100 gallons of fuel this crew will somehow lash down on the deck of their 40-foot sailboat.  At 7.3 pounds per gallon (the most generally accepted average weight for diesel fuel) that’s an extra 730 pounds this boat will be carrying well above its center of gravity.  Or to look at it another way: that’s like sailing around with over 900 feet of quarter-inch high-test anchor chain stored on deck.

Is this necessary?  In most cases, I suspect, it really isn’t.  On Lunacy, for example, making the same passage this boat was preparing to make (Bermuda to the West Indies), I carried just one 5-gallon jerry jug on deck for insurance.  I probably have about the same tank capacity as this boat (70 gallons), did lots of motoring on the way down (82 hours), and still had about 25 gallons of fuel left aboard (including what was in the jerry jug) when I arrived in St. Martin.

Over the years I’ve noticed that a lot of cruising sailors aren’t nearly as savvy as they might be about using their engines to get where they’re going.  I can’t count how many times I ‘ve seen sailboats bashing violently into big head seas with their sails down and their engines running close to full out, burning tons of fuel while crawling along at ultra-slow speeds with their crews experiencing maximum discomfort.  Sometimes I wish I might be magically transported aboard one of these vessels so I can slap its skipper upside the head and ask: “Do you really enjoy paying more money and creating more pollution just so you can waste more time and be more miserable aboard your boat???”

Yes, my friends.  There is a better way.  Just because it’s time to fire up your auxiliary engine doesn’t mean it’s time to stop thinking like a real sailor instead of like a stink-potter.  You should almost never drop all your sails when you start motoring, except when the water is flat calm and there isn’t a breath of wind to work with.  In most other cases keeping some sail up and using it wisely will certainly help ease the boat’s motion and in many instances will also help the boat move faster while burning less fuel.

The most common scenario, as noted above, involves motoring against headwinds.  Many cruisers sailing on a schedule like to use their engines to avoid the drudgery of tacking back and forth a lot to get to a destination.  Once the engine is running, it may be tempting to think you can just drop your sails and steer directly to where you want to go, but usually you’re better off keeping the mainsail up and motorsailing into the breeze at an angle, even if it means you still have to throw in a few tacks along the way.  If you keep your main on the boat’s centerline and flatten it as much as you can (by tightening its halyard, outhaul, and boomvang and easing off its topping lift) you’ll be surprised how tight an apparent wind angle you can maintain (usually less than 20 degrees) while still keeping the sail filled with air.  Because you’re relying on the engine to create most of the drive, you can get away with the super-flat sail shape, but the sail will still greatly stabilize the boat’s motion and will also add some extra speed.  In situations where you don’t have to maintain a super-tight angle, you can bear off a little, put more shape in the sail (or maybe even roll out the jib, too) and enjoy even more free speed.

Just like when you’re sailing, when motorsailing you should think in terms of balancing your sails, but with the engine and the propulsion it creates as another factor in the mix.  Indeed, running the engine complicates things a bit, because you need to be aware of its vulnerabilities.  For example, it is harmful for many marine auxiliary engines to heel too much while running, as this prevents the lubricating oil inside from being properly distributed about the engine block.  As a rule, you should not motorsail with your boat heeled past 20 degrees unless you know for a fact your engine can tolerate it.  To find this out you should check your engine’s operating manual or you may need to consult the manufacturer.

It is also not good for a diesel engine to run hard in gear while making only a small contribution to the boat’s forward motion.  In an ideal motorsailing scenario the engine is creating most of the drive and the sail or sails are helping out a bit.  But if it’s the other way around, with the sails doing most of the work and the engine adding only a little speed without shouldering much of the real load, you may do the engine some harm in the long run.  Diesels like to run under heavy loads, as operating temperatures otherwise stay a bit too low.  When this happens, condensation may form inside the engine, which can lead in turn to carbon deposits that may cause damage.  Also, some transmissions don’t like to have prop shafts spinning much faster than the shaft speed delivered by the engine.  In most cases, therefore, if there’s enough wind for your sails to being doing most of the work of moving the boat, you should bite the bullet and shut down the engine.

One important tool to use when trying to figure out whether you are motorsailing productively is your GPS.  Try different sailing angles, sail configurations, and engine RPM settings and compare your actual speed over the ground (SOG) to your velocity made good (VMG) toward your destination.  If you are sailing off at an angle with your engine running and your sails up and your VMG is higher than it is when motoring or motorsailing toward your destination at a perfectly flat or otherwise more direct angle, the larger angle is obviously more productive.  The situation is similar to one in which under sail alone you must choose between pinching to windward to resist losing ground to leeward or footing a bit to maintain speed.

Likewise, it is also a good idea to power down once in a while and put your engine in neutral so you can evaluate how hard the engine is really working compared to the sails.  If you lose only a little speed with the engine in neutral, it is often a good idea to stop motorsailing and start sailing instead.  In some situations you may find there is only a small decrease in SOG, but the working apparent wind angle becomes so much wider that your VMG goes right in the toilet.  Here you may want to keep motorsailing but increase your engine RPMs so that the engine carries more of the propulsion load and is not underworked.  Another alternative is to depower the sail by flattening it out a bit.

Motorsailing is least likely to be productive when the wind is abaft the beam.  At these much wider sailing angles the increase in speed created by the engine decreases the apparent wind speed, which makes it harder to keep the sails working properly while motorsailing.  In many cases, if there is enough wind to really fill the sails while motorsailing downwind, you probably would be just as well off using only the sails in the first place.  If the sails are not filled with air and are just slatting about most of the time (this is also and especially true when going upwind) you should usually take them down and proceed under power alone.  For if the sails are flogging about and are not really working as sails, they are only creating resistance and will slow you down.  In some cases, however, if the wind (apparent or otherwise) is light and there is a lot of residual ground swell to cope with, you may be more comfortable with a sail up, as it will help keep your boat from rolling too much, even if it is banging around a lot.  This, however, can be hard on a sail, so you must balance the value of your comfort against the health of your canvas.

One important thing to keep in mind in those situations where it does make more sense to motor with no sails up is that a relatively small reduction in speed often results in surprisingly large increases in fuel economy.  In recent independent studies he conducted as part of his EU-funded HYMAR (Hybrid Marine) project, systems guru Nigel Calder has found that on his Malo 46 Nada he can reduce fuel consumption when motoring by 50 percent by cutting back from the boat’s maximum hull speed of 8.28 knots by just one knot to 7.28 knots.  A reduction in boat speed of two knots to 6.28 knots resulted in a 75 percent reduction in fuel consumption.

Needless to say, savings like this makes it very easy to keep your deck clear of jerry jugs on long windless passages.