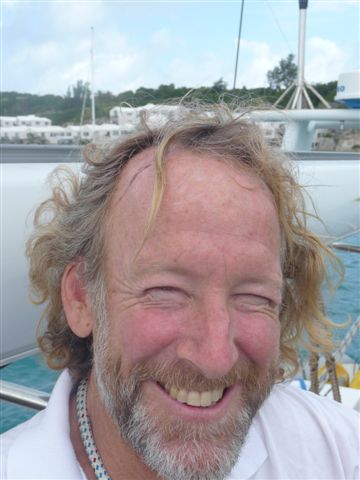 As I mentioned in the last edition of the Lunacy Report, sailing to Bermuda from New England in the fall is always the hardest part of getting south for the winter season in the Caribbe an.  This year was no exception.  Though Lunacy made it in good form after a delayed departure (knock on wood for that), I encountered a few other vessels in the anchorage at St. Georges last month that weren’t so lucky.  At the top of the list was a strong 52-foot steel cutter, Cha Cha, skippered by Rich Littauer.  If you examine today’s lead photo closely, you’ll notice Rich is sporting a rather scraggly scar on the upper portions of his noggin.  It represents only one bullet point on the long list of his misfortunes.

Rich departed Newport on Monday November 2 with one crew member aboard, a woman named Gail from the U.K. whom he enlisted from an online crew-finding service.  They had a brisk northeasterly to speed them on their way.  At about 0530 hours on Tuesday, as he was clambering from his berth to puke in the toilet (he started feeling seasick soon after the voyage began), a wave pitched Rich across the boat head first into the head door.  Much blood was shed.  Gail patched up Rich as best she could, the two them puking seriatim into a pail stuck between them.  By the end of that day the wind was in the northwest, blowing 30 knots.  An accidental jibe took out one running backstay and also destroyed the roller-reefing mainsail’s boom-traveler car.  On Wednesday the wind was lighter, but Rich’s luck was not improving.  Soon the staysail’s furling drum seized up and Cha Cha‘s nav lights started failing.

By Thursday afternoon the wind was back in the northeast and building again.  That evening, just as Rich decided to reef the genoa, the wind suddenly cranked up to 40 knots.  Rich had to blow the sheet to keep the boat on her feet, and the big headsail ended up a bit shredded, while the sheet got flayed and tied full of “wind knots.” 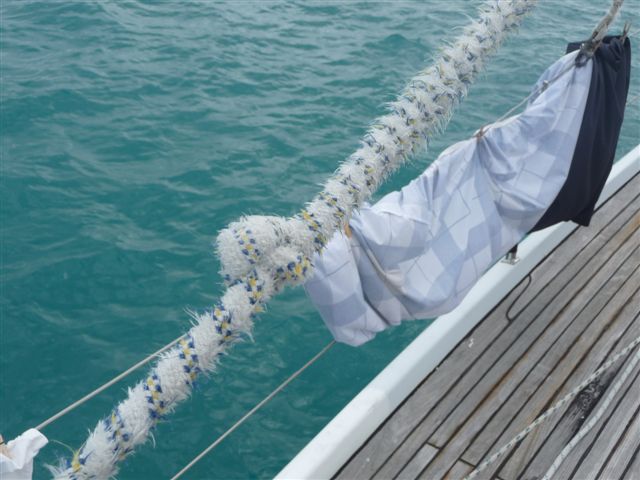 Then the mainsail outhaul parted.  Rich managed to furl the main back into the mast quickly, but now it too was on the disabled list.  Over the next 30 hours the wind increased to 50 knots (57.6 was the maximum speed observed on the wind instruments) with the boat running off under bare poles.  Breaking waves started coming aboard, the undersized cockpit drains somehow got plugged, the electric bilge pump failed, and Cha Cha‘s crew spent much time pumping out the boat by hand.  Over the course of Friday the boat covered an impressive 150 miles in 24 hours with no sails up.

On Saturday the wind abated, but now Cha Cha had no sails and no engine (it already had compression problems before the boat left Newport) and was still 250 miles from Bermuda.  The SSB radio had failed, so Rich started putting out Pan-Pan calls on his VHF.  While waiting for a response he discovered his generator had quit and the steering system had failed. Eventually a Westsail 42, Paragon, skippered by a singlehander named Drake Roberts, answered Rich’s VHF hail, diverted 20 miles, and took Cha Cha in tow.

Paragon towed Cha Cha all through Sunday and Monday, making good about 130 miles toward Bermuda.  By Monday night, however, the wind had shifted into the southeast, right on the nose, and was building and progress became painfully slow.  Then early Tuesday morning shortly before sunrise Paragon‘s autopilot freaked out.  As though possessed by a demon, Paragon suddenly reversed course and smashed bow-sprit first into Cha Cha‘s starboard quarter and then into her port quarter, crushing her hull and taking out a good portion of the lifelines along both sides. 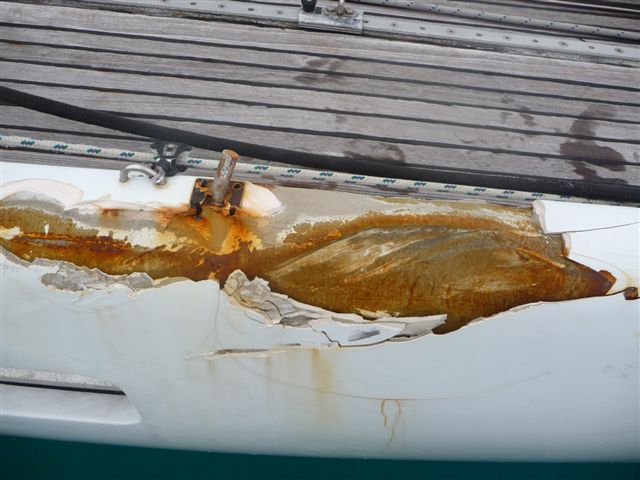 This at least is what Rich told me (and committed to writing in an e-mail to his friends and family that he also shared with me).  I never did speak with Drake.  Apparently there may be another side to this story, as just now I find he has written a glowing testimonial about his autopilot’s performance during this episode that has been published online.

Whatever happened, according to Rich another sailboat then appeared, a large mega-yacht, Titan 14, and she agreed to take over the tow from Paragon.  In just five hours, Titan succeeded in towing Cha Cha the remaining 30 miles to the entrance at St. Georges Harbor, where the local pilot boat took over.  By the end of day Tuesday, Cha Cha was safe and secure inside the anchorage.

When I met and talked to Rich just a couple of days later, I have to say he seemed almost serene, though his immediate prospects were grim.  He has little more than $100 in his pocket, and though his boat is well stocked with food, he has no idea how he will repair it and depart from Bermuda.  It was clear to me that Cha Cha probably needed a full refit before she ever left Newport and that Rich’s biggest problem is that he owns more boat than he can afford to maintain.  Apparently Cha Cha‘s previous owners had the same problem, as they hired Rich as a skipper to run the boat, but then couldn’t afford to pay him.  After Rich worked without pay for over a year, they threw up their hands and simply gave him the boat. 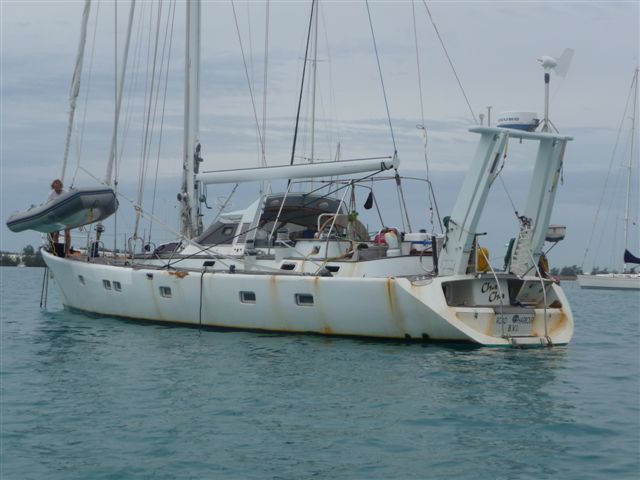 When Rich asked for advice, I told him I thought he should sell the boat.  For those who might be interested, it looks to be a serious ocean boat.  It has a steel hull (skinned with some sort of compound, as you can see in the damage photo above), teak decks (that need replacing), very nice joinery below, and was built in South Africa.  Rich says he doesn’t know who designed it.  I though maybe it was a Dudley Dix, but after checking out Dix’s website I’m not so sure.  My guess is it might be worth a shade under $100K right now, but needs at least another $100K put into it.  In cherry condition it might be worth at least $250K, perhaps a bit more on the European market.  If you want to make Rich an offer he can’t refuse and simplify his life a bit, you can reach him at rich.littauer@gmail.com

Another immediate casualty I encountered at St. Georges was a motorsailer named Idunn, which obviously got its deck-saloon windows blown out somehow.  I didn’t have a chance to speak with its inhabitants, so unfortunately I cannot share details. 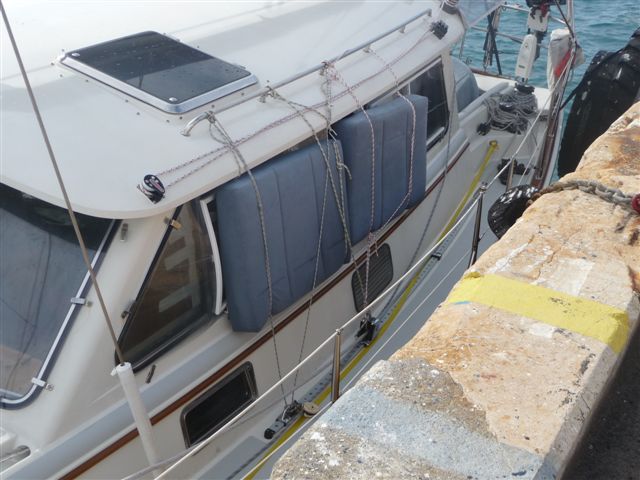 There was another boat, Majik, a Beneteau, that arrived the same time as us while taking on 20 gallons of water an hour, theoretically through a big crack the crew later found in the boat’s anchor well up forward.  Yet another less immediate casualty was this boat, a small Cape Dory, that I heard was dismasted en route to the Azores last August. I also heard a new mast had only recently arrived and the boat soon would be re-rigged and on its way. 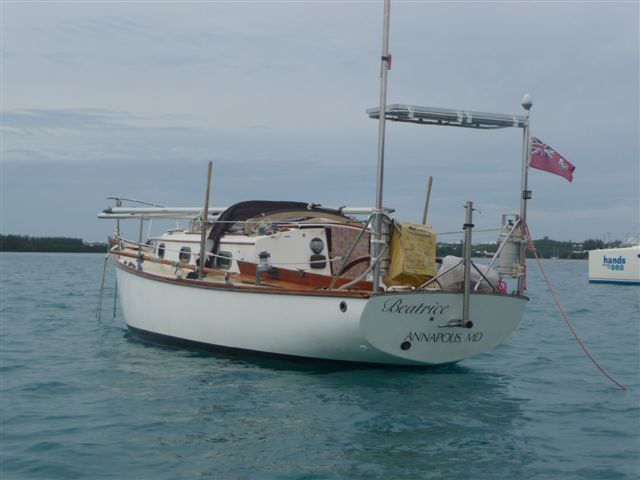 Last but not least we have this wounded folk, my good friend Rich Malone, skipper of Aurora, which was also passing through on her way south for the season.  Rich has only recently recovered from a bit of unscheduled open heart surgery and was very anxious to share his scar with all you WaveTrain riders. 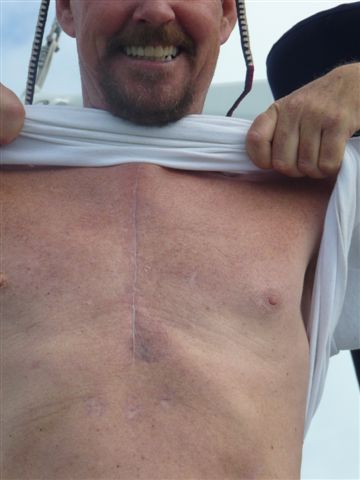