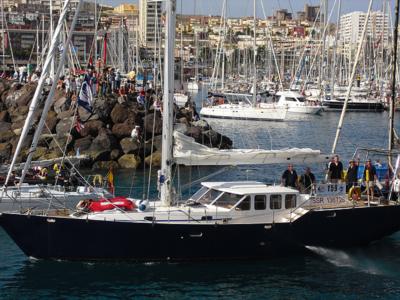 Organizers of the Atlantic Rally for Cruisers, the Big Daddy of all cruising rallies, with 223 boats currently en rout e from the Canary Islands to St. Lucia, announced Tuesday that a participating boat, a 53-foot Bruce Roberts cutter named Pelican (pictured here prior to the rally start), was abandoned Monday about 325 miles west of the Cape Verdes.  This is the second ARC boat abandoned so far this year, the first being a 53-foot one-off race boat, Auliana II, which was abandoned November 23, just 36 hours after the rally start in Las Palmas de Gran Canaria.

I always hate to second-guess decisions like these, because you never really know what the situation was unless you were right there onboard.  But I also know that modern communications technology can make it easy to get off a boat before it might really be necessary.  This is definitely one of those hard calls I pray I personally will never have to make.

Evidently the first boat, Auliana, lost its rudder for reasons unknown.  An effort was made to tow the boat back to port, but the boat’s deck cleats couldn’t stand the strain and pulled out of the deck.  Efforts to get a line around the mast were for some reason unsuccessful, so in the end the decision was made to permanently evacuate the eight members of the mixed German/Norwegian crew and leave the empty sailboat afloat.  A tragedy, indeed, as Auliana was in the racing division and promised to be competitive, having won her division start off Las Palmas.  Clearly she is lightly constructed and presumably was fast.

Details on the most recent abandonment are even more mysterious.  The five British crew aboard Pelican cited a rig failure as the reason they needed to get off, but there are no details so far.  Apparently the boat’s engine was down (the crew said they could not motor) and the skipper considered the rig too dangerous to use.  The crew transferred to a merchant vessel, Crimson Mars, and are now aboard her making an unsheduled trip to Gibraltar.  Again, the empty yacht was left floating.

Interestingly, the abandonment disease so far has been restricted to 53-foot boats.  There are six more in the fleet still inhabited by their crews, so we’ll keep our fingers crossed for them.

As we go to press today, the two lead boats in the rally are Bagheera, a Wally 80, and Big One, a Volvo 60, with just three miles separating them.  Both are expected to reach the finish line in St. Lucia tomorrow.