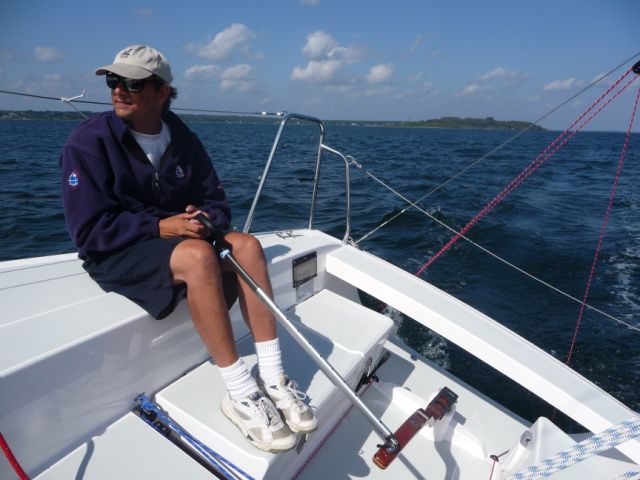 There are worse fates to be endured in this workaday life than getting to sail a new J/Boat with Al Johnstone on a gorgeous fall day on Narragansett Bay.  Conditions were just about perfect: bright sunshine with a brisk southwesterly blowing 15-18 knots and looking to get brisker.  Al, who designed our ride, the new J/97, told me beforehand what he was shooting for was an entry-level sprit boat that would be a tad less intense and intimidating than the very popular J/105, but would still be fast and fun to sail.  At the conclusion of our little outing I had to admit he has hit this nail on the head.

The 97 is built in France and has been moderately successful in the European market with 8 boats already delivered and 6 more in build (as of our mid-September test sail).  We sailed hull number 6, which was sent over to test the U.S. market, and according to Al the boat will also be built here if demand is sufficient.  In putting the boat together Al decided to move the mast aft a little bit to increase the foretriangle size to allow for a somewhat bigger jib that just overlaps the main enough to drive the boat well in light air.  To increase stability, he also made the boat a bit beamy compared to the J/105 (it is just as wide as a 105, but 3 feet shorter) and lowered its center of gravity.  He also made it a tad heavier, and it carries about 850 pounds more displacement than the 105.

Though the main is proportionally smaller due to the enlarged foretriangle, it is still big enough to drive the boat well on its own.  We sailed out of Newport harbor under just the main after dropping our mooring and had no trouble dodging traffic or other moorings as we wriggled out to open water on the bay.  Once out there I threw in a few quick tacks, and the bow pivoted quickly and cleanly through the eye of the wind.  We then unrolled the jib and started beating out into the building chop.  The boat’s motion was smooth, with no pounding, and the helm was both very responsive and predictable.  On every J/Boat I’ve ever steered I have always delighted in how easy it is to find the groove and stay in it, and the 97 is no different in this regard.  It also isn’t twitchy.  When I let the tiller go, the boat rounded up slowly and deliberately instead shooting up instantly head to wind.

To my surprise I found the helm was just as stable after we turned downwind.  We sailed off on a quick broad reach, and as Al scrambled up on the foredeck to prep the asymmetric spinnaker for launching I sorted out the spin sheets in the cockpit.  Steering with my knees as I untangled the lines, I found again the boat changed course slowly and deliberately when the tiller was let go.  After fiddling a bit, I even got her to steer herself for a while.  To my mind this was a bit unprecedented—never before have I seen a boat with such fine foils that could sail a broad reach in a good breeze without a hand on the helm.  This made it much easier for me to tail the halyard and trim the sheet as Al hoisted the A-sail.

Now that we have a spinnaker up (flying from the end of a 6-foot carbon-fiber sprit no less), this traditionally is where I should remark on how fast the boat can go.  I can say that we were moving very nicely, but I cannot cite exact speeds, as our test boat had no instruments.  Al did have a GPS-enabled iPhone in his pocket, but we couldn’t quite read the screen in the sunlight and lost the GPS signal down below (which should perhaps be a lesson to any smart-phone owners who think they need no longer carry GPS receivers on their boats).  I can cheat, however, and point you to a review in the October issue of Yachting Monthly, where Chris Beeson reported hitting 9 knots on broad reach under a spinnaker in conditions very similar to ours.  Upwind under working sails he reported speeds up to 6.5 knots.  All of which conforms nicely with the 97’s predicted-speed polars. 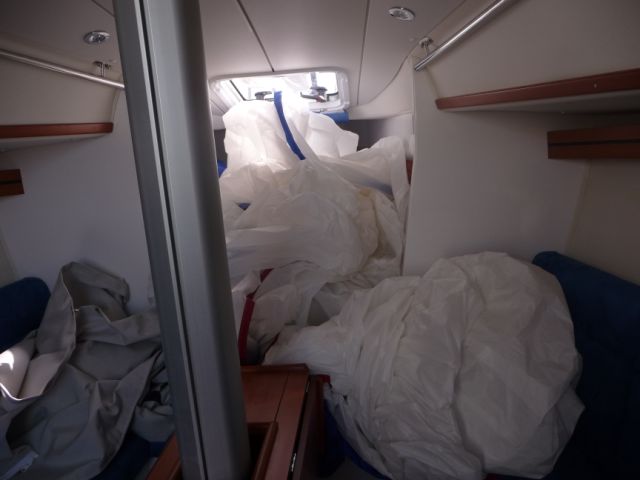 Nor did we have a spinnaker sock on our test boat.  Again, however, because I didn’t have to pay too much attention to the helm, I had no problem nursing the halyard as Al pulled the chute down into the forepeak after we decided it was time to head back to Newport.  By now the wind was up around 20 knots.  Beating back down the bay, however, the boat did not feel at all over-canvased and stayed comfortably on her feet without heeling too much.  We did have to play the main a bit, but there was no need to even think about reefing.

In terms of its accommodations, the J/97 is hardly a cruising palace.  At J/Boats they never really sacrifice sailing performance to make a boat bigger or more comfortable inside, and the 97’s lay-out is in keeping with this tradition.  I can say, given how long the cockpit is (about 7 feet), that the interior, for a 32-footer, is surprisingly large.  The open Euro-style V-berth up forward probably isn’t quite big enough for two normal-sized adults, but it would be fine for one ad ult or a couple of kids.  There is a full-size double aft, plus the two saloon settees are long enough to make good single berths.  The galley and nav station are a bit undersized, but the head is perfect, situated aft with the toilet oriented fore-and-aft, so it is easy to stay comfortable when taking care of business while the boat is heeled.  The amount of storage space overall is a bit limited, but is certainly adequate for short coastal cruises.

All in all, especially given how easy she is to sail, I’d say the J/97 should work very well as a racer/cruiser that can both get competitive around the buoys and double as a family weekend boat.

Construction, by the by, is exactly what you’d expect on a J/Boat: biaxial and uni-di glass fabric SCRIMPed over an end-grain balsa core (both hull and deck).  The outer hull laminate layers are set in vinylester to resist blistering.  There is an integral stringer grid to stiffen the hull, plus all bulkheads are bonded or glassed to both the hull and deck.  The rig is aluminum.  Base price is $169.9K. 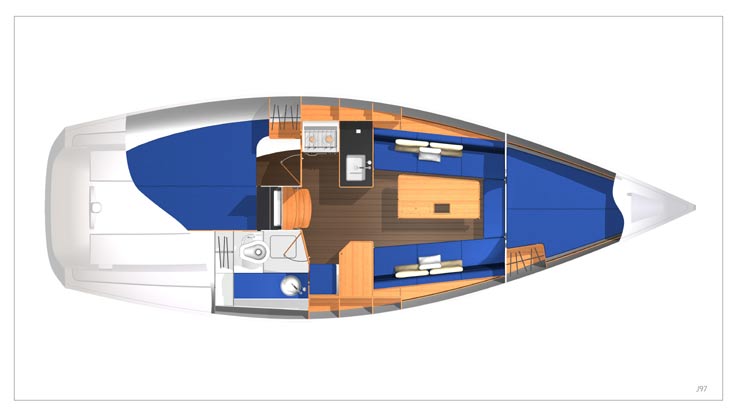