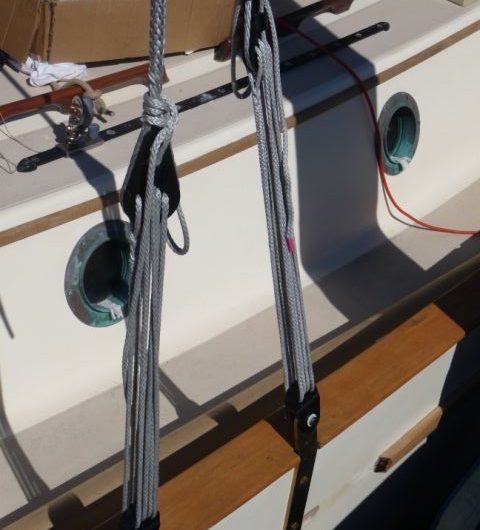 In its own way this may have been the most important in-the-water exhibit at this year’s Annapolis show.  No salesmen, ho hype—just a team of riggers changing out the standing rig on a 30-year-old Westsail 32.  What was significant was the material they were using.  No wire, no toggles, no turnbuckles.  Instead all the new standing rigging was Dynex Dux braided fiber rope (from Colligo Marine) secured in place with old-fashioned deadeyes and lanyards.  Just how ironic is that???  Let us count the ways.

First, high-modulus fiber rigging is all the rage on high-performance race boats because of the tremendous amount of weight it saves aloft.  The parts of a Dynex Dux standing rig, for example, weigh only about one-sixth as much as an equivalent rig composed of traditional 1X19 stainless-steel wire.  To put such a “high-tech” material on a terminally heavy, slow cruising boat like the notorious “Wetsnail” seems almost oxymoronic.  Except this material doesn’t really look high-tech, does it?  It is, after all, just rope, and rope is what sailing vessels used for standing rigging for thousands of years before steel wire ever came along.

That rope rigging is all hip and cool and cutting-edge again is just another example of how new sailing technology is often nothing more than recycled old technology everyone almost forgot about.  But I had to wonder if the deadeye-and-lanyard bit was perhaps taking this a step too far.  I asked one of the riggers how they manage to take up enough tension on the lanyards to keep a modern Marconi-rigged mast in column when it is loaded up and sailing.  He explained that they take the end of each lanyard to a halyard and heave on it with a winch.  And how do they tie off the lanyard without losing any of the tension on the line???  Turns out the body of the deadeye has a clever little cam cleat on it.  A beautiful example of how the old and new often complement each other perfectly aboard a sailboat. 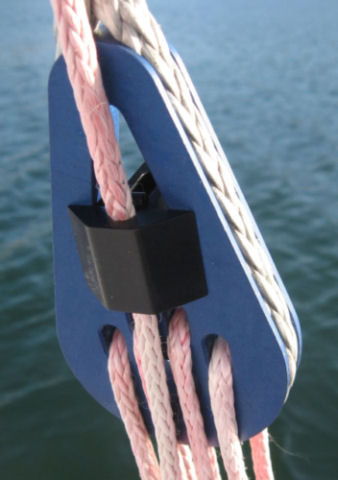 More than anything, the seemingly anomalous sight of an old Westsail trying on a new suit of fiber rigging made it clear to me that this IS the future.  Some pundits predict that Dux rigging will be the new standard within just five years.  Among these is Nigel Calder, who tells me he’s planning on putting a fiber rig on the latest super-high-tech iteration of his cruising boat Nada.  I think it may take longer than five years, but I agree that Dux, or something like it, will likely replace wire rigging altogether over time.

After all, even now Dux costs only a little more than wire rigging, weighs much less, and when sized properly to account for the creeping inherent to any braided line (keeping working loads much lower proportional to ultimate breaking strength is evidently the best way to reduce line creep, or what they call “constructional stretching”) it is also much stronger.  Once we get to the point where Dux is actually cheaper than wire, you’d probably be a fool not to use it.

But one big issue for cruisers to consider is UV resistance.  The best high-modulus fibers have always been UV-intolerant and break down quickly when incessantly exposed to the sun.  Fancy high-end race boats have favored PBO (and more recently carbon-fiber) rigging for some time, but these materials have a relatively short working life because they hate sunlight so much.  Dyneema, the base fiber from which Dux is made, is much more UV-resistant (and also much cheaper) than PBO or carbon, but it is nowhere near as resistant as stainless steel.  Colligo Marine claims Dux rigging has a working life of 5 years or more and compares this to what it claims is a recommended 8-year interval for replacing a steel rig.  But the comparison is a bit disingenuous.  Most sailors I know will keep a steel rig going much longer than that.  The standing wire rig I recently replaced on Lunacy was over 20 years old and really showed no signs of serious wear.  Some folks thought I was a bit of a Nervous Nelly to replace it at all.

I expect, however, Colligo will succeed in improving Dux’s UV resistance.  One obvious ploy would be to sheath it with something, which would add some weight, but should also greatly increase life expectancy.  And even if it never achieves the life expectancy of steel, I think the great weight savings of Dux over steel will still ultimately make it the material of choice, even for lazy slowbones cruisers like me.

I do NOT expect that deadeyes and lanyards will ultimately replace turnbuckles.  As much as it warms my heart and tickles my irony gland to see them, and as clever as the cam-cleat thing is, it still looks like way too much trouble to me.  Watching the riggers work in Annapolis, it seemed it took a lot more time to tension the rig than it would have with turnbuckles.  Turnbuckles in particular make it very easy to fine-tune tension on stays or shrouds, which is important in a Marconi rig.  Having to take up a little bit here and ease a little bit there all over the boat with halyards and winches and what-not would drive me crazy. 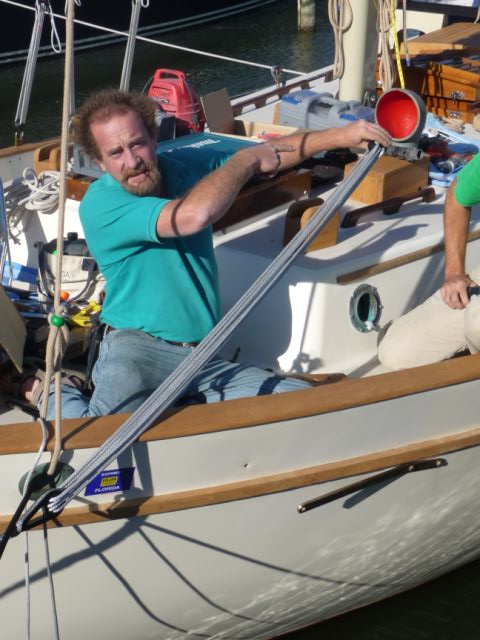 Which is why my next new rig will probably look something more like this: 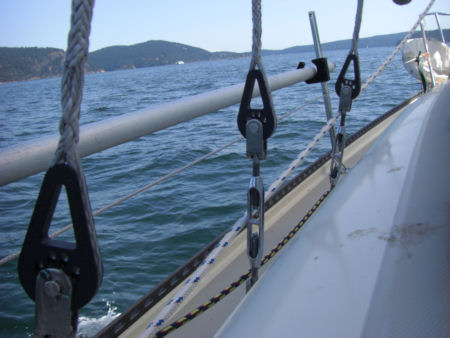