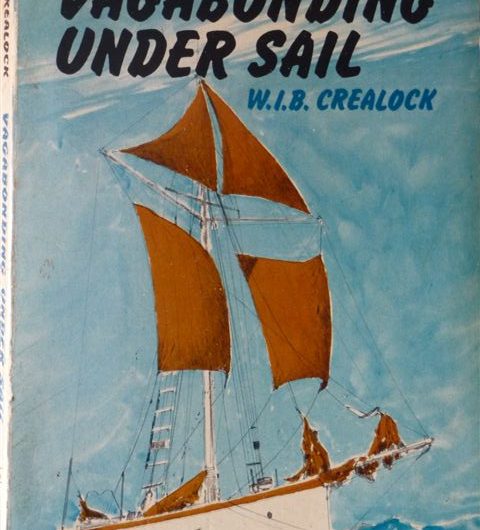 Most would agree that British-born W.I.B. “Gentleman Bill” Crealock was one of the most influential cruising sailboat designers of the 20th century.  Some might even say he was the most influential.  Back in the early 1970s he massaged an obsolete Eric Atkins design to help create the Westsail 32, the iconic traditional fiberglass sailboat that put the sport of cruising under sail on the cover of Time magazine.  The boats he created after the 32, the Westsail 42/43 and several Pacific Seacraft boats that followed in its wake, were great improvements on the original Atkins template and are still deemed some of the most desirable cruising boats ever built among certain elements of the sailing cognoscenti.

The gentleman, alas, has recently died (on September 26) of complications of a broken hip at age 89.  He will be sorely missed by all sailors who knew him and/or his boats.  What I shall most remember him for is a delightful book he wrote when he was still a young man.  First published in 1951, Vagabonding Under Sail recounts a voyage undertaken by Crealock and three young friends aboard an antique wooden gaff-rigged cutter named Content.  After prepping the boat in Britain, Crealock and company (including a very worthy canine named Rum Swizzle) spent over two years wandering the North Atlantic from North Africa to South America and the West Indies, landing eventually in New York.

Crealock also voyaged through out the South Pacific during the 1950s before settling down in southern California in 1959 to work as a designer.  There he fell in with various boat-loving movie stars and became well known in Hollywood circles.  He wrote one other book, Cloud of Islands, published in 1955, about cruising the South Pacific.  I haven’t (yet) read this later tome, but I can highly recommend Vagabonding.  Crealock was a very warm, literate narrator and this book has long been one of my favorites.  I have always remembered one passage in particular very clearly, about the joys of setting a square rig while running down the tradewinds, and shall herewith inflict it upon you:

At last, after 17 days we had found our trades and we stowed our fore and aft canvas and jubilantly set the square.  After an hour’s work we sat back and looked up at the triangular raffee pulling above each yard, and at the squaresails and bonnets beneath.  There seemed a welter of ropes festooned over the boat; a lift, a fore brace and after brace for each yard, and halliard, outhaul and sheet for each of the sails; but in practice the squaresails could easily be hoisted or lowered by one person.  A few days later we lowered every sail to examine it for signs of chafe, and also examined every foot of rope.  Neither then, nor at the end of our crossing, did we find any chafe.  The raffees proved to be the most valuable sails, area for area, for it is very important in ocean work to carry as much sail as possible well above the interference of the long ocean swell.  Our total area turned out to be a little under 500 square feet.  Six hundred would have been better.

During the next few days the wind settled down to its steady 15 to 20 knots from the northeast, and our daily run climbed above the 100-mile mark and hovered around 120.  About this time, when we were not quite halfway across, we tried experiments with the rig.  After disentangling ourselves from the resultant web of gear, we discovered to our delight that Content would steer herself with the tiller free, the wind fine on the starboard quarter, and the starboard yard swung slightly forward.

For 10 days the helm was not touched.  We were hundreds of miles from any steamer track, and we stood no watches by day or by night.  With the bit between her teeth the old boat took charge and cantered through the night, while we slept soundly below.  If we wandered a few miles to port during one day we would wander back the next.

It was a little bit weird to go below after taking a last look round in the dark, and to know that old Content would be the only one awake, and to hear the rush of water past her planks.  In the morning we came blearily on deck to find the compass course unchanged, and slipped back into our bunks again.  So for a while we became passengers on our own ship, with time to savour to the full this trade wind sailing.

In many ways it was a perfect existence.  We had the blessing of unchanging good weather.  Day after day the wind rustled up from astern and lifted our sails for the sun to bleach.  Day after day the sapphire sea dimpled playfully round our hull or spluttered pretentiously past us on its way.  Day after day again, we saw the soft whiteness of the clouds and the sudden crimson of dawn and evening sun.  At night we could sleep on deck beneath the arch of the sails in the moonlight, or share the solitude of the stars when the moon had gone.  We could not ask for more.