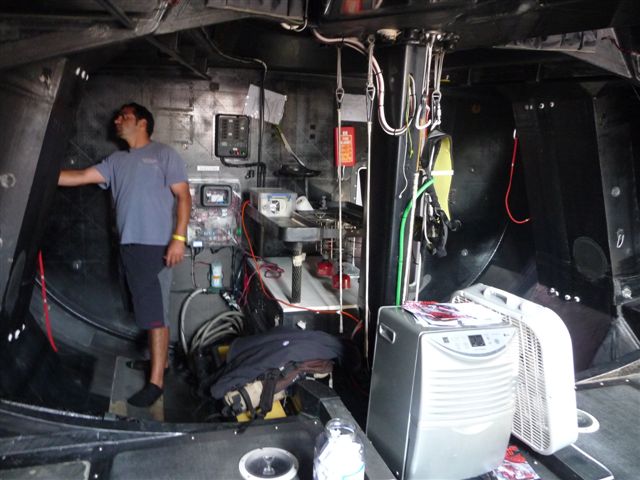 Speaking of Volvo Open 70s, another thing I got to see at the Newport show was the inside of one.

I went down to Boston in May when the whole Volvo Ocean Race fleet was in town, and even though I had press credentials… even though I was crewing on a race marshal’s boat, setting buoys and chasing riff-raff off the in-harbor race course (hats off to Scott Alexander at Selden Mast on that one)… no one would let me have even a teensy-tiny peek down below into the innards of any of the competing vessels. Interior accoutrements were strictly verboten, hush-hush, access only on a need-to-know basis.

But at Newport anyone who paid the price of admission could waltz around the interior of the VO70 Puma and get a feel for what it’s like to race around the world in one of these monsters. The ambiance is very, shall we say, BLACK and minimalist. The entire of crew of 15 is fed off a single-burner stove that makes an Easy Bake oven look like high technology; the one sink on the boat is the size of a coffee cup; the head is totally open, located in the cavernous forepeak; the bunks look about as inviting as slabs in a carbon-fiber morgue.

The most unnerving thing is the hull’s uncanny ability to amplify noise. Just sitting on a dock in Newport harbor, the hull’s interior resounded ominously like the inside of a vast drum every time a boat wake slapped against it. The motion, too, was quick, quirky, and very disconcerting.

There were some crew who had sailed the race hanging around, and I queried them about this. Going 30 knots in rough water, I suggested, must be truly hellish when you’re down below.

“You get used to all the noise,” one of them told me. “What’s scary is when it suddenly goes quiet. That means you’re airborne, falling off a really big wave.”

“But it must be depressing, too,” I urged. “It’s so black and gloomy down there.”

“Well, yes. You try to spend as much time on deck as possible.”

Another helpful soul explained there would be a new class rule in the next race dictating that all boat interiors be painted bright colors. This would make it possible to shoot better video down below and enhance sponsor value.

“We’d never do anything like that unless we were forced to,” he explained. “The paint will add at least 6 kilos to the weight of the boat.”