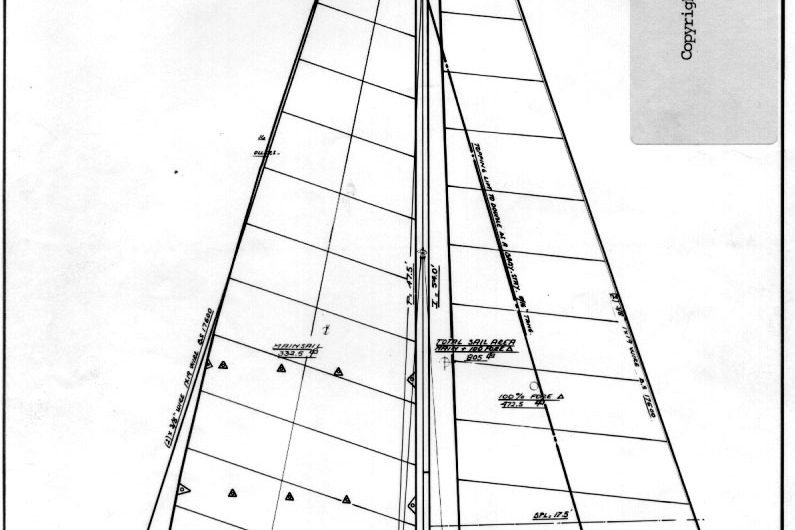 My current floating home of choice is a one-off aluminum cutter I purchased in the summer of 2006 from an active cruising couple, Bob and Carol Petterson, who commissioned the boat’s construction and launched her in 1985 .  They cruised her extensively on the U.S. East Coast and in the Bahamas and also completed a circumnavigation.  The bare hull was built by Kingston Aluminum Yachts in Ontario, Canada, and was finished in Rhode Island.  The design is by Yves-Marie Tanton, a French emigrant who slaved with Bob Perry and Chuck Paine in Dick Carter’s office in Boston during the ‘70s before making a name for himself designing several successful custom IOR race boats.

The boat’s hull form is lifted from an earlier 37-foot Tanton design that features a simple cat-ketch rig with freestanding masts.  Lunacy’s hull, however, has a two-foot scoop tacked on to her transom.  Though a number of the cat-ketches, dubbed “ocean-going Volkswagens” by Tanton, were built by Kingston Aluminum, Star Cruiser, as she was originally known, was the only cutter-rigged boat built.

Lunacy is typical of the many metal cruising boats that have been custom-built on the cheap to stock designs (primarily in Europe, but also to a lesser extent in the U.S.) since the 1970s.  To simplify construction the boat’s hull is hard-chined (it is in fact triple-chined, though it seems double-chined, as the bottom chine is quite soft) and her deck is flush, save for a small cabin house just in front of the cockpit. 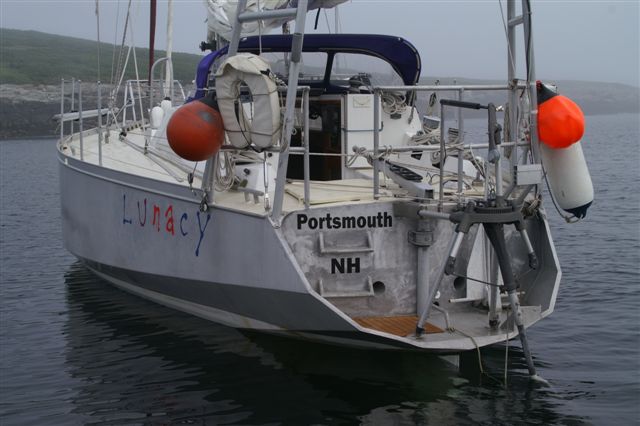 Construction is also robust.  The hull skin is supported by T-shaped frames on 18-inch centers and is comprised of 5-mm plate down low, shifting to 4-mm plate in the topsides; the deck is also 4-mm plate.  All of the structure above the waterline is insulated with blown foam.  The topsides are unfinished, and the deck is painted white.  Aside from keeping the deck paint up, there is no exterior cosmetic maintenance.  Already during my tenure as owner the boat has also survived a serious collision, suffering only a very small dent in her toerail.  A fiberglass boat, I am sure, would have been severely damaged in similar circumstances.

Lunacy’s hull form is reminiscent of older IOR designs in that she is quite beamy amidships with a pinched stern.  Her underwater profile features a well-shaped long fin keel and a transom-hung rudder (turned with a tiller) mounted on a full-length high-aspect skeg.  Because the boat is aluminum rather than steel, her displacement is moderate.  The ballast is internal lead, encapsulated and insulated within the keel.

The boat’s rig is quite tall (62 feet from waterline to masthead) with a rather small high-aspect mainsail and a rather large foretriangle.  The advantage of the large foretriangle is that even in moderate conditions the boat sails very well with a non-overlapping jib that is easily pulled around the inner forestay when tacking.  The disadvantage of the small mainsail is that sailing under main alone is often out of the question, which sometimes makes it more difficult to maneuver under sail in close quarters.

One of Lunacy’s greatest virtues, I’ve learned, is that she is very stiff, thanks primarily to her hard-chined hull, and has a very smooth motion in a seaway.  She does not pound much beating into a steep chop and is renowned at the yard where I keep her in Portland, Maine, for riding out fall nor’easters on her mooring without pitching or straining too much at her pennant.  Her chainplates are well inboard so she is reasonably closewinded and can sail with the apparent wind well inside 45 degrees in flat water without scrubbing speed.  She is also reasonably fast on all points of sail and is more easily driven than I expected.  Her helm, however, does load up when she is driven hard, hence there is a tendency to reduce sail sooner than necessary once the wind starts building. It would be easier to sail the boat to its best potential if it had a wheel rather a tiller.  Unfortunately, the cockpit is very small and retrofitting a wheel is out of the question.

Because her cockpit is so tight, Lunacy is easy to manage singlehanded.  All sheets and control lines, with the exception of the traveler controls, which are forward of the dodger, are just a short reach from the helm.  But with more than two people in it the cockpit does feel overcrowded when there is serious work to be done.  Fortunately, the boat’s flush deck and stiff ride normally make it easy for idle crew and guests to hang out forward of the cabin house.

The accomodation plan is straightforward and works very well.  The center of the boat, housing the saloon, galley, and nav station, feels enormous, thanks to the beamy midship sections.  In spite of the flush deck, there is standing headroom to about 6’2”.  Up forward there’s a Pullman double berth in the owner’s cabin, plus there’s another smaller double aft in a segregated alcove under the cockpit to port.  The straight settees in the saloon, either side of the fixed centerline table with folding leaves, are the best berths in a seaway, as the motion in the middle of the boat is smooth and noise from the cockpit is not intrusive, as it tends to be in the aft berth.

In sailing Lunacy to New Hampshire from Florida where I purchased her I found her to be the most comfortable boat under 40 feet I have ever slept aboard while at sea.  Ventilation is also very good.  There are seven large Dorade vents to pump air below when things are wet and wild outside, plus five deck hatches that can be popped open when conditions are calm.

Specs and performance ratios as follows: