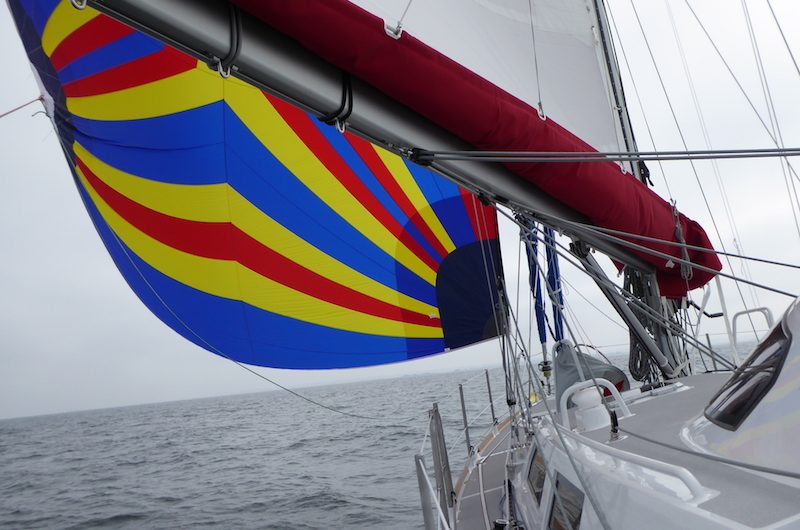 In fact I have been in Treguier here in France for a week now, grappling with the project of getting to know the new Lunacy while simultaneously studying printer’s proofs for the new book. The book now has been irretrievably committed to the press, and just yesterday Jean-Francois Eeman of Boreal Yachts joined me for a maiden sail on Lunacy. We had a broad range of wind to work in, from 8 to 25 knots apparent at various angles, and exercised all the sails, including the spinnaker, which has, as you can see, quite the modest color scheme.

Having never done this before, taken delivery of a brand new boat, I have felt alternatively daunted and elated by the process. 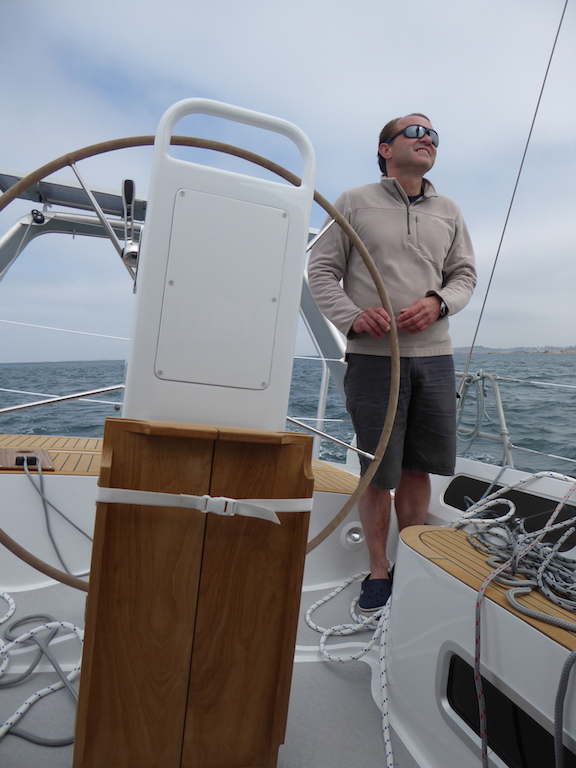 Jean-Francois Eeman takes a turn at the helm during yesterday’s test sail. We’ve been discussing the boat now for a year in a convoluted series of very long e-mail chains and amazingly he has not forgotten any of the things I asked for 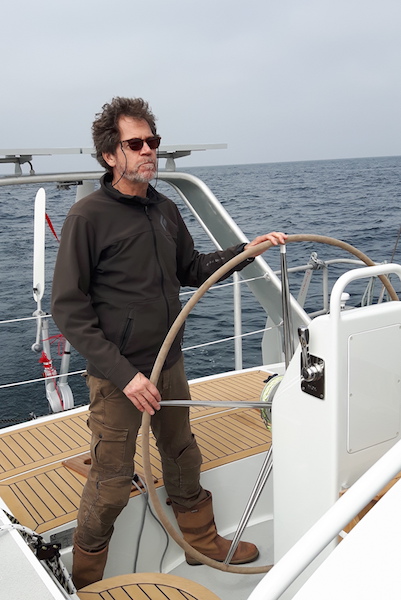 Our hero tries her out 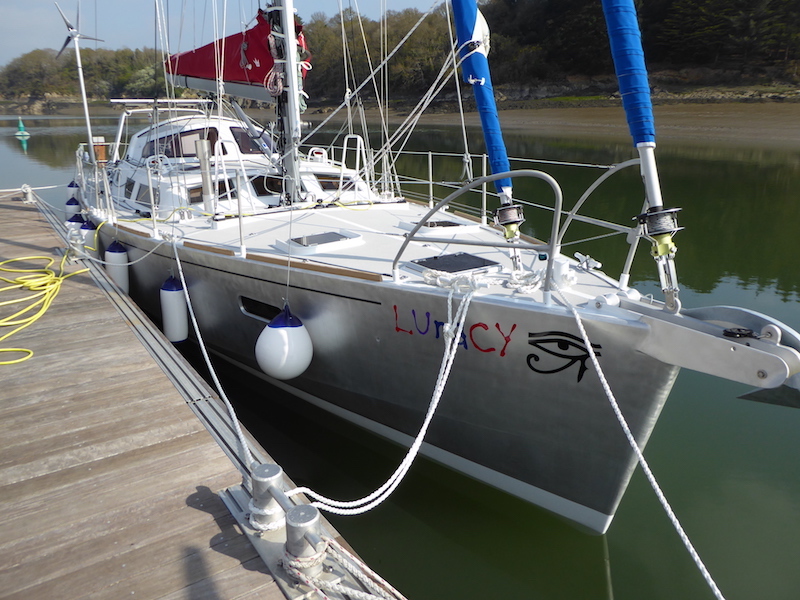 Here she is lying on a pontoon in the marina on the river at Treguier. They have big 30-foot tides here and lots of current! 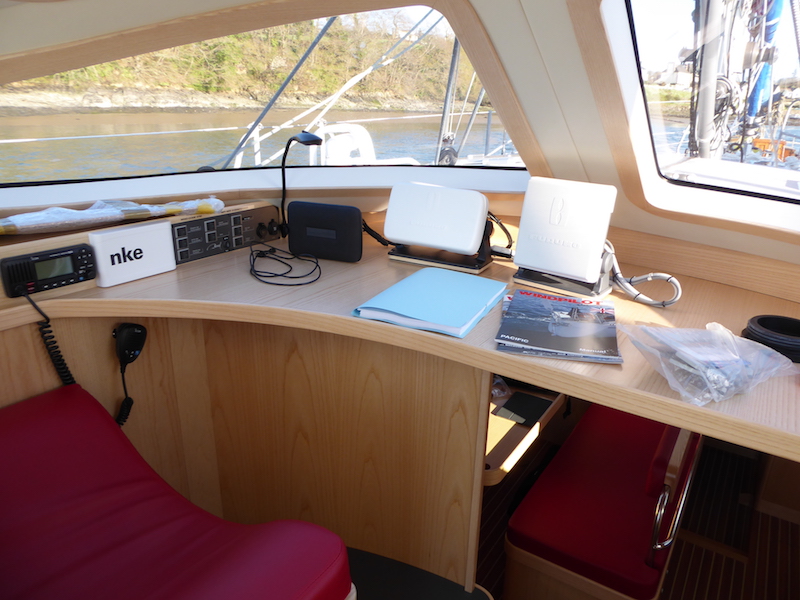 Lying on the pontoon from behind 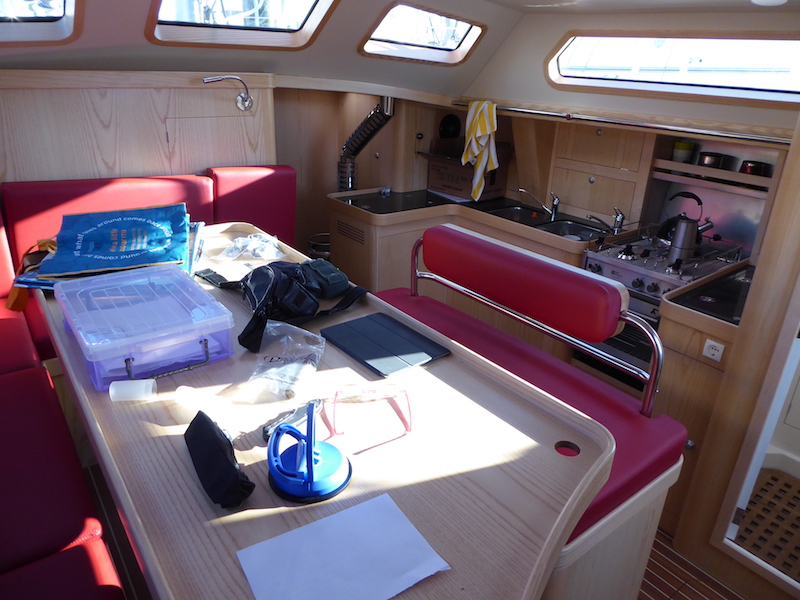 The saloon and galley, unposed. The saloon, with windows you can see out, is a fantastic improvement over old Lunacy. But the galley on old Lunacy had much better storage. The best way to really improve galley storage on the new boat, near as I can see, would be to leave out the heater (you can see its chimney in the corner there) and use the space for a pantry. But I like the heater and have been firing it up every morning so far to beat back the chill morning air 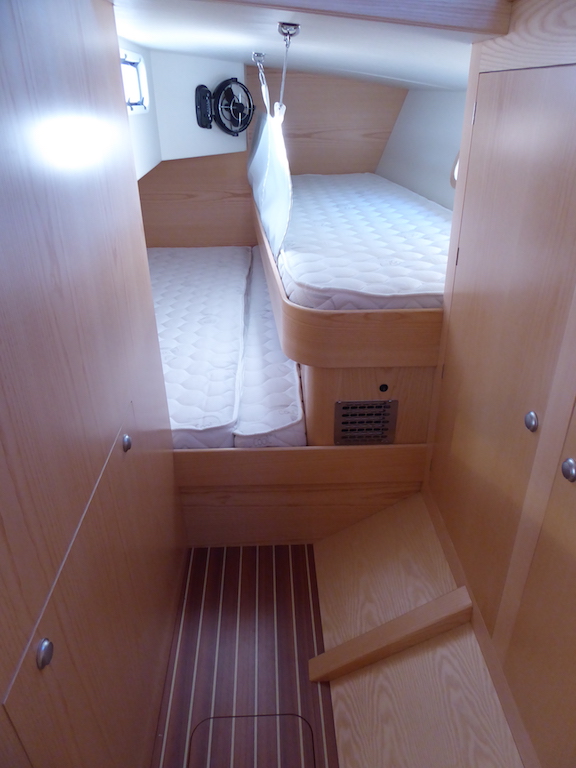 Aft stateroom! Note the upper berth has a nice window right next to it (not entirely visible, but you can see the corner of it and the light from it). There’s one of the other side of the boat just like it. This way both daughters (Lucy and Una, after whom the boat is named) can cruise with a friend 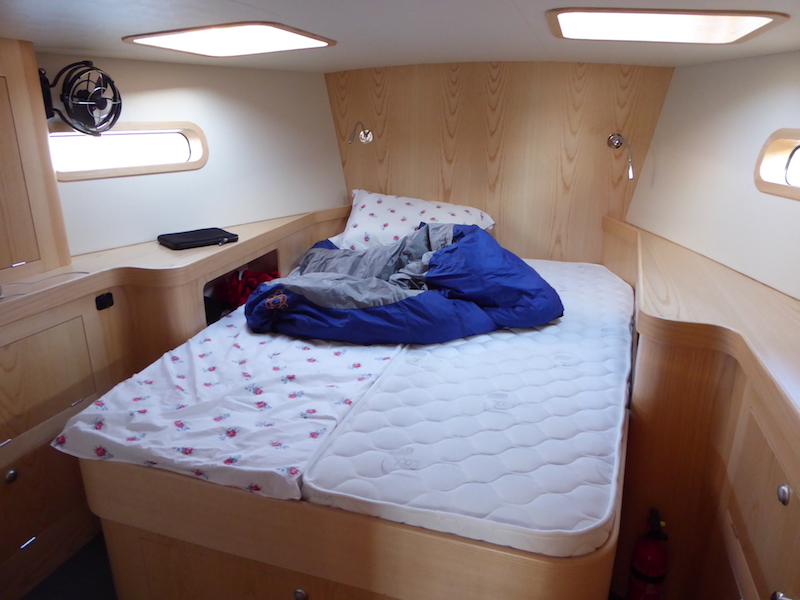 Forward stateroom where Moms and Dads sleep. You can split this berth in two with a leeboard for sleeping while heeling; also for preventing the advent of future daughters 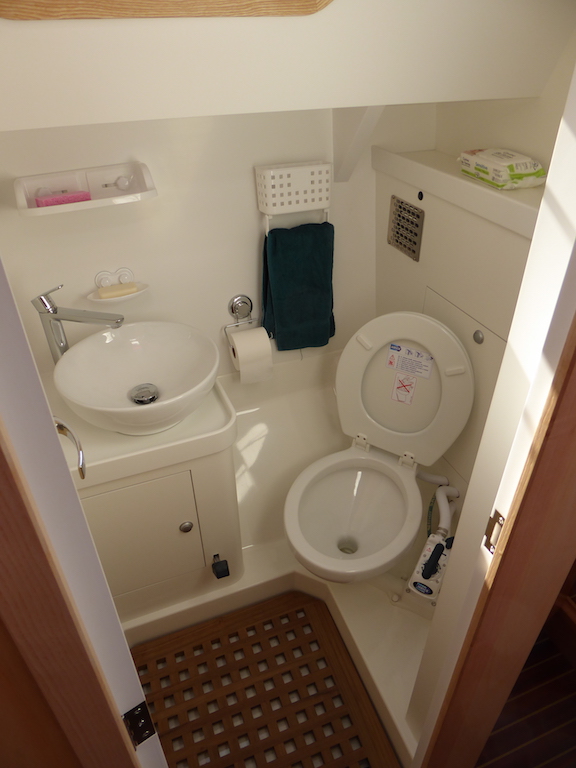 The only head on this boat is aft. The standard lay-out calls for two heads with toilets, but I asked for just one. How much time, after all, do you really spend sitting on a toilet??? 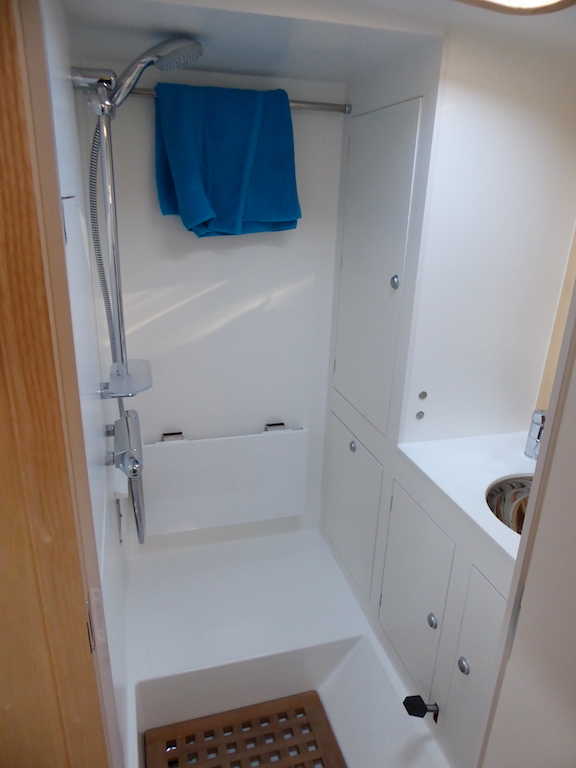 The forward head has been made over into a dedicated washing-up and shower space. I’ve tried the shower; it works great! 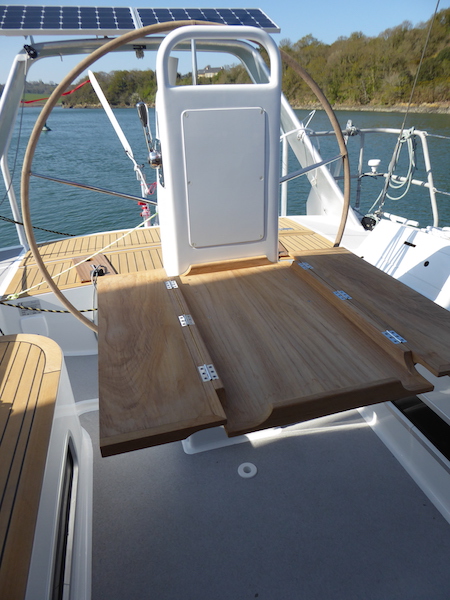 Oh my God! There’s a table in the cockpit! Never had one of those on a boat before (at least not one I’ve owned) 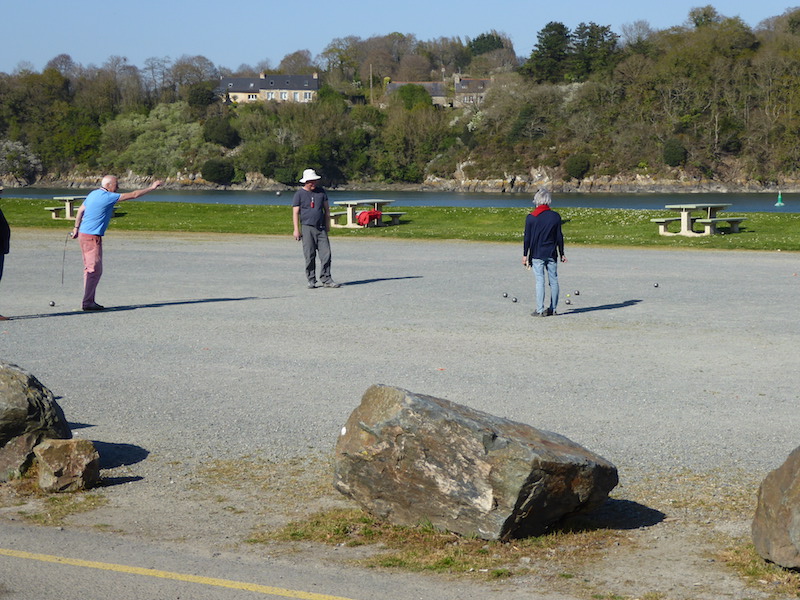 How you know you’re in France is that old people come down and play bocce ball (or boules, I think they call it here) by the river every evening 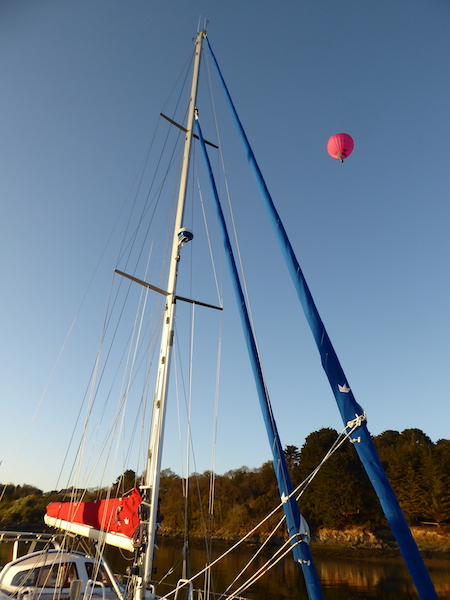 A few days ago a big pink hot-air balloon went sailing by in the early evening! 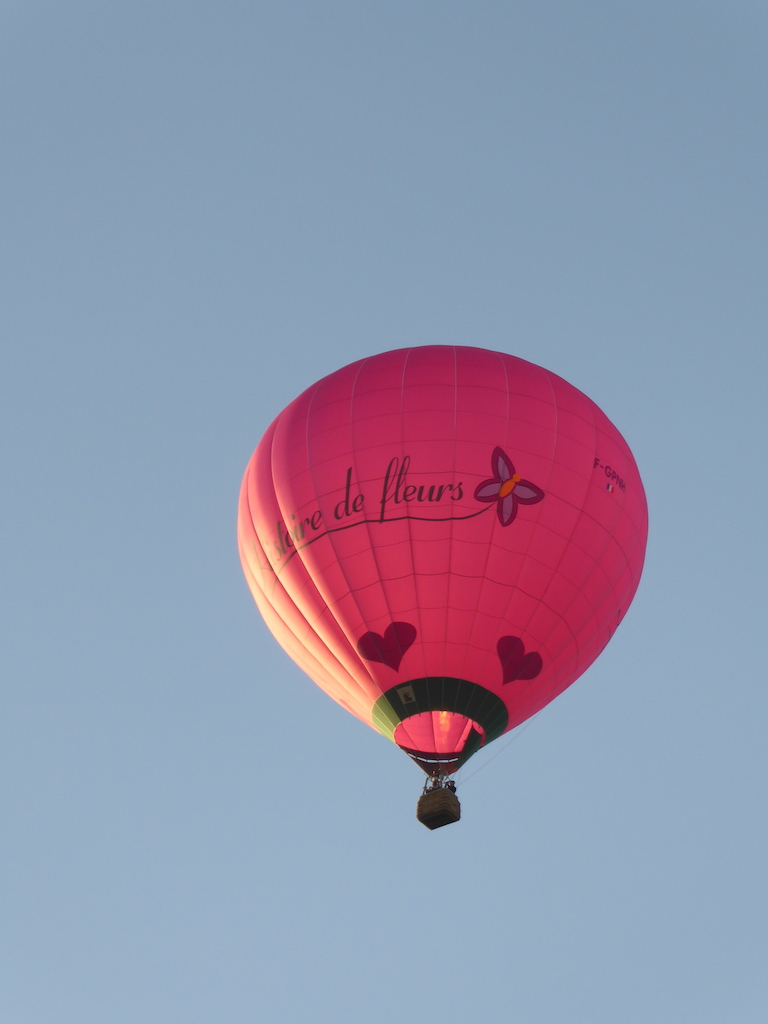 Close-up of the hot-air balloon, complete with flame for making hot air. I translate the name of the balloon as Flower Story 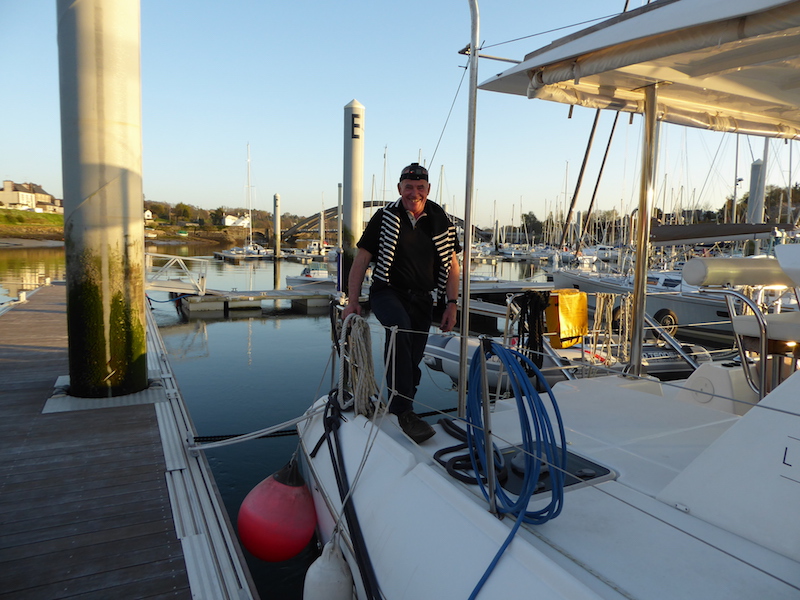 My pontoon neighbor Serge, who lives on a Lagoon catamaran called Planet Migo. He’s been showing me new ways to drink rum. He’s spent the last three winters here, but not the next one. He is sailing to the Canaries in August

I’ll have been here a total of about three weeks before we finally take off for the U.S. at the end of this month. I shipped over five big boxes of boat gear ahead of me and have been slowly unpacking these and moving stuff on to the boat as I explore its nooks and crannies. What with that, and studying and testing the new systems, and getting in more test sails, it’s very nice to have some time in hand. Check back later for a progress report!