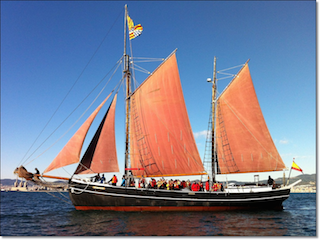 Sorry the blog’s been dark so long! But I do have an excuse. I’m in France right now, having come by way of Ireland (where I was visiting family for Easter) and Barcelona and then Andorra, where I stopped in for a few days to visit Clare and Edward Allcard, the well-known liveaboard cruiser-authors who wandered far wide for many years on an old 90-ton Baltic ketch named Johanne Regina (see Clare’s books A Gypsy Life and The Intricate Art of Living Afloat). Johanne has since been adopted by a Catalonian non-profit group, has been rechristened Ciutat Badalona (after the Catalonian municipality of the same name), and is now flawlessly maintained (see photo up top).

But it wasn’t always so. If you’ve ever read A Gypsy Life, you’ll recall that the Allcards’ two decades of ownership of Johanne was an unrelenting maintenance nightmare and the boat was never really ever close to being “finished.” Coincidentally, during my visit they were also visited by British sailing author and TV personality (and erstwhile SAIL contributor) Tom Cunliffe, his wife Ros, and his old mate John Lovell, who had come to share some even grimmer tales of Johanne’s pre-Allcard days.

It just so happens that Johanne was the boat that led Tom Cunliffe into his life as a roaming sailor. He had given up studying the law and was driving trucks to make ends meet when in late 1965 he answered an ad, full of hope, and joined the crew of Johanne, which then was totally derelict and lying in the mud of the River Hamble in England. Over the course of three cold winter months, Tom and six other characters–including John Lovell, the acting first mate; a difficult owner; an ex-Royal Navy man named Bob who had a gambling problem and was on the run from an Aussie mobster called Joe Bananas; plus one Peter, who couldn’t afford shoes and instead wore plastic bags and socks on his feet–worked feverishly to rehabilitate the boat before sailing it south.

Tom had collected some old photos and had prepared a special presentation of his tale, which he was scheduled to deliver to the folks in Badalona who now own and operate the boat. But first he wanted to try it out on the Allcards, whom he had never met before. 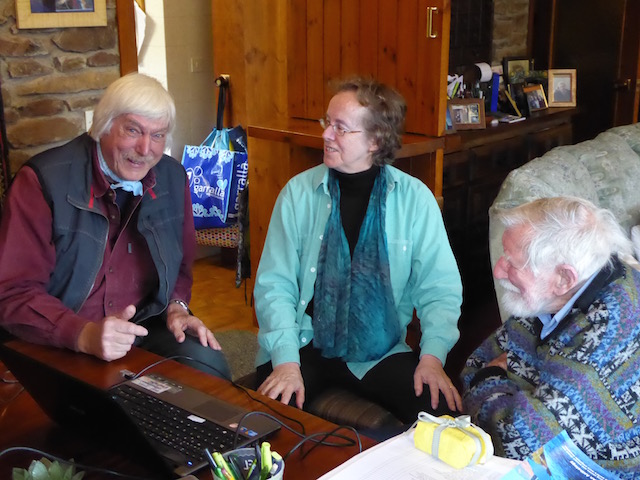 One nice highlight featured the installation of Johanne’s ballast, which consisted of iron pigs pilfered from a nearby wreck. After the crew slaved with chisels and hammers to chip the pigs into the proper shapes and sizes, they were hastily set in concrete in the old ketch’s bilge on New Year’s Eve. Clare became quite demonstrative on hearing about this, as she spent many hours about a decade later laboring to chip all that concrete out again.

Another great highlight: it was during this time that Tom first met his wife-to-be Roz, who was brought to the boat by Shoeless Peter in mid-refit after he encountered her and a girlfriend in a nearby pub. 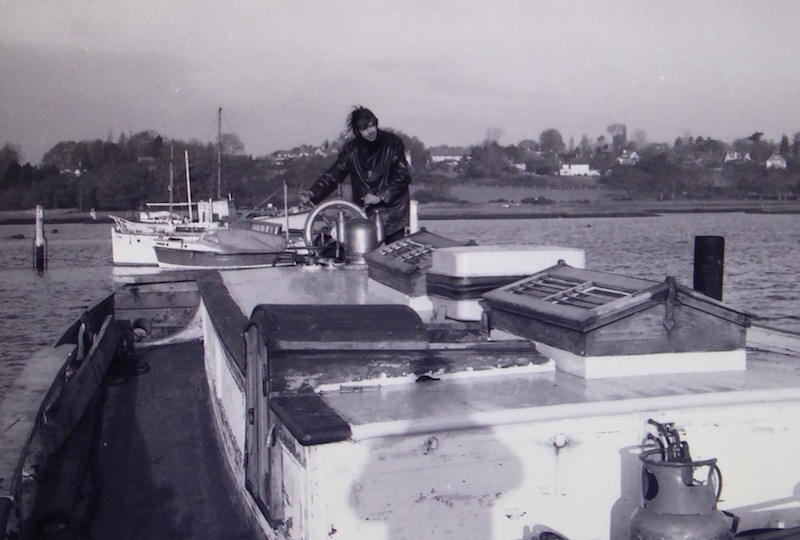 Johanne in the early-stages of her refit, sans rig 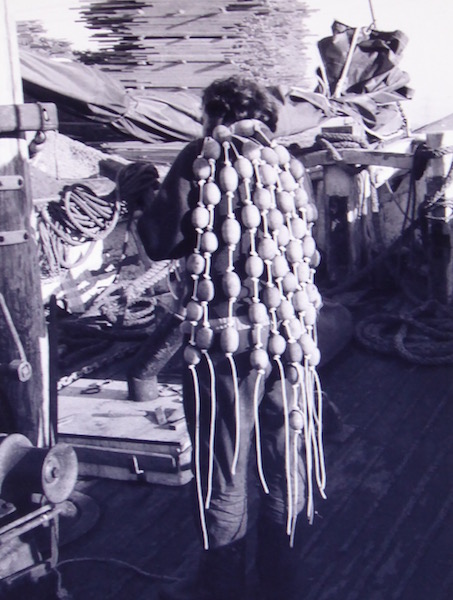 Getting set to install parrels on the gaff sails 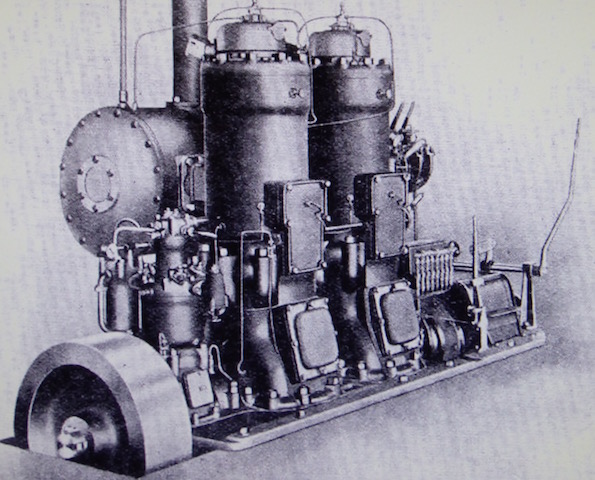 When Cunliffe and company worked on her Johanne was equipped with an ancient two-cylinder Volund engine similar to this one. By the time the Allcards got their hands on her she had a GM diesel. The Volund was started with compressed air. If all went well the engine compressed air for its next start while running. If it didn’t, the air had to be compressed with a manual pump, which as Tom tells it was a most onerous chore indeed 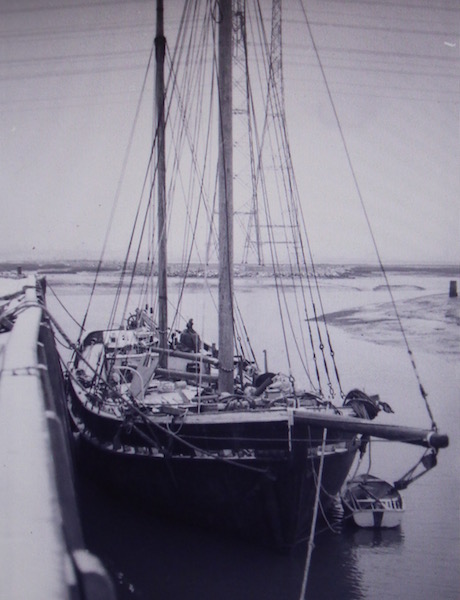 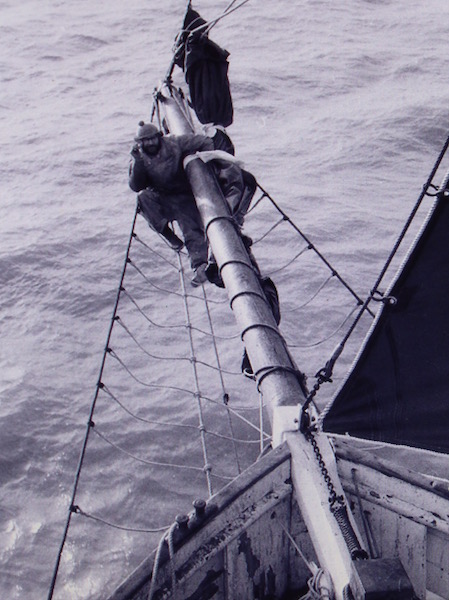 Crossing the Bay of Biscay. Inevitably a fierce gale was encountered and Johanne started taking on large amounts of water. This was blocked from reaching the bilge pumps by the ballast-encapsulating concrete, portions of which had to be removed forcibly with pick-axes in mid-gale 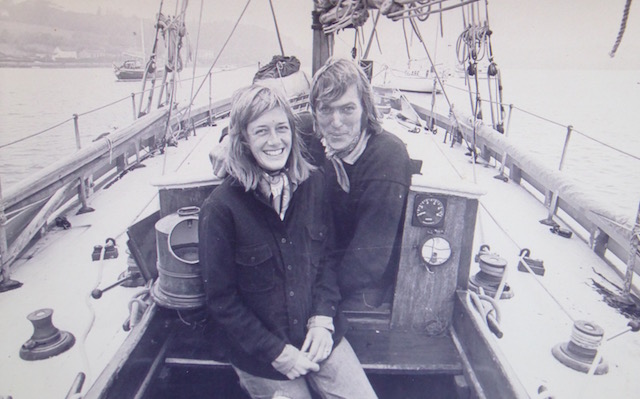 A fairytale ending. Tom jumped ship in Madeira and ran off to rejoin Ros, and they eventually acquired their own antique craft (a 32-foot Colin Archer pilot cutter, Saari, seen here) aboard which they began their own series of adventures. John Lovell meanwhile stayed aboard Johanne and saw her safely over to the West Indies, where she was eventually found by the Allcards

Yet another highlight, which I feel I must include, as Tom referenced it at least three times during the one evening and morning I spent with him. That difficult owner, who apparently kept his crew on tight rations of gruel and one Mars bar a week. Eventually Gambler Bob (who each week partitioned his Mars bar into seven daily portions) tried to brain him with an anchor, but Tom saved Bob from completing this mutinous act by hitting him hard in the back of the knees and knocking him down. 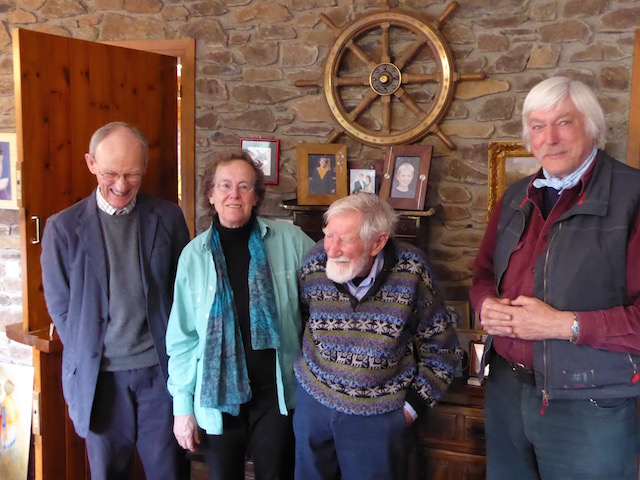 Two separate iterations of Johanne’s crew, joined together at last under her old wheel (hanging on the wall there), from left to right: John Lovell, Clare Allcard, Edward Allcard, Tom Cunliffe 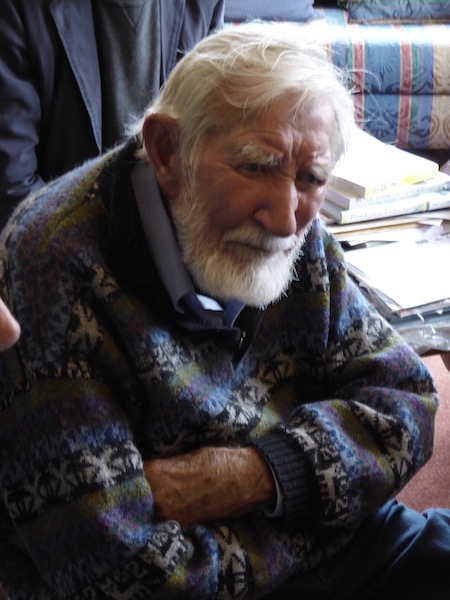 Edward, who ultimately was the catalyst that brought us all together (in the larger cosmic sense at least), is now 101 years old! And he’s got a postcard from the Queen to prove it 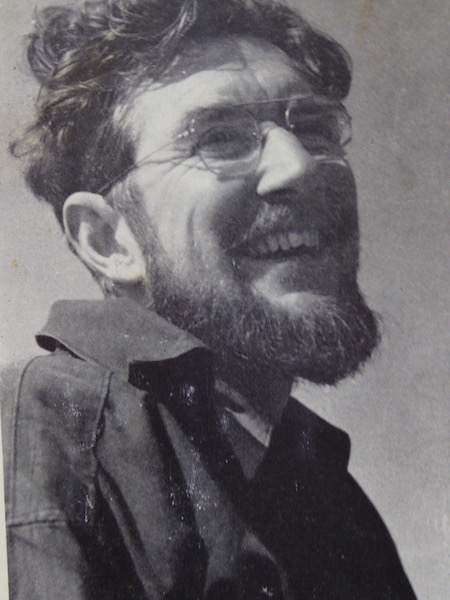 Edward in his prime circa 1958. He was one of a few sailors who embarked on significant singlehanded voyages in the immediate post-war period. The books he wrote recounting his early adventures are: Single-Handed Passage, Temptress Returns, and Voyage Alone. Clare is currently preparing his last book, which tells of his doubling Cape Horn, for publication

BONUS VIDEO! Here’s a nice one of Johanna sailing as Ciutat Badalona: 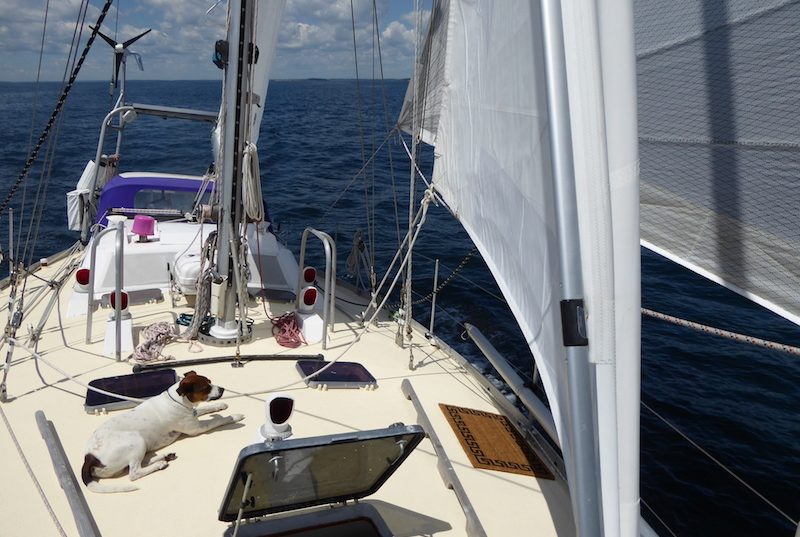 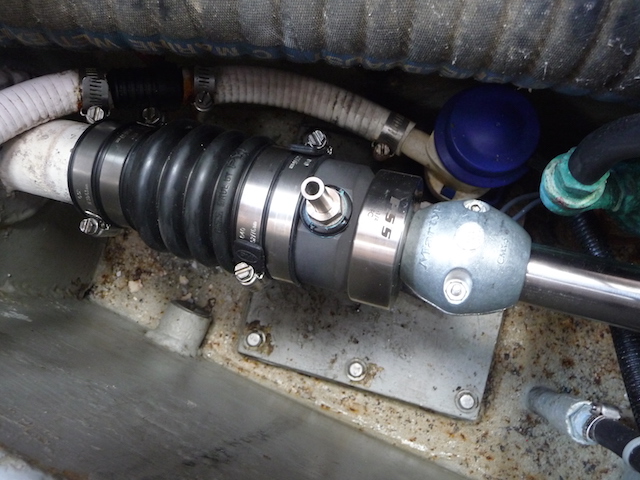