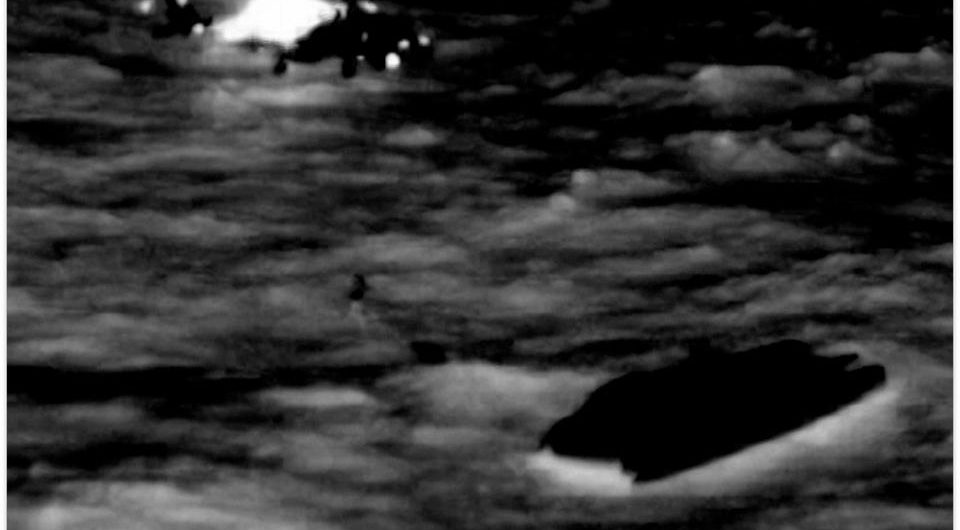 For me this is like déjà vu all over again. All this month I’ve been thinking about where I was a year ago, dangling from a wire beneath a Coast Guard helicopter many miles offshore with a busted catamaran beneath me. This year’s victim, unfortunately, is an award-winning Gunboat 55, hull no. 1, Rainmaker, which got dismasted yesterday after getting raked by a 70-knot whiteout squall about 200 miles southeast of Cape Hatteras. The five-member crew elected to abandon the vessel and was evacuated by a Coast Guard MH-60 Jayhawk helicopter operating near the limit of its range.

Gunboat CEO Peter Johnstone broke the story late yesterday on his Facebook page and described the incident to me in more detail early this afternoon.

Rainmaker was 36 hours into a passage that began at Gunboat’s North Carolina yard, bound for St. Martin, when she was dismasted. Sustained winds at the time were 30-35 knots, with 40-knot squalls coming through at intervals. The crew, led by skipper Chris Bailet and owner Brian Cohen, were flying a triple-reefed mainsail and a storm jib. Also aboard were Cohen’s son and two other professional crew. The coup-de-grace was delivered by one 70-knot squall, a microburst Johnstone termed it, that looked no different from the other squalls as it approached. In Johnstone’s words: “The mast came down with the wall of wind.”

According to Johnstone, the rig was cleared with no damage to the hull, and the crew salvaged the storm jib in hopes of putting up a jury rig later. There were lines around the props, which precluded any motoring until they could be cleared. “No question, they probably could have turned downwind and tried to sort something out later,” Johnstone told me. “But the weather forecast was bad, and in the end they decided to play it safe with the lives aboard.”

According to the Coast Guard’s report, a 350-foot cargo vessel, Ocean Crescent, was 40 miles from the scene and diverted to pick up the crew, but was unable to come alongside the catamaran. According to Johnstone, Rainmaker collided violently with the ship and was almost sucked into its propeller. Ultimately, the crew was lifted off at approximately 5 pm by a Coast Guard Jayhawk helicopter sent from the Coast Guard airbase at Elizabeth City, North Carolina. The Jayhawk reportedly didn’t have enough fuel to make it back to Elizabeth City and instead landed in Manteo, North Carolina, not too far from the Gunboat yard, at 8:10 pm.

Here’s a viddy of the lift that the Coasties have posted:

Conditions look quite a bit rougher than they were when I got to appear in one of these productions last year.

I am sure a lot of people out there are already in Armchair Admiral Mode, doing the would-have should-have could-have thing, second-guessing the crew’s decision to abandon ship, but I can tell you from experience this is a definitely-have-to-be-there sort of decision. I met the skipper, Chris Bailet, when I was aboard Rainmaker at the Newport show last fall and was very impressed with him. I’m guessing he very likely might have organized a way to get the boat back to shore once the weather settled out, but there are other personal factors to consider. I’m thinking in particular of the owner, and that son of his. I’ve met many owners who are bolder than their skippers when it comes to a boat’s safety. But a child’s safety is something else entirely.

Johnstone has stated an effort will be made to retrieve the boat, which is valued at about $2.5 million. I imagine right now they’re pretty busy organizing that. 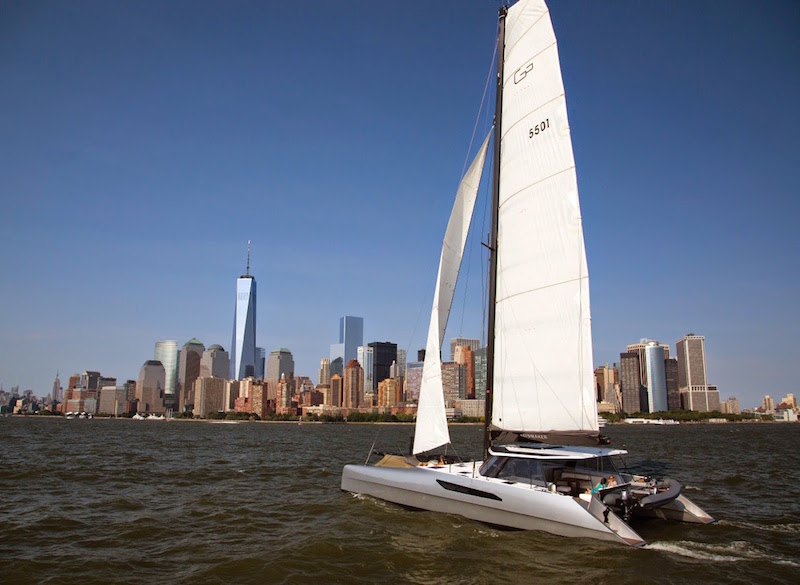 This is Rainmaker on her home turf, off Manhattan. Brian Cohen intended to use her as “a floating conference center” for a group of investors he leads during the summer season and spend winters aboard down in the Caribbean. You can read more about Cohen and the boat in this Forbes profile here, and can also catch them together in this viddy: 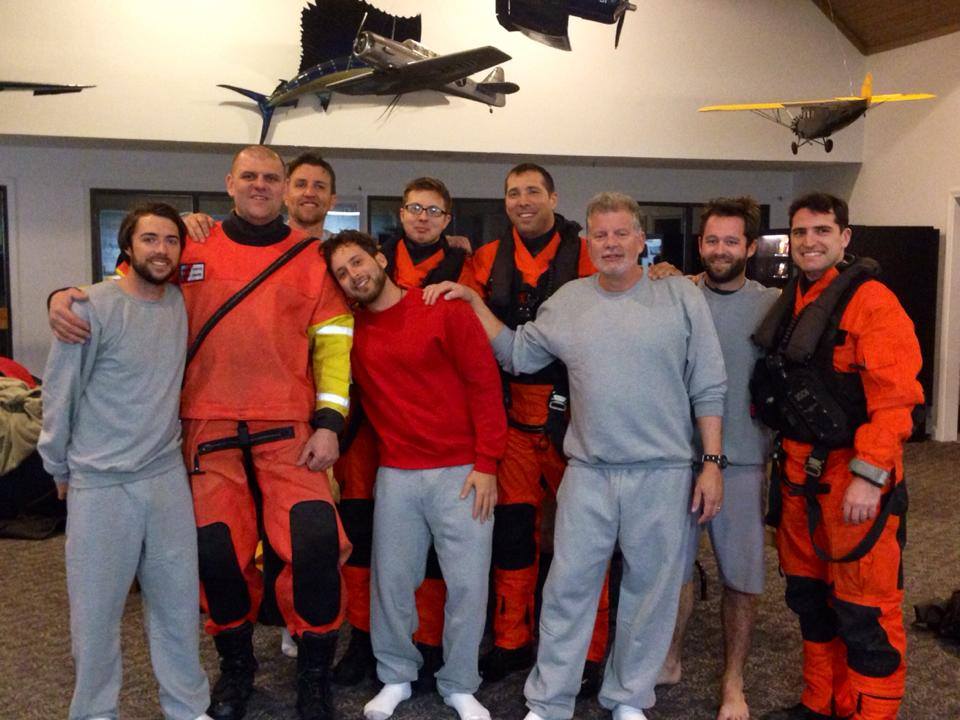 Rainmaker‘s crew with the Coasties that retrieved them, safe and sound in Carolina

One question I’m asking myself is about the ultimate range of these Coast Guard rescue helicopters. We were 300 miles offshore when we were rescued last year, and they refueled twice at sea on a U.S. Navy vessel while retrieving us, once coming out to us and once going back. When I asked about this, my Coasties told me the Jayhawk’s range is about 300 miles. Hence on a 600-mile round trip, plus spending a lot of time hovering while lifting people aboard, it obviously made sense to stop twice for gas.

Now here we have the same helo saving Rainmaker’s crew on a 400-mile round trip with no fuel stops and apparently just barely enough fuel aboard to pull it off.

According to Wikipedia, the Jayhawk “is designed to fly a crew of four up to 300 miles offshore, hoist up to 6 additional people on board while remaining on scene for up to 45 minutes and return to base while maintaining an adequate fuel reserve.”

Anyone got hard facts on this?

UPDATE (Feb. 27): Sailing Anarchy has managed to debrief skipper Chris Bailet and has published a much more detailed account of what happened in two installments: Part 1 and Part 2

These are well worth studying and conflict in some particulars with the secondhand account I received from Peter Johnstone immediately after the incident. The Reader’s Digest condensed version: things seem to have been considerably dicier than first described. The port side window was smashed as the rig came down leaving broken glass everywhere, the port side companionway was compromised and couldn’t be secured, the port side propeller had a line wrapped around it, the starboard engine was not starting properly, the electronics were all out, the owner and his son seemed to be in shock, the central bowsprit (or longeron) forward was not secure, and some seriously bad weather was coming up soon.

Bailet’s description of the attempt to rendezvous with Ocean Crescent is particularly chilling:

The Ocean Crescent told us to hold course and they would come around our port side, around our transom, and to windward, along the starboard hull. As they were in final approached, they radioed that they would be crossing in front of our bow, then stopping to windward of us. At this time we were going approximately 2-4kts down the waves, no engines (STBD kept cutting out) with our starboard quarter to the wind. The Ocean Crescent made this call while they were within approximately 900ft (3 of their boat lengths) of our bow, approaching at about 10 knots. As they got close, they made an emergency turn to port to try to avoid collision. As soon as it became obvious they were going to hit us, I try a handful of times to get starboard engine on, finally it caught and I threw it into reverse. The starboard side started to turn, exposing our port bow and longeron to the ship, and they collided with our port bow forward of their midships. It was a big blow, and we heard the crunching of the carbon (really getting sick of that sound now), though we didn’t know how much damage we’d sustained as we rolled off their bow wake and slid down their starboard side. But OC was still turning to port, and as we neared their transom, the tanker went bow down on a wave, completely exposing their massive spinning propeller. It missed our port hull by a few feet.

Meanwhile, the owners of Ocean Crescent have published their version of events here and released photos of Rainmaker, post dismasting, taken from the ship. 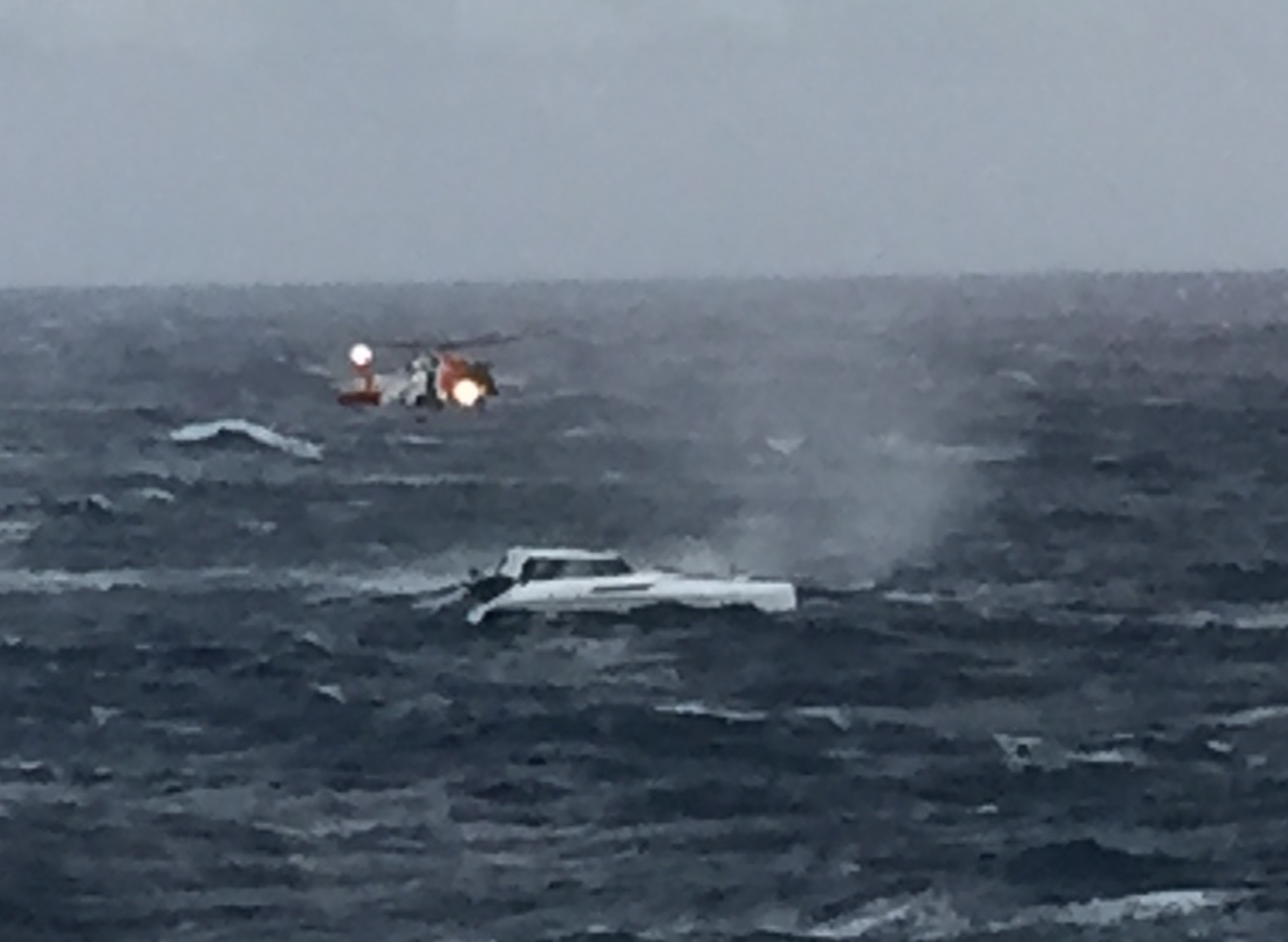 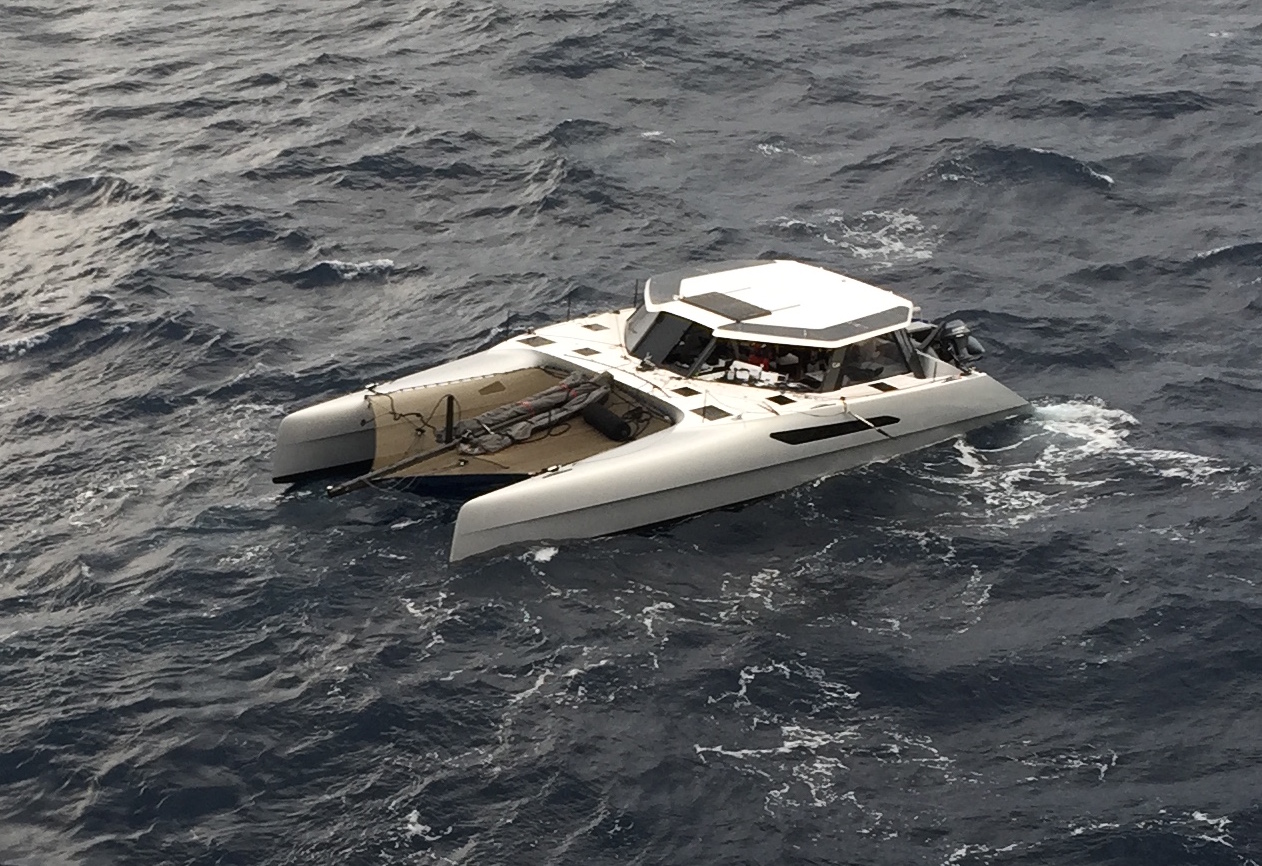 The latter photo was taken when Rainmaker was in the ship’s lee close aboard. Note the sagging longeron and the missing port side windows.

SA has a third post on this coming up, with info (so we’re told) on the salvage effort, and I’ll post a link to that when it appears.

ANOTHER UPDATE (March 2): As promised, here’s a link to SA’s final report: Part 3

The skinny on the salvage effort is that they evidently left an activated EPIRB onboard. (I’m a little surprised the Coast Guard was cool with that, as we were told in no uncertain terms to brings ours with us when we abandoned Be Good Too last year, although in this case the EPIRB had already been activated, and in ours the EPIRB was still a virgin.) In spite of this, they were unable to find the boat with either a search vessel or with planes before the signal cut out, though they did find some debris from the boat. Another interesting point is that SA’s Mr. Clean, in his final analysis, seems to state as fact that the dismasting occurred through a failure to release the mainsheet, though there is nothing about this in the interview with Bailet.