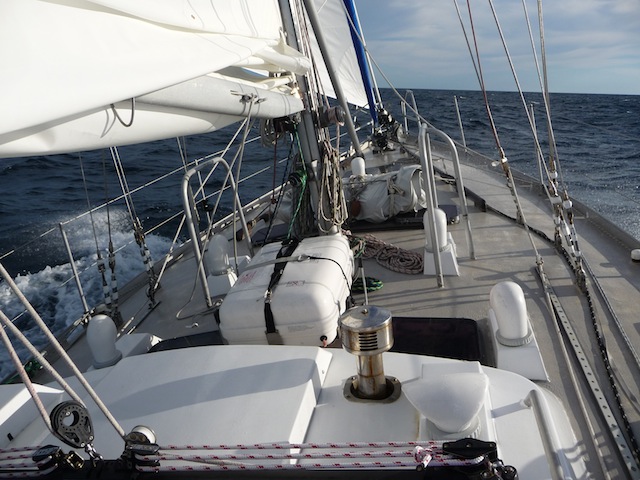 Perhaps you’ve noted a pattern here. And yes, looking at the forecast right now, it appears I will again be confronting mostly headwinds when we leave here for St. Maarten later in the week.

We all know the old adage: gentlemen never sail to weather. To which all I can say is: thank God, I’m not a gentleman. Otherwise I’d never get anywhere.

While gale-bound in Newport Richard and I had a chance to visit Newport Shipyard and gawk at the mega-yachts that live there. Afterwards we had a delightfully random encounter with Yves-Marie Tanton, the man who designed Lunacy and who came aboard for a brief inspection. 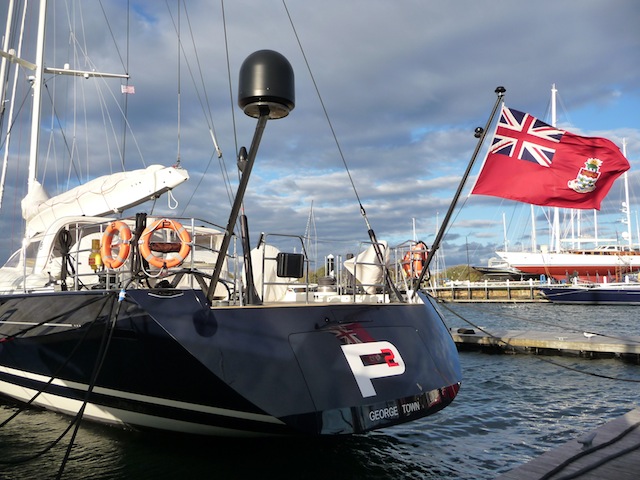 Transoms of the Gods 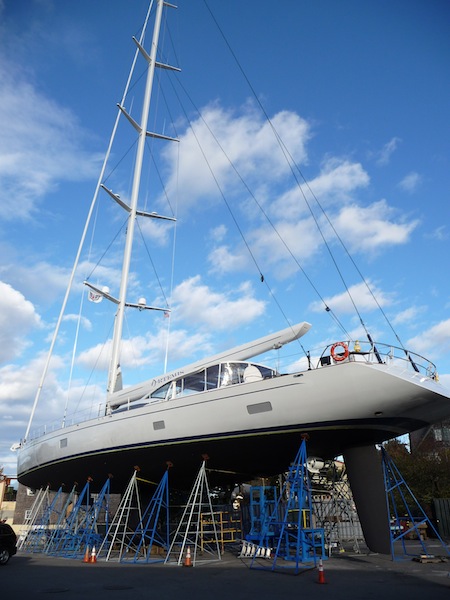 Jackstands the size of Christmas trees 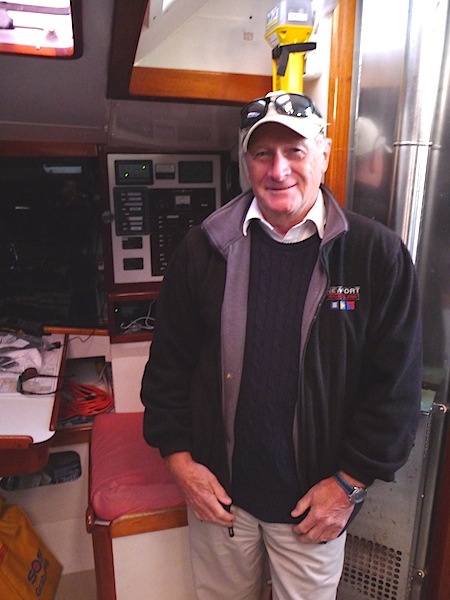 On leaving Newport the morning of Monday, October 27, the forecast I had from Ken McKinley of Locus Weather called for strong northwesterlies morphing into southwesterlies that would carry us on a reach most of the way to Bermuda before going southerly only on the last day or so. It seemed as ideal a scenario as one can reasonably hope for this time of year.

What happened in reality was that the northwesterlies on day one weren’t very strong and brought to us no fewer than five gale-swept shore birds, from Long Island presumably, two of whom spent some time in the cabin belowdecks, and one of whom spent the whole night sleeping peacefully atop one of the settee back cushions. 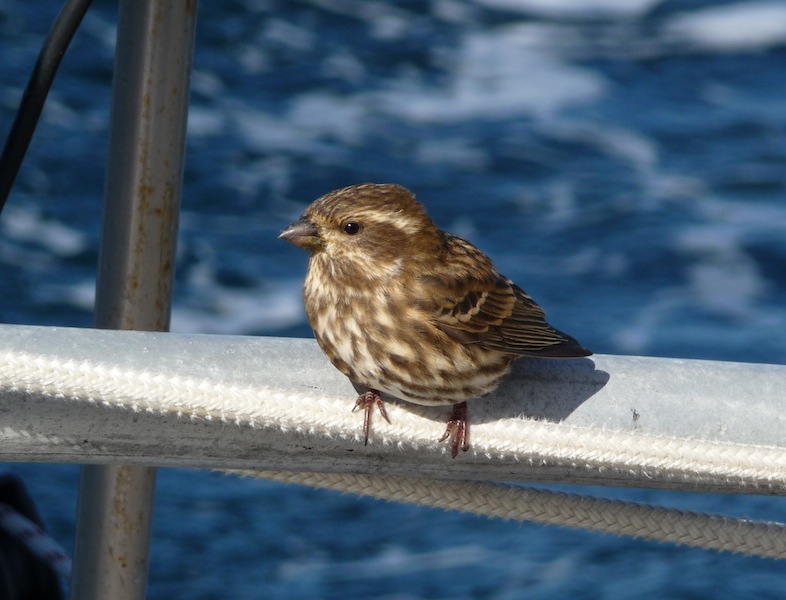 This is the one who spent the night. It pooped several times on its settee cushion, then flew off in the morning into the great void of sea and sky, where it must have died. Such is the fate of those who shit where they sleep

We never did see those southwesterlies. Instead the wind pretty much went straight south on Tuesday and stayed there, building to a fine crescendo on Thursday night, when a series of gnarly southerly squalls pumped the wind up to 35 knots for a while.

By then I was very tired. Constantly bracing yourself against the incessant heeling of the boat and the intermittent pitching and slamming concomitant with closehauled sailing in open water is a fantastic isometric exercise regimen, but after a few days of doing it 24/7 it does wear you down. Also, I had spent a good deal of time with my head in the bilge, dealing with an annoying technical problem. Once the wind went squirrely as the squalls came on, we started motorsailing so as to save us from constant sail changes and then we just kept on motorsailing so as to be sure of getting here before the impending gale. 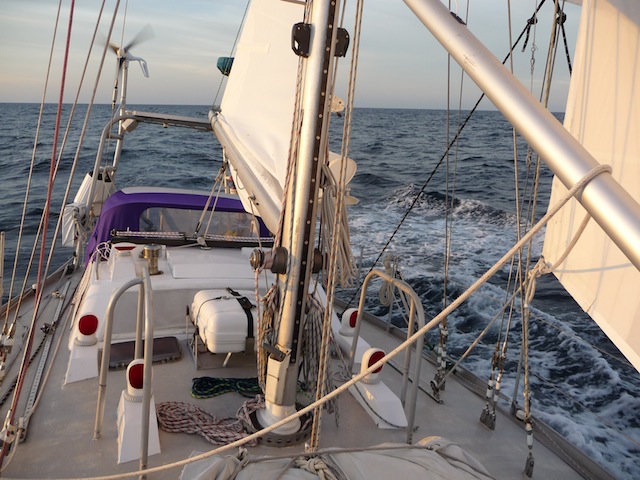 This was the real problem. I set up the whisker pole before leaving Newport, just in case we had to pole out a headsail to cope with those northwesterlies, and it jinxed us for sure 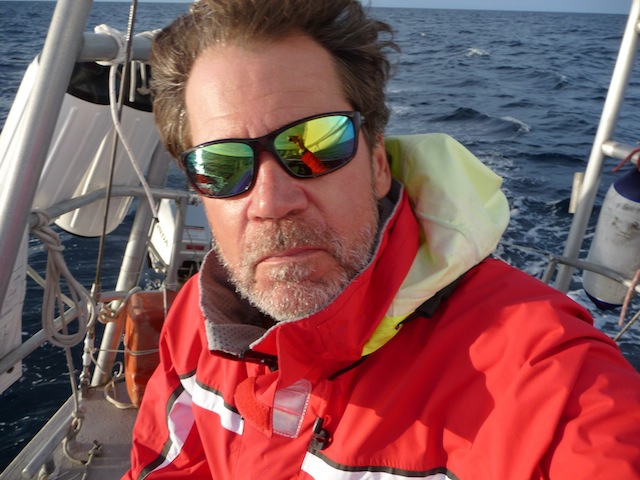 Self-revealed selfie. The eye in the hand of the eye that reflects it. And I’m looking not nearly so knackered as I feel 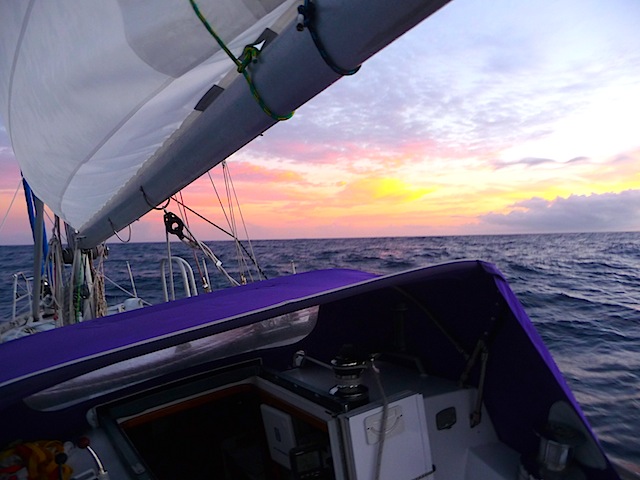 Sunrise on Saturday, as we at last approach Bermuda 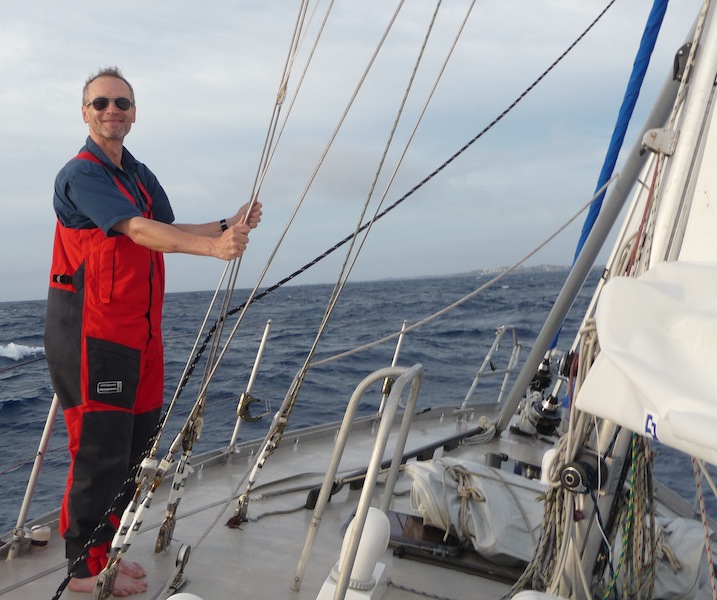 Richard on deck with Bermuda in sight

During our approach to St. George’s in the wee hours of Saturday we heard half of a drama unfolding on the radio. This happens often, where you can hear Bermuda Radio, which has a very strong VHF transmitter, talking to boats whose responses you cannot hear, because their transmitters aren’t nearly so strong. In this case Bermuda Radio was organizing both a tow and an ambulance for a vessel Adesso, obviously in distress.

Most telling was a question from Bermuda Radio: “Is your husband–I’m sorry, I mean the captain–is he in very serious pain?”

I assumed from this that Adesso‘s crew was a couple, a husband and wife gone off at last on their big adventure to the Caribbean, and that the husband had been hurt somehow, and the wife now had no idea how to manage the boat without him. But this is only an assumption, and I do not know the facts.

On arriving at St. George’s the effects of the recent hurricane were very apparent. Several roofs in town have been blown away, including that of the venerable White Horse Tavern. The foliage ashore is all messed up. The customs dock at Ordinance Island is shattered, so to clear in we had to land on the wall in the pilot boat’s berth instead. There are very few boats in the water, with missing local boats being most conspicuously absent. People still seem a little bit shell-shocked, though very grateful no lives were lost in the storm. 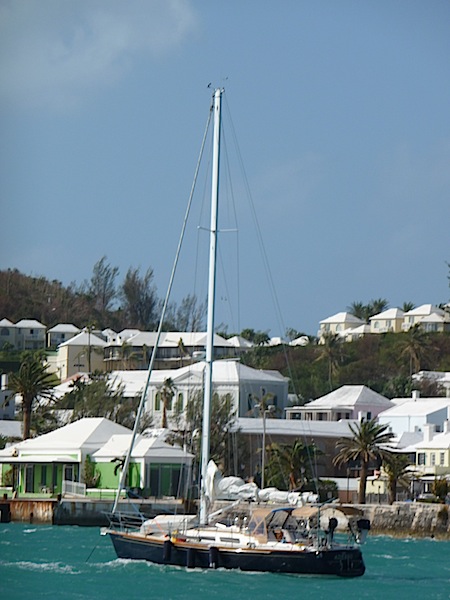 This is Adesso, which appeared in the anchorage here by Sunday morning. Still no clue as to what really happened, but I just exchanged a wave with one animate body in her cockpit 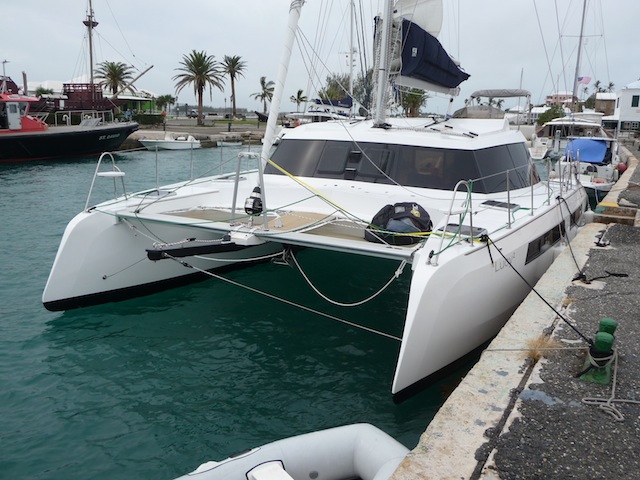 And this–surprise, surprise–is Lucy2, Alpha 42 catamaran hull no. 2, which arrived here about six hours before us. (You may remember I had an interesting time aboard hull no. 1 in January.) The owner, Jamie, had no unusual problems en route and is generally pleased with the boat 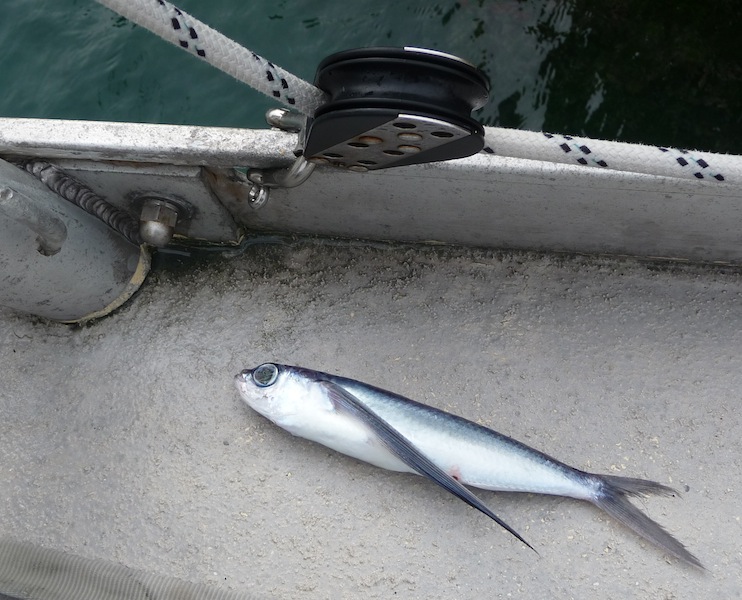 Found on deck after getting here, Exhibit 1. I’ve remarked before on how the flying fish are disappearing. I saw only two in the water during this passage after we crossed the Gulf Stream (where normally you’d see hundreds) and then found this one in the scuppers after we got here 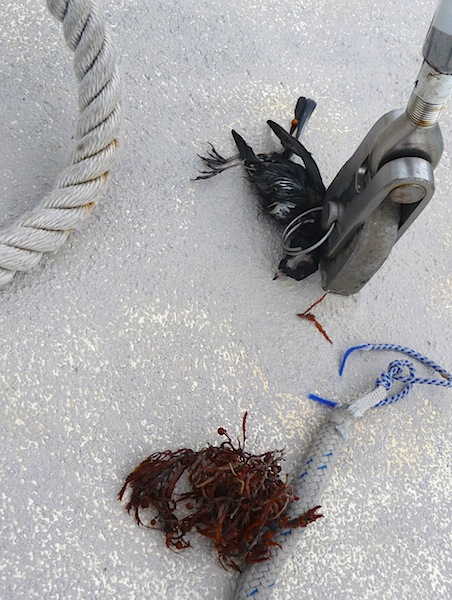 Exhibit 2. One of our shore birds, with its neck broken under a shroud’s split pin

There were a few, but nothing horribly awful. 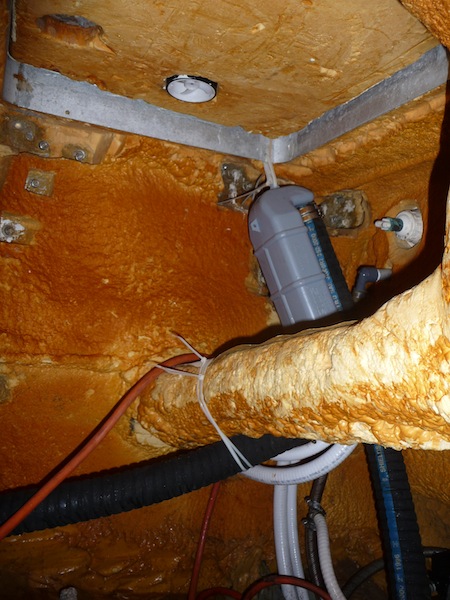 Once again the exhaust line backed up with seawater and had to be cleared by draining the muffler before the engine could be started (see previous head-in-bilge reference). I thought I had solved this by replacing the plastic Vetus snorkel at the end of the exhaust line. Now I’m thinking it was mounted too low (insert dope-slap here) and have remounted it as high as possible in the stern. If this doesn’t work, I guess I’ll have to install a valve to close the exhaust when sailing. I still don’t understand why this was never a problem before, but is now 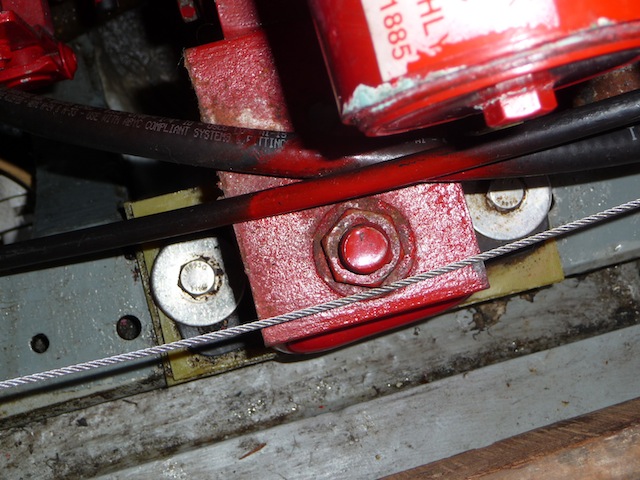 My surveyor Mark Corke warned me the engine might be slightly out of alignment, based on his inspection of the shaft-seal gland. I thought this was hoo-hah, simply a surveyor intent on finding something that might be wrong with the boat, but it turns out he was right. After some hard sailing the engine now runs with notably increased vibration, with obvious shaft wobble. But after it runs a while everything straightens out nicely again. So right now I’m trying to figure out how to tighten the engine mounts, but can’t see how to get a wrench on the bolts under the mounting beds 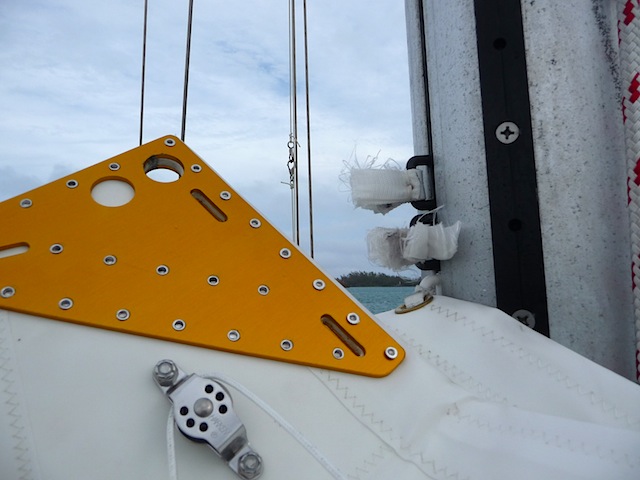 And finally one problem with the new sails. The razor-sharp edges on the slots in the new headboard cut right through the luff-slide straps. I need to take a file to those slots and put on new straps