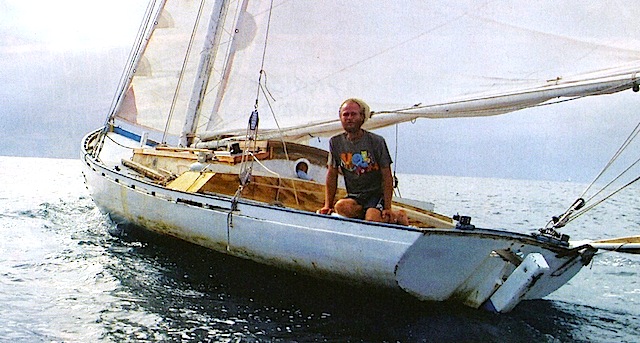 HERE’S A HOT STORY from the Where Are They Now Department that blew my mind a bit while I was cruising around in the Spanish Virgins last week. Spotted a feature in All At Sea, a local Caribbean sailing comic, by a young blonde rasta-looking dude about sailing 2,000 miles to windward from Vieques to Brazil in a converted wooden fishing smack with a pregnant wife and young son. Byline: Thomas Tangvald.

Yes, THAT Thomas Tangvald. Last known whereabouts (in my own mind, at least) was a reef on the east coast of Bonaire in 1991, where, at age 15, he eyewitnessed from a surfboard in the dark of night the crunchy death and destruction of his famous cruising dad, Peter Tangvald, and his little half-sister Carmen. Which, amazingly, was in fact the last in a triptych of awful tragedies that defined his childhood. Panel one being the eyewitnessing at age 3 of his own French mother Lydia being gunned down by pirates in the Sulu Sea. Panel two being the loss (at age 8) of his Chinese stepmother Ann (mother of Carmen), who got clubbed overboard by an errant boom during a transatlantic passage from the Canary Islands to Grenada.

You can read all about this in Peter Tangvald’s autobiography, At Any Cost: Love, Life & Death At Sea, which is exactly what I did (I re-read it, actually) as soon as I got home from Puerto Rico.

Tangvald the Elder started cruising full-time in 1957 after emigrating from Norway to the United States. He knocked around for a while in two antique wooden boats (this included one complete circumnavigation, documented in his first book, Sea Gypsy), then he designed and built from scratch a traditional 50-foot wood boat of his own, L’Artemis de Pytheas, in French Guiana during the early 1970s. In this boat he wandered the world for nearly 20 years with three different wives (there were also three earlier ones) until he finally cracked up  on that reef in Bonaire. 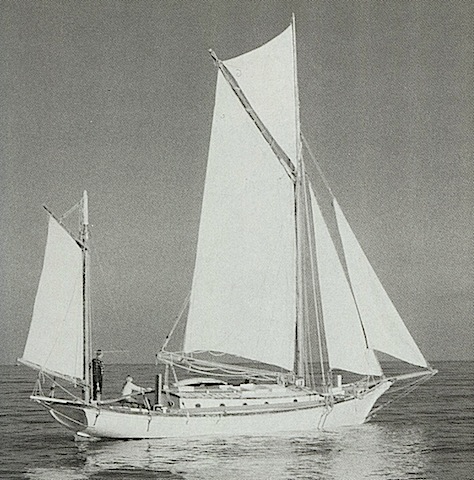 L’Artemis de Pytheas under sail in 1976. Peter Tangvald was constantly modifying her sailplan. Over the years he tried three variations on a yawl rig, a schooner rig, and a cutter rig 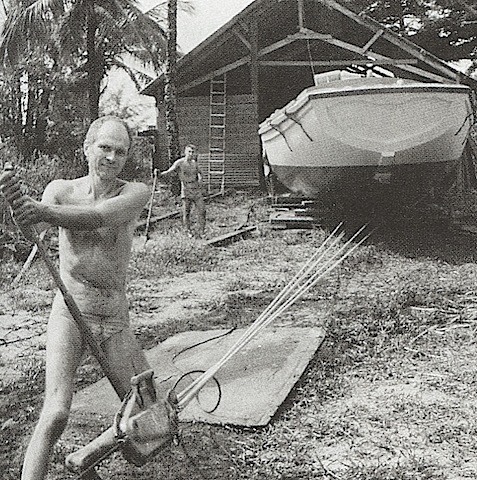 Peter Tangvald, in foreground, manhandling L’Artemis during her construction in French Guiana. He built the centerboard hull upside down, then flipped it by hand using only ropes and tackle 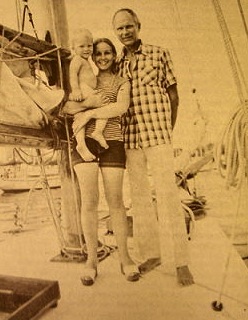 Peter with Thomas and his mother Lydia aboard L’Artemis. Lydia was a devout Christian and a very determined woman. She was killed during a pirate boarding south of the Philippines when she appeared on deck, against Peter’s orders, brandishing a shotgun 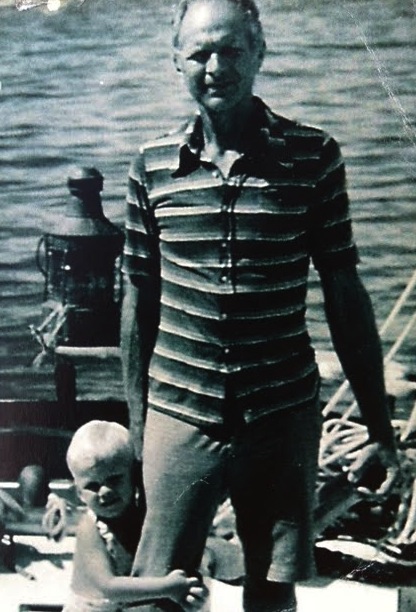 Peter with Thomas shortly after Lydia’s death. Peter was held in Brunei on suspicion of having murdered his wife, and this photo was taken by local police as they recreated the incident. Peter had told police that the pirates who killed his wife took mercy on him after seeing him in the cockpit with his little boy clinging to his leg 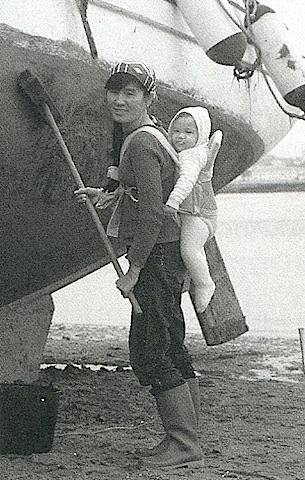 Ann Tangvald, Peter’s fifth wife, was of Chinese descent and gave up a job running a Salvation Army school in Malaysia to join the crew of L’Artemis. Here she helps scrub the bottom while minding her baby daughter Carmen

Study Peter Tangvald’s story, and you’ll see that crossing oceans with heavily pregnant seasick women was a recurring theme. Thomas was born at sea aboard L’Artemis during a passage across the Indian Ocean. Carmen was born during a cruise along the Portuguese coast. Another theme was that younger women seem to have constantly been hitting on him. Lydia, Thomas’s mother, who was only a teenager at the time, very deliberately wooed Peter away from his third wife in French Guiana. Ann, her successor, was the young headmistress at a school Thomas was attending in Malaysia when she suddenly propositioned the poor grieving widower out of the blue. Peter’s last wife, Florence, was also a teenager who insisted on moving aboard L’Artemis soon after she met the (again) grieving single dad on the ICW south of Norfolk, Virginia. Their daughter, named Virginia after the state in which her parents met, was born on the same settee as Thomas while the family was anchored out in Puerto Rico. 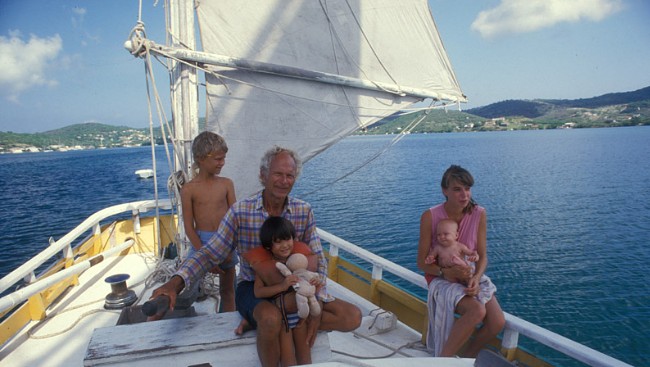 Peter Tangvald and family aboard L’Artemis de Pytheas in the Spanish Virgin Islands. The woman on the rail is his last wife Florence with their infant daughter Virginia in her lap

Florence, unlike her predecessors, survived her liaison with Peter Tangvald, as the two separated not long before he set out on his fateful voyage from Puerto Rico to Bonaire in 1991. Thomas by then had a small boat of his own, a 22-foot gaff sloop called Spartan, and was aboard this vessel being towed by L’Artemis when his father inexplicably piled up on the reef. Thomas’s brief description of the tragedy forms the epilogue to his father’s book, which was published posthumously:

In seconds L’Artemis was on it, the bow plunging down and the stern rising with such violence as to knock all the wind out of the main. ‘Non! Non!’ I screamed, as if it were going to make any difference. It can’t be real, I thought, it must be a particularly large wave. But when I noticed the limp towline, I knew this was the real thing. I looked at my Dad’s 50-foot boat being tossed about like a piece of driftwood in the surf. The boat set itself parallel to the coast. The next instant the rig snapped off with a crack audible above the thunder of the roaring waves.

I rushed inside, fumbling with the knot, frantically trying to untie my surfboard in complete darkness, for there was no moon at all. Once free, I shoved it in the cockpit and groped for a pair of pants, found none and gave up, leaving only in a wool shirt and rain jacket. I jumped in the water with my surfboard, paddling for Dad’s boat, wanting to be with them and to scramble ashore together. But when I got closer, I was afraid of getting crushed by the boat.

I stayed as close to L’Artemis as possible, waiting for a break in the waves to dash in and jump ashore. Under the light of the stern lamp, I could see the boat being destroyed with ghastly efficiency. She would leap in the air with the rising water and, as the water went back out, the boat would drop 10 feet onto the sharp coral with the sickening noise of cracking wood and my sister’s hysterical screams coming from inside. For a minute or two, I saw my Dad sitting in the companionway shining a flashlight out to sea and then across the reef. I put my surfboard up in the air, but I don’t think he saw me.

Then L’Artemis’s stern lamp went out from the successive shocks, leaving her completely in the dark. I paddled out and way from the breaking waves. After a little while, I didn’t feel panic at all. Instead it was a lot like a dream. I figured I just had to keep paddling to stay warm, and wait until sunrise when I could climb the coral and find them both waiting for me.

After some three hours, the sun finally came up and I could see the coast. At around 9 o’clock, I finally got on shore without too many scratches but, after staying six hours on the surfboard, I had massive friction burns. Immediately I set out searching for my father and sister–but they weren’t there. 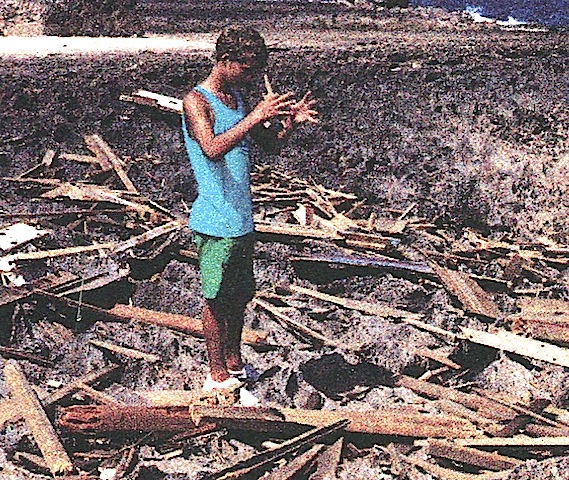 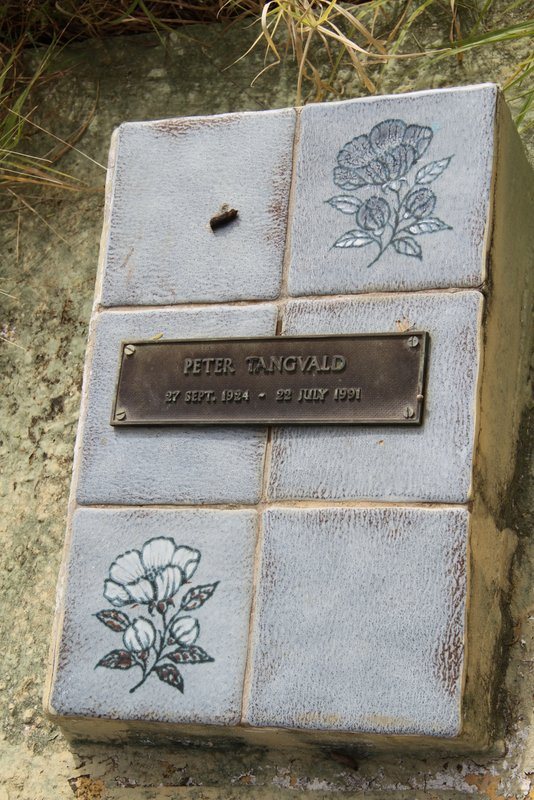 According to one source I’ve found online, Thomas was sent to live with friends of his father’s in the tiny European mountain nation of Andorra and spent three years there before going off to attend school in Great Britain. After graduating and working in Cornwall for a while, he bought himself a tiny 22-foot Itchen Ferry gaff cutter and sailed it to Culebra in 2000. 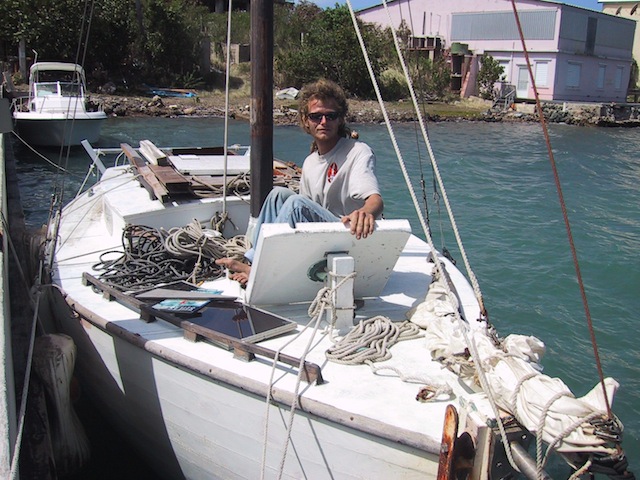 Thomas aboard his 22-foot cutter Melody, which he sailed singlehanded non-stop from the UK to Culebra without electronics or proper charts. He taught himself navigation and built his own sextant aboard his father’s boat as a boy

According to his own account in All at Sea, Thomas ultimately settled down and started a small farm on Vieques, which he ran with his wife, Christina, and their young son, Gaston. For reasons not explained, he decided some time ago he wanted to give this up and emigrate to Brazil. He decided, too, the family must travel by boat and so acquired a 34-foot open-cockpit “nativo” sloop, Oasis, that he had known and admired when living in Puerto Rican waters with his father as a boy. 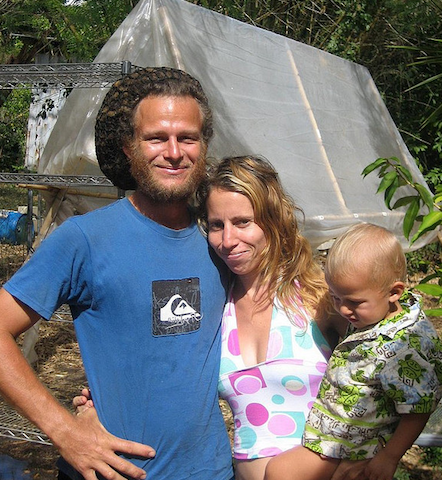 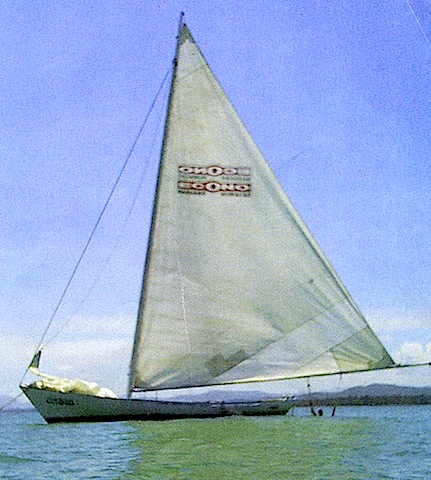 Oasis soon after Thomas purchased her. Her design is based on traditional Puerto Rican fishing smacks, and she was raced successfully for many years

The modifications Thomas made to Oasis are described in All at Sea‘s March issue. The first leg of the journey to South America, wherein we find Thomas and family racing to get to their new home before Christina gives birth to their second child, is covered in the just released April issue. The exciting conclusion is scheduled to run in May. 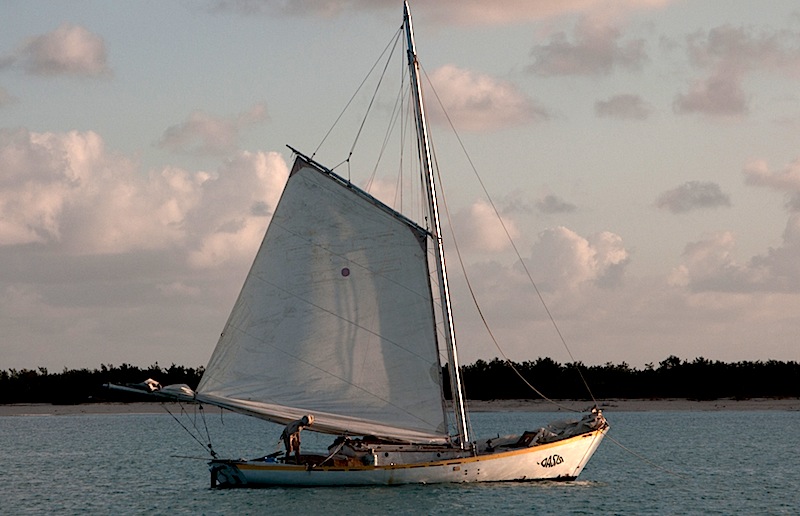 Oasis in Barbuda en route to South America in April 2012. In addition to adding a house, Thomas cut down the sailplan and converted the boat to a gaff rig (Photo courtesy of S/V Fri Flyt) 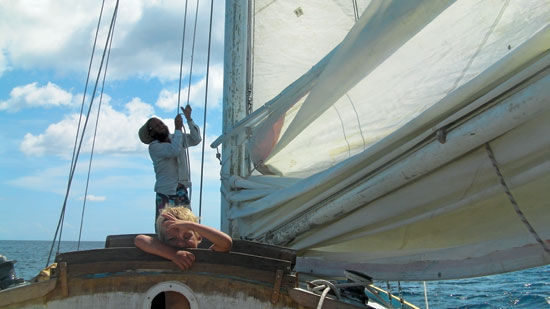 I am heartened to have learned all this and am particularly pleased that Thomas’s personal mode of seafaring–in traditional wooden boats, with no engines or electronics–so closely mirrors that of his father. I’m sure, too, it is no mere coincidence that Thomas, like his father, managed to get himself into the predicament of having to play skipper while tending a pregnant seasick mate. That he has gone through this to reach South America, where his parents first met and where his father built the boat he was born on, also seems more deliberate than accidental.

I look forward to the May issue of All At Sea, with bated breath as it were, and meanwhile wish this young man all the best. I do hope we hear more from him.

What’s that? You’re wondering about his half-sister Virginia?