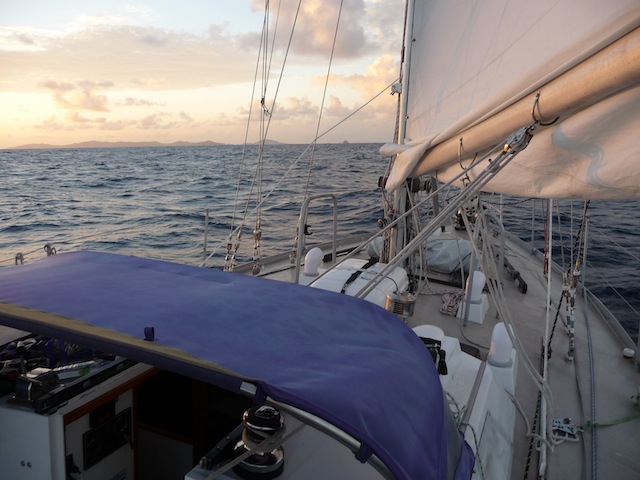 WE’RE HERE! In the photo, if you look carefully, you’ll see the lumpy bumps of dry land–the island of Culebra to be precise–that we encountered at sunrise yesterday morning as we swooped in from the north on a moderate east-southeasterly breeze. By 1030 hours we were tied up at the fuel dock at the Puerto del Rey Marina in Fajardo, awaiting a U.S. customs inspection.

This, strange to say, focussed largely on our garbage. We answered several questions about the food we bought in Bermuda (all of it processed stuff or fresh produce that, of course, had originally been imported from the States) and our two small bags of garbage, composed mostly of plastic packaging we hadn’t thrown overboard en route, were then quarantined. We subsequently had to pay the marina $15 to remove these biohazards from the boat.

All told we were just two hours shy of six days on passage. The weather pattern, interestingly, was a bit back-asswards. Normally you see light variable wind south out of Bermuda and are motoring a bit before you get into strong easterly tradewinds further south. In this case, we at first had strong northwesterly wind, veering northeasterly and then easterly. 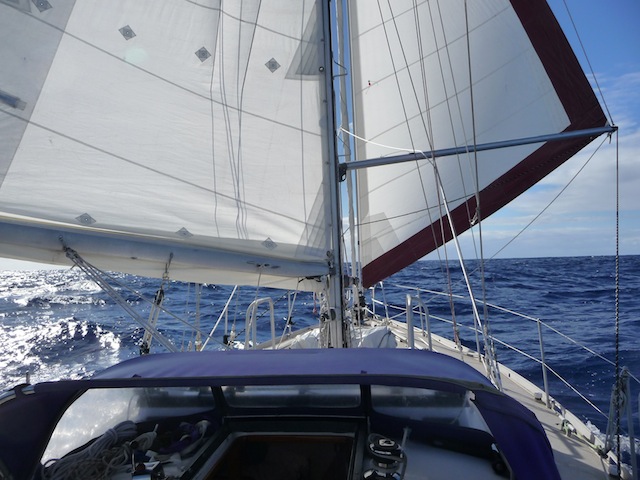 Down in tradewind country, thanks to a trough just north of the Dominican Republic, the wind went southerly and light and we had to resort to internal combustion for a while. We spent in all a tad over 33 hours listening to the drone of the engine and burned almost 22 gallons of diesel fuel. (Including the leg to Bermuda, we consumed a total of 37 gallons between NH to PR.)

First, in Bermuda, we modified the rudder stock, which over time had worn away at the underside of the back end of the tiller, such that the tiller was riding too low and chafing things as it swept back and forth across the aft deck. 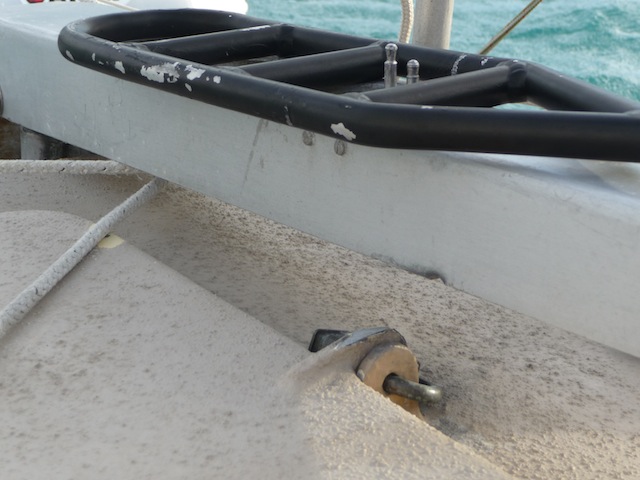 Major chafe point where the tiller and a deck fitting had quarreled while sailing from NH to Bermuda. The tiller was also chafing the steering lines from the windvane, which pass beneath it

To fix this we simply stuck a thin shim on the top of the stock with some JB Weld. 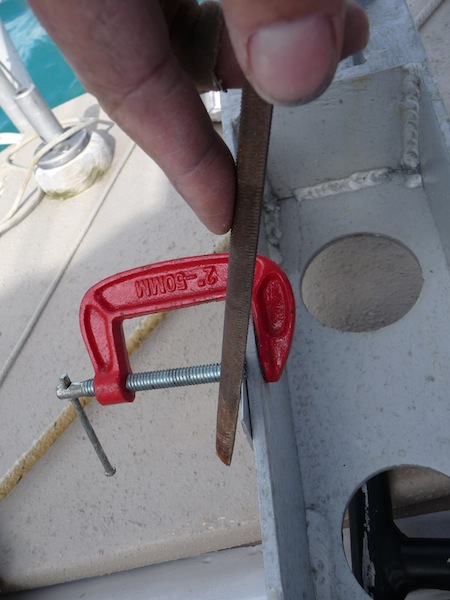 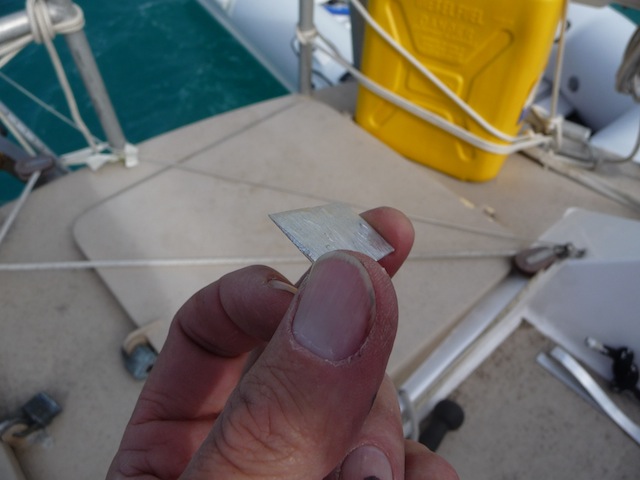 We fashioned the shim out of some thin aluminum stock 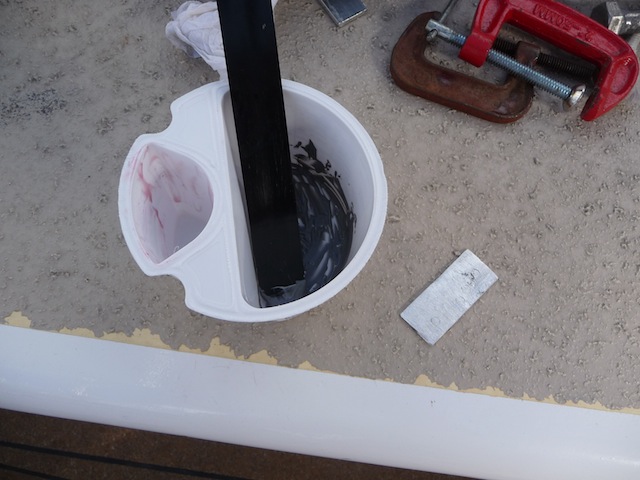 Mixing up the JB Weld 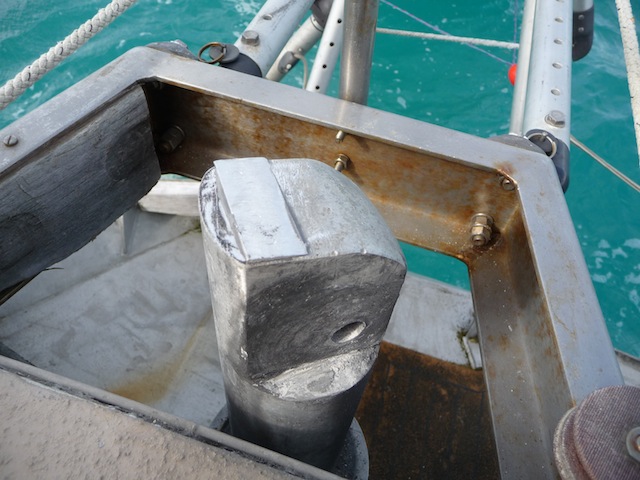 The shim in place 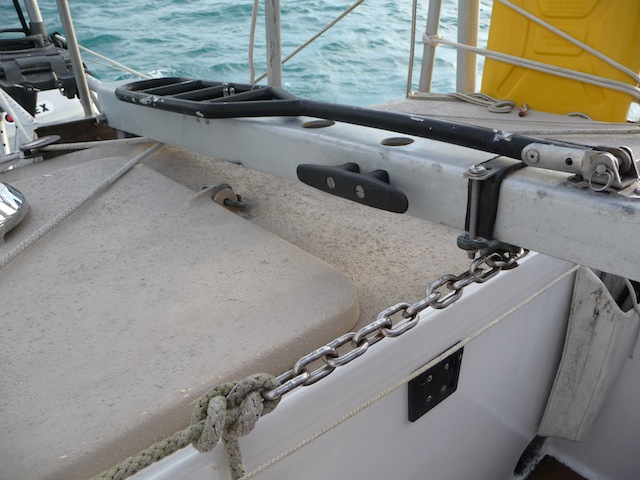 The tiller reinstalled, with improved clearance

Between here and Bermuda we had more steering problems, when one of the steering lines from the vane to the tiller suddenly broke under load. I gave myself a dope-slap, as these were rather old, and I really should have changed them before ever leaving New Hampshire. Fortunately, it wasn’t as hard as I thought it would be to replace the lines while underway. 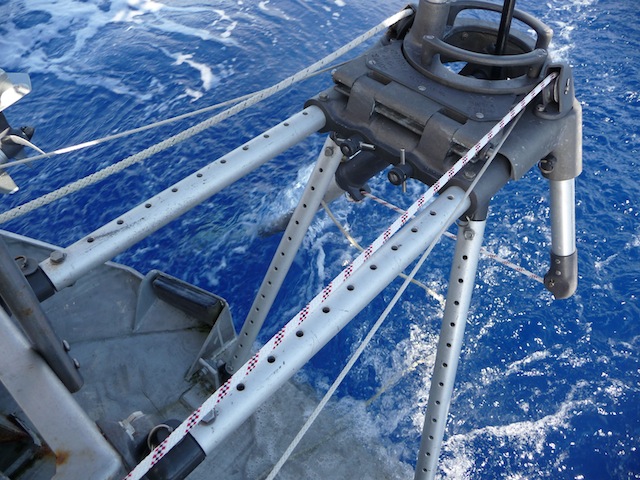 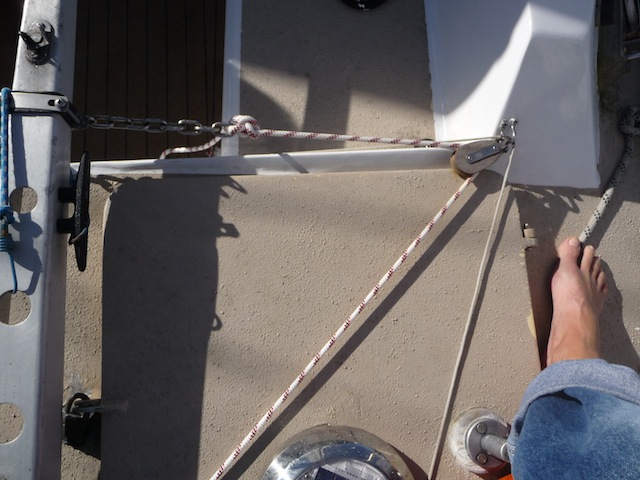 One new line installed. While a crew member steered the boat, I dangled off the stern a bit (on a tether, of course) and rove the line through the vane leg to the servo oar and thence to the tiller. We replaced the other line later while motoring with an electric tiller-pilot steering

Our last problem involved the engine’s exhaust line. On Lunacy it is a long uphill climb from engine to outlet, and the exhaust line during the passage to Bermuda had overfilled with water–a combination, I think, of accumulated exhaust water and sea water driven up the boat’s rump hole while running off in big seas. We thought we had cleared it (after a couple of hard starts en route to and in Bermuda), but the problem persisted during this last leg. In the end, we had to drain the line entirely, which involved a hot, slimy, stinky Battle of the Bilge, wherein a small inaccessible plastic cap at the back end of the engine’s muffler was, with great effort, removed and then replaced.

Minnie, alas, jumped ship in Bermuda, as she was lured on to a larger boat, a swank Amel Maramu, that was a bit undermanned. 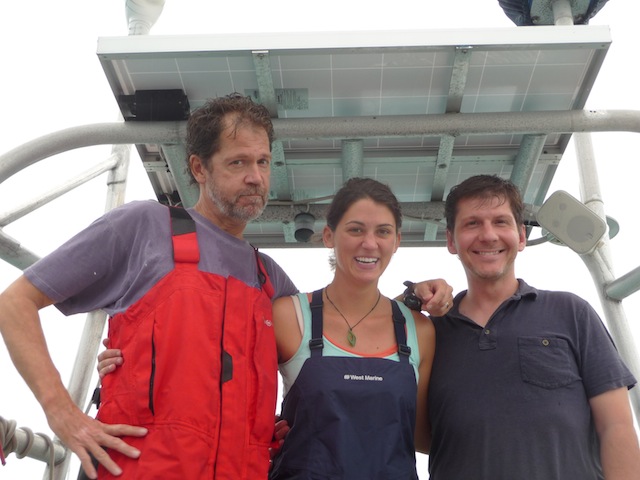 Fortunately, we could afford to lose her, as our notorious old shipmate, Chas. “May I Cast Off Now?” Lassen, of SEMOSA fame, also joined us in Bermuda. 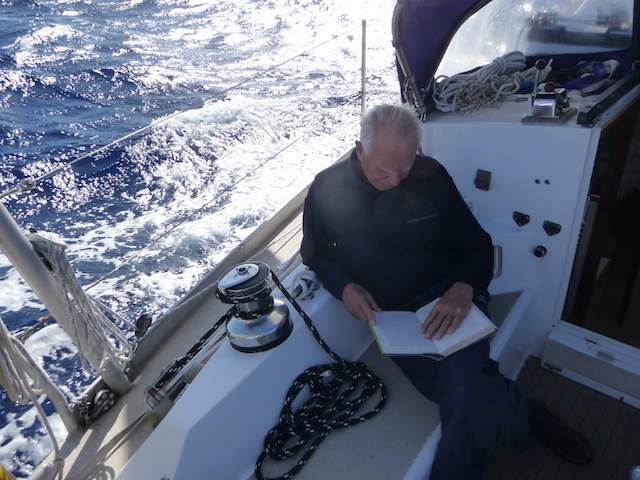 He has twice helped sail Lunacy in the fall from New England down to Bermuda, and it was a pleasure to have him aboard at last on this more genteel leg from Bermuda to the W’Indies.

Normally on this trip, starting from a bit north of Bermuda all the way down to the islands, I see hundreds of flying fish flitting across the wavetops. This time, however, we saw very few. Literally not more than a dozen. South of Bermuda I usually have to pick fish off the deck every morning. 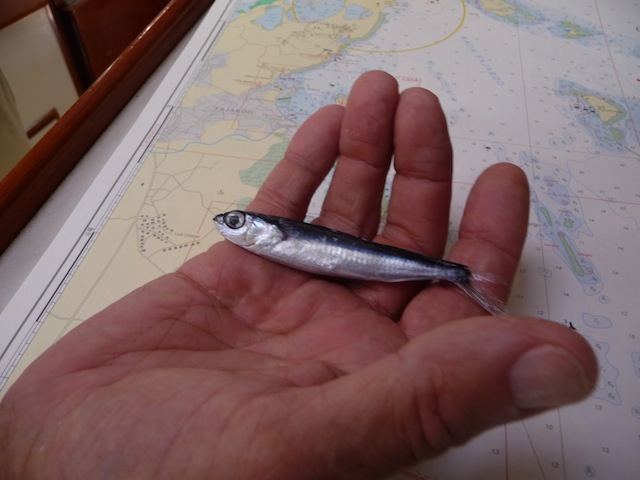 This time we had only one, and a very small one at that.

WTF is happening here? Where did all the fish go?