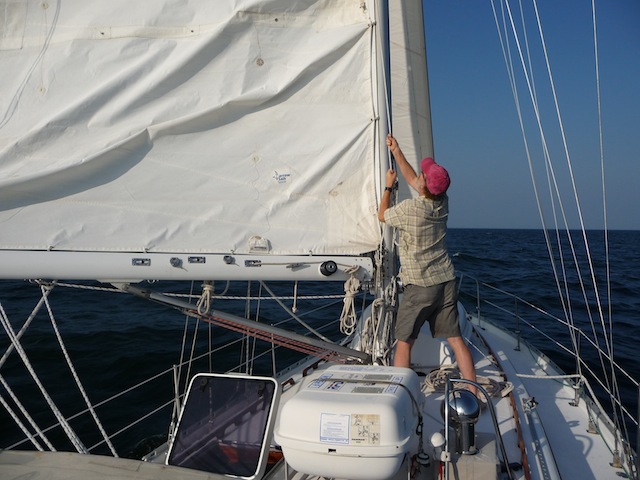 HAD A CHANCE to return a favor last week, as my friend and neighbor, Jeff Bolster, needed crew to help him get his new boat all the way home from Florida. (You may recall Jeff helped me sail Lunacy back from Bermuda just two years ago.) Jeff’s original plan had been to sail the boat–a Valiant 40 built in Texas back in the 1990s–up here to Baja Maine in one fell swoop. But the boat’s engine had different ideas.

After an unscheduled layover first in Baltimore (to fit a new turbocharger) and then in Norwalk (to replace a bell housing that somehow managed to split in two), Jeff (seen up top wrestling with his new mainsail) at last had the pleasure of piloting his new ride into the mouth of the Piscataqua River twixt Portsmouth and Kittery not long before sunset on Friday.

Lesson 1: Do not buy a boat named Lantana. Jeff’s first unpleasant surprise came at the closing of the sale, when he learned the money he’d wired the seller had been sequestered by the U.S. government, because the boat had the same name as an Iranian freighter suspected of carrying weapons of mass destruction.

Lesson 2: No matter how neat and tidy and well maintained the boat seems to be, expect to find lots of stuff that needs fixing.

In this case, Jeff did expect he would need to repower his new boat, though he had hoped the old engine might last another season or two. But now, in addition to the turbo and bell-housing problems, the engine has been regularly leaking oil, coolant, and transmission fluid, so Jeff is hoping to get a new engine installed ASAP. 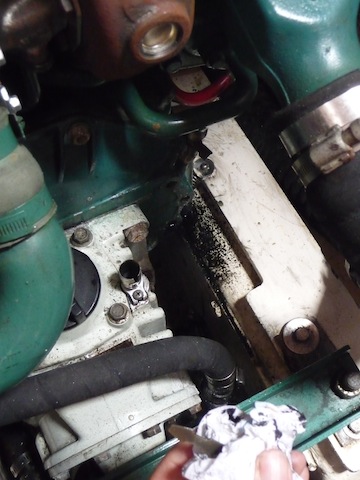 Ye Gods! This oil leak seems to be emanating from somewhere around the new bell housing

One thing he did not expect was deck leaks. As a devotee of traditional wooden craft whose last ride was an antique Aage Nielsen yawl, Jeff was willing (albeit grudgingly) to at last make the move into fiberglass, because he assumed this meant he’d see less water inside his boat. But no… his biggest disappointment (so far) has been watching torrents of water enter his new boat whenever it rains, and rebedding all the ports and deck hardware is now a priority item on his punch list.

Lesson learned: when buying a used glass boat, be sure to have the surveyor wash down the deck with a high-pressure firehose.

But that’s just the bad news. We did in fact have a fine time sailing the boat up from Norwalk. Our exit could not have been more serendipitous. We motored only a short distance from the Norwalk Yacht Club down the west side of the Norwalk Islands, where Jeff first got addicted to boats as a lad, then turned east out on Long Island Sound in a moderate southerly breeze that carried us through the rest of the afternoon, and all through the night, down the length of the Sound and out the Race on a fair current. 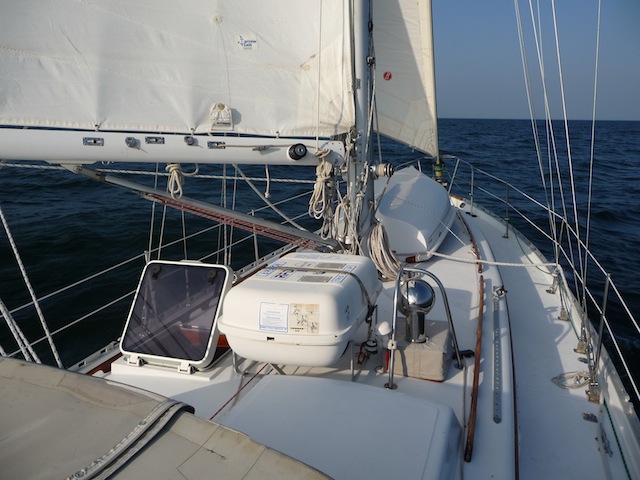 Sailing down the Sound toward the Race 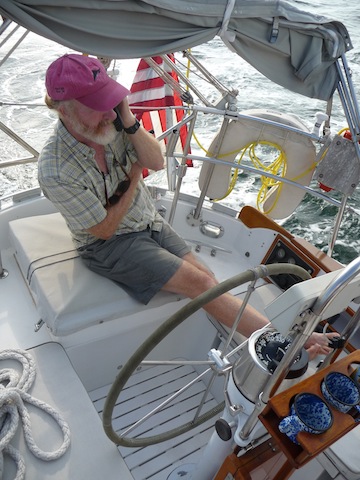 Jeff checks in with his bride. Note the cockpit grate, fabricated from Starboard. A nice clean look, but I found it a bit slippery when wet

The wind finally expired early the next morning, leaving us adrift west of Block Island. The motor, thankfully, deigned to start again, and by noon we had reached Cuttyhunk, where we picked up a mooring and went ashore to explore. 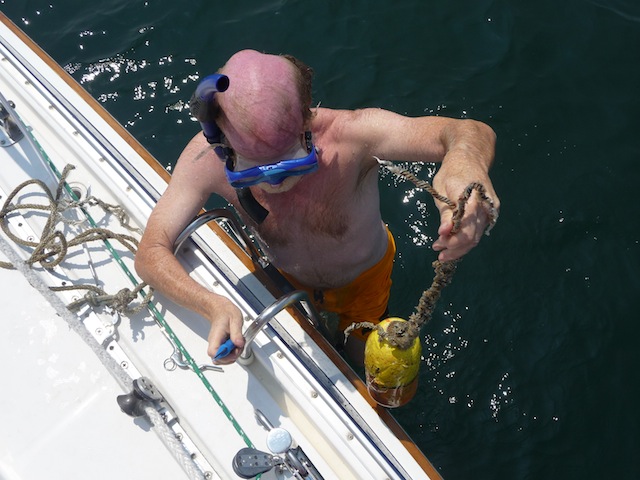 Coming into Cuttyhunk we picked up something in the prop. Jeff jumped in the water to investigate and brought up first a bit of polypro line, then a bit of line with a pot buoy attached… 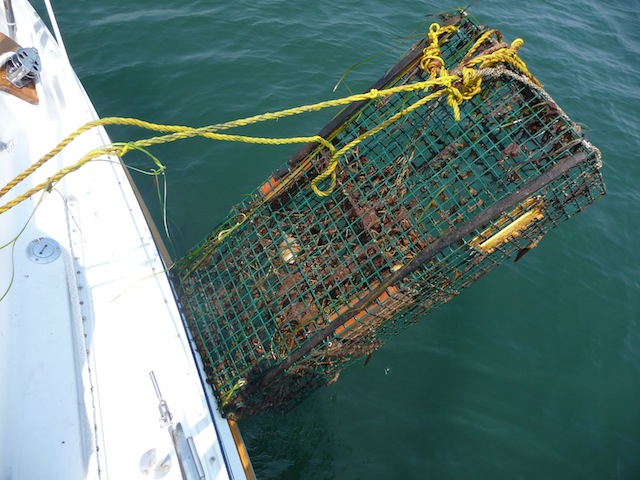 …and finally the pot itself! Turned out we’d dragged the whole lot into the mooring field with us

Counting toes and fingers on all of my feets and hands, I realized it had been 18 years since I last visited this island. It is not nearly as sleepy and idyllic as it once was. Back in the day there was only one small blister of commerce here, a tiny hole-in-the-wall grocery store with a handful of shelves decorated with random dry goods. This has morphed into a much fancier, more substantial store, and a small collection of tourist boutiques and restaurants have sprung up in its vicinity. There is now also a large fleet of golf carts that perpetually roams the village like an army of ants foraging for food.

The best thing about Cuttyhunk was, and is, that most of the island is undeveloped, with a nice maze of trails wending through beautiful orchards and meadows in its interior. We hoped to hike these, but the locals warned us of a fearsome deer-tick infestation and advised us to stick to the sidewalks in town. 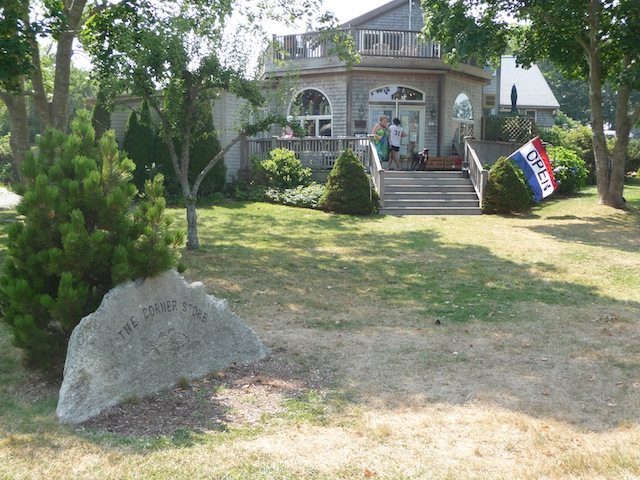 The Corner Store is now trendy and upscale 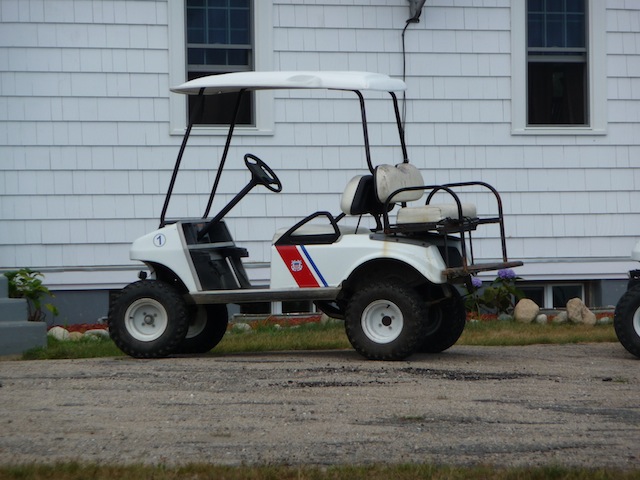 Even the Coast Guard has its own fleet of golf carts 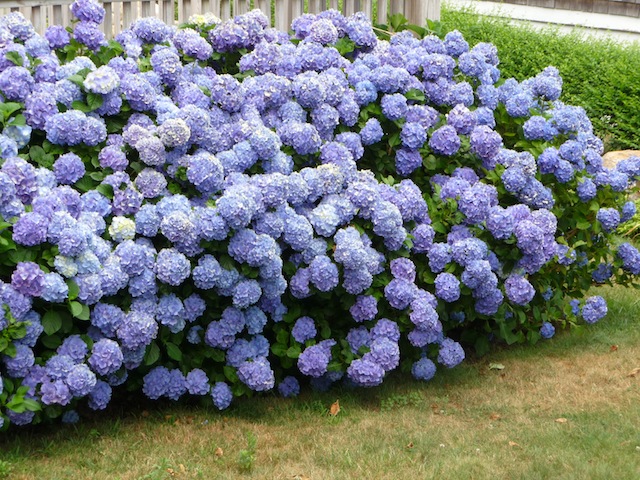 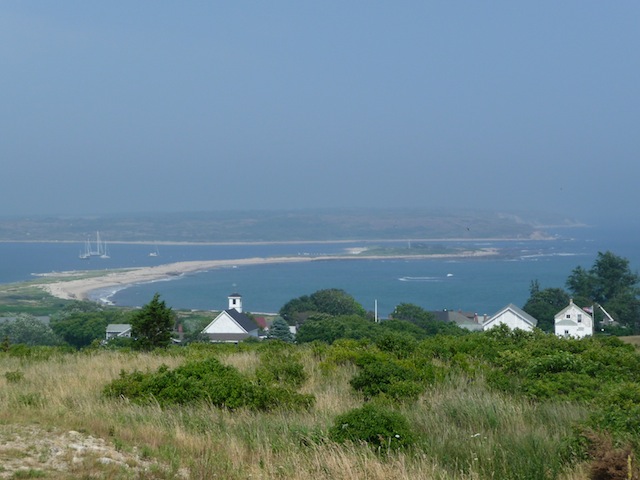 View from Cuttyhunk, atop the hill behind the village, looking north 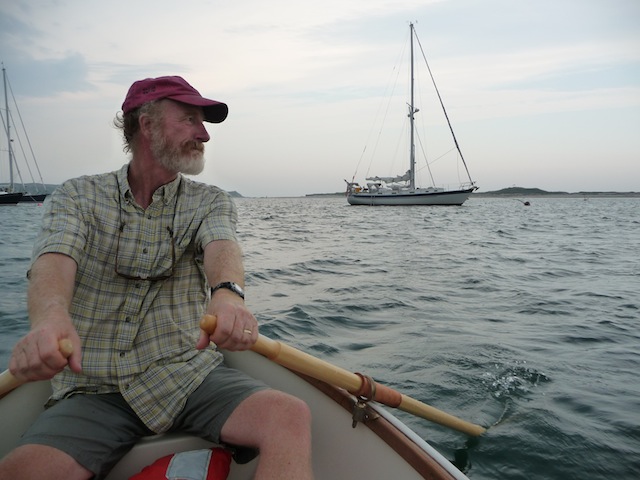 Jeff, an ex Trinity College crew jock, definitely prefers oars to outboards. Here he is rowing back to his new boat (on the right) after our excursion ashore 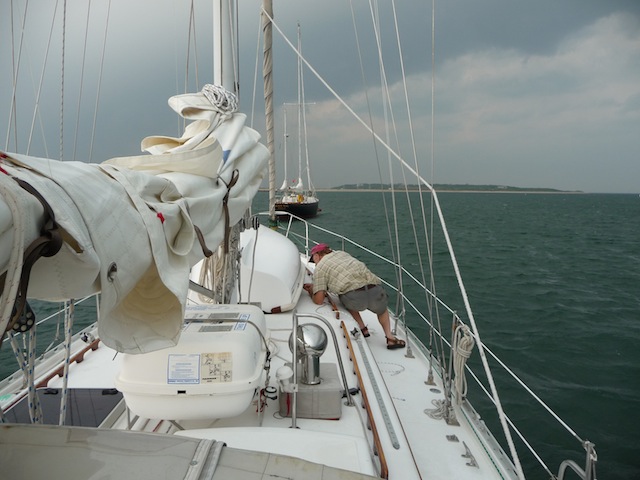 We planned to leave Cuttyhunk the following morning at 0500 to catch the first tide up Buzzard’s Bay and through the Cape Cod Canal, but woke before sunrise to biting rain and a 20-knot northeasterly headwind. We returned to our berths and on rising again some hours later found both wind and rain had abated. After a late breakfast, we motored up the bay and transited the canal on the first trickle of the next fair current. By late afternoon, after a quick stop at the basin in Sandwich for fuel, we had emerged on Cape Cod Bay. 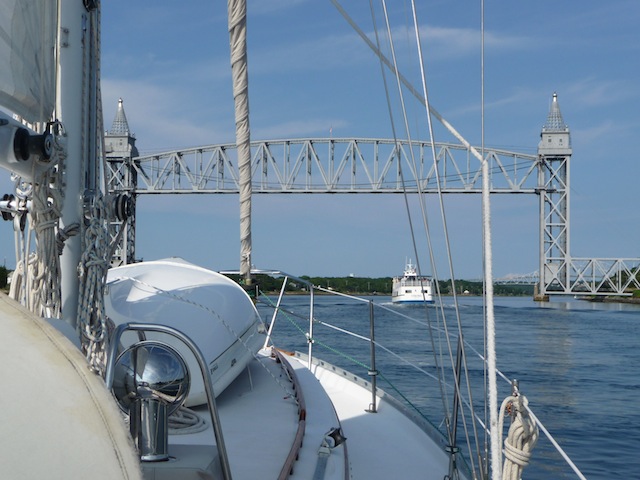 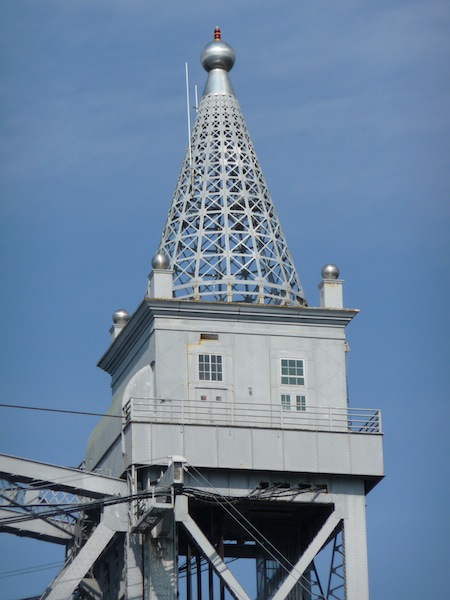 The next bit was probably the most sublime. Sailing across the bay for Provincetown, we had a light easterly with just enough south in it that we were able to fly the boat’s asymmetric spinnaker (more of a drifter, really, as it has a wire luff). We carried this through the sunset into the night all the way up to P-town, and didn’t snuff it until we were right outside the harbor. 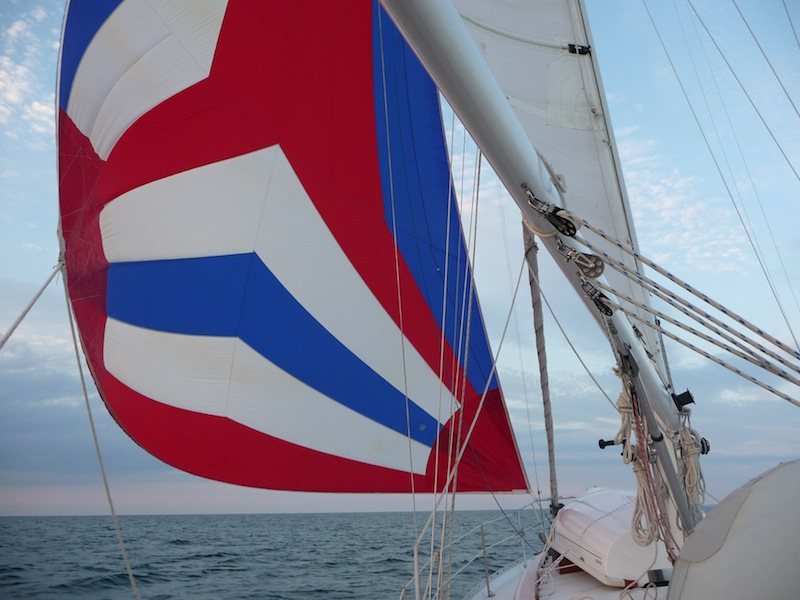 Caught six hours sleep on a mooring, then we were off again. We had wind as far as Cape Ann, and again flew the spinnaker, but this time the sun-rotted (and somewhat undersized) spin halyard couldn’t stand the strain. 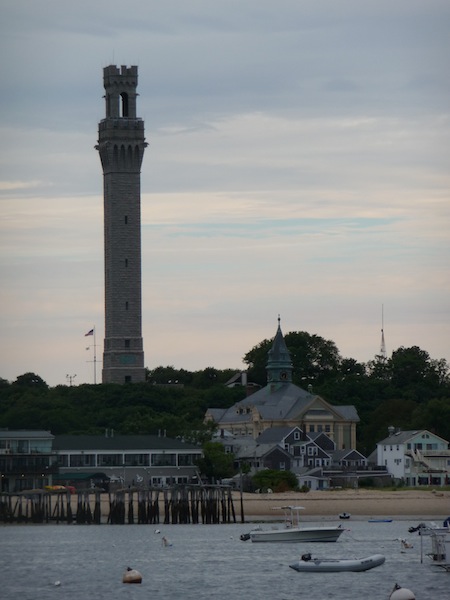 Pilgrim’s Monument at P-town, as seen from our mooring just before we sailed off it 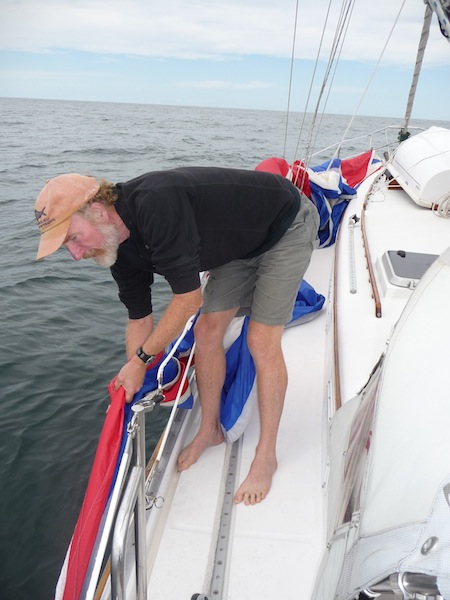 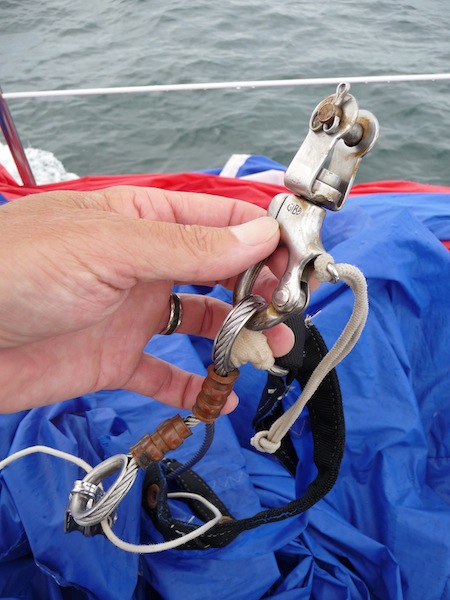 We were very grateful this had not happened the night before, in the darky dark, on the approach to P-town and were content enough to motorsail the rest of the way to Kittery.

Note on Navigation: Jeff, an ex pro schooner jockey, is pretty traditional in this department. He’s strictly a paper-chart guy who uses GPS solely to get a position to plot. He has contempt even for waypoint data, so we sailed much of the time not knowing precisely where we were. We paid constant attention to everything we saw around us, strived to identify all landmarks and aids to navigation, and used this information to constantly update an estimate of our whereabouts in our heads. Every hour or so we confirmed it by carefully plotting a GPS fix on the chart. 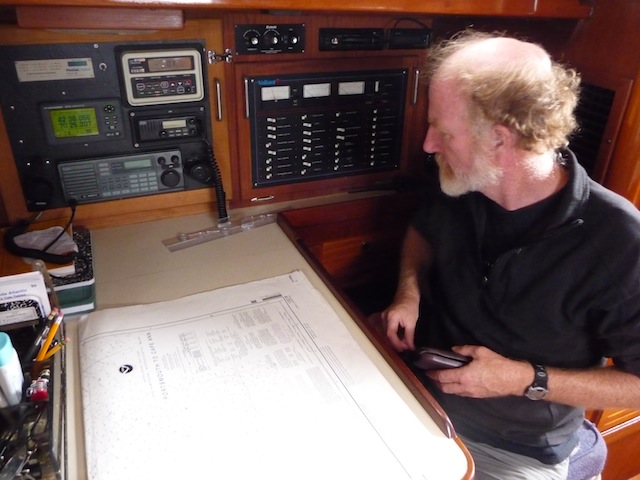 Cap’n Jeff in his element

I used to navigate this way. Indeed, I’m old enough that I used to navigate without GPS at all. But I’ve now been navigating with chartplotters for so long that I was at first a bit unsettled at having to rely on my eyeballs and brain so much. The old habits came back quickly enough, but the experience made me realize just how important the old habits are. It terrifies me to think that there are now many people running boats who have never navigated without plotters and have never developed these habits.

Lesson learned: Plotters make you lazy! Try getting somewhere without one once in a while.

Addendum: This is Jeff’s punch list for the “new” boat, as of 1655 hours last Friday…

9. Liferaft and canister to Revere for repacking

IT IS INCOMPLETE and, in my opinion, should also include the following:

16. Consider replacing all (or most) running rigging

19. New autopilot? (Can existing ram be married to a new control head?)

Plus, I’m sure there’s a whole bunch of other stuff that will crop up quickly enough.

Final lesson learned: A boat is not an object, it is a process. If you do not on some level enjoy the process, you will not enjoy owning a boat.

Particularly a used one.