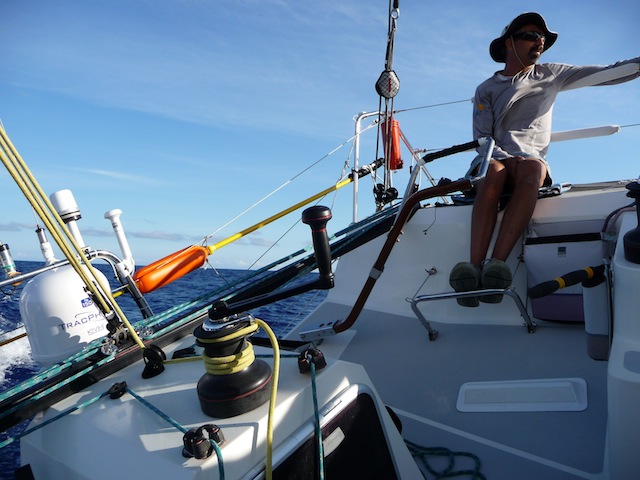 JUST RETURNED YESTERDAY from delivering the Akilaria Class 40 Amhas back from the Onion Patch with Brian Harris (that’s him up top), who runs the boat for her owner, MacKenzie Davis. Brian and MacKenzie finished third over the line in the Doublehanded Division in the recently concluded record-breaking Newport-Bermuda Race and corrected out to 6th out of 9 boats. Admittedly, this is a less than fantastic result, which Brian attributes to not having a proper A3 reaching sail aboard. Instead he and MacKenzie shuttled back forth between a Code 0 and Code 5 sail while watching other boats flying A3s dance away from them.

On the other hand, they did manage to sail a 40-foot boat from Newport to Bermuda, a distance of over 600 miles, in less than three days. Which gives you an idea of a) just how optimal the conditions were in this year’s race, and b) how fast a Class 40 can sail when pressed. According to Brian, Amhas hit a new personal best speed of 24 knots during the blast reach out to St. David’s while surfing down some gnarly cross-grained seas in the Gulf Stream. It was, he assured me, a very bouncy ride, but exhilarating all the same.

“Given the forecast, we all knew it was going to be a sprint,” he told me. “The whole race I think only got about two hours sleep a day.”

I was hoping for a far less drastic experience on the delivery back to the States, but still looked forward to getting some sense of the boat’s power. 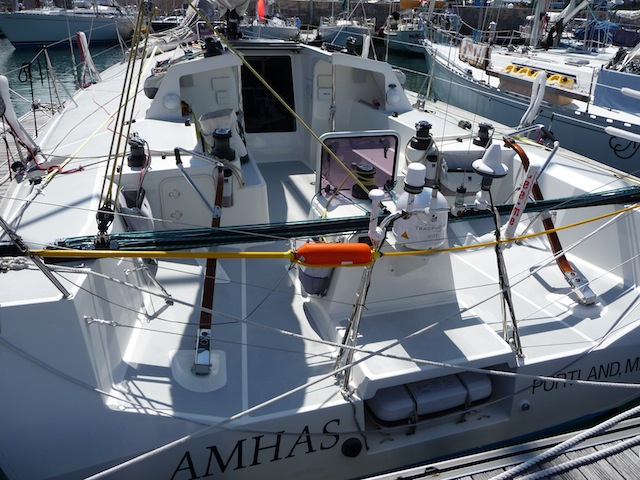 Amhas on the dock in Hamilton the day before our departure 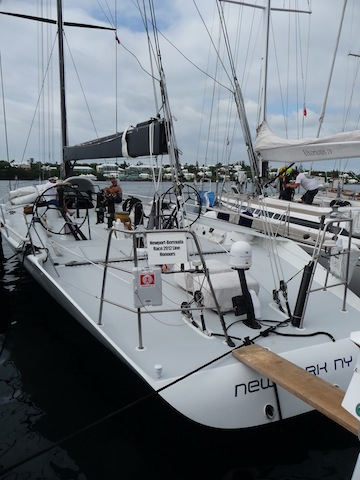 Dock walking at the Royal Bermuda Yacht Club. Rambler won line honors and set a new course record that may stand for some time 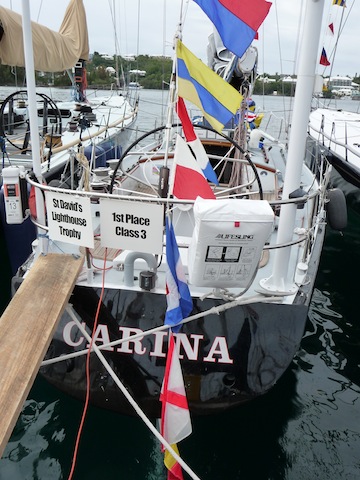 Overall winner Carina, a McCurdy & Rhodes 48 built in 1969. She’s won twice before, including the last race in 2010. If she wins next time, she’ll be the first to take three in a row since Carleton Mitchell’s famous S&S centerboard yawl Finisterre 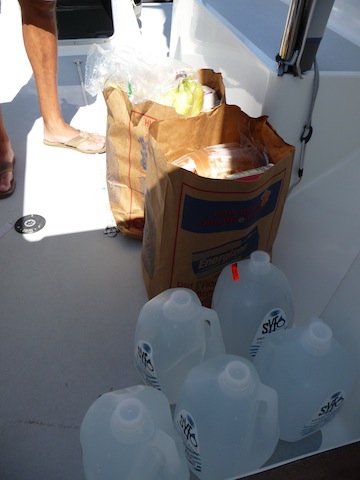 This, I swear, is all the provisioning we did in Hamilton

Our very first night out of Bermuda, I did get a sense of how gruesomely uncomfortable these beasts can be. We had northwesterly headwinds blowing in excess of 20 knots, and though we were not pressing the boat, and even cracked off a bit to ease the motion, it was so damn noisy and bouncy down below that sleeping–or doing anything, for that matter–was just about impossible.

Shake, rattle, roll… WHAM!!! BAM!!! Falling off waves it felt like the boat was being dropped 50 feet flat on to concrete. Out in the cockpit, at least, the scenery was surreal, gorgeous even. The sea that night was electric, ablaze with ragged scars of vivid green light on the breaking wave crests. Directly to leeward there was an incessant milky blur of phosphorescent spray flying as we blasted through the water.

Fortunately, the wind eased late the next morning (though it stayed westerly throughout our passage) and life thereafter was much more sanguine. Even under the best of circumstances, however, these boats will never seem too comfortable to a cruiser like me. 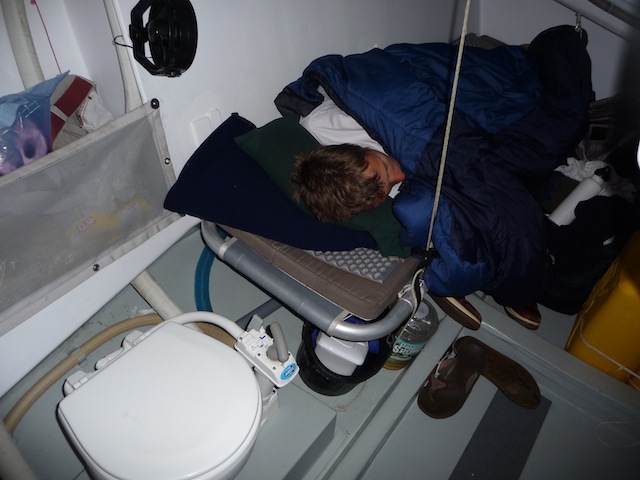 Deluxe sleeping accommodations. Note the conveniently placed toilet. This, it turned out, was for display purposes only 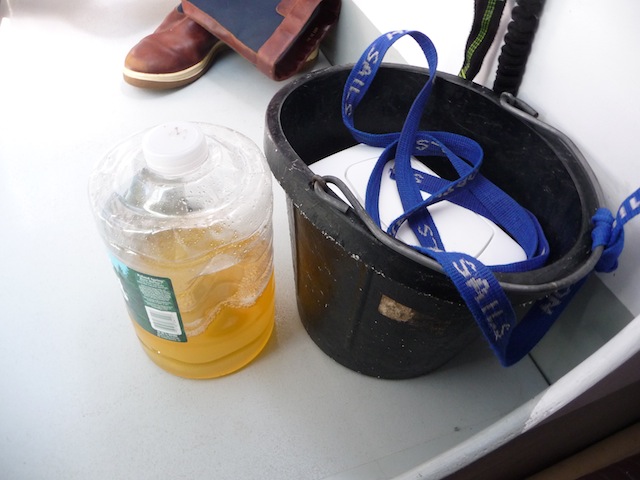 These are the waste-disposal systems we actually used 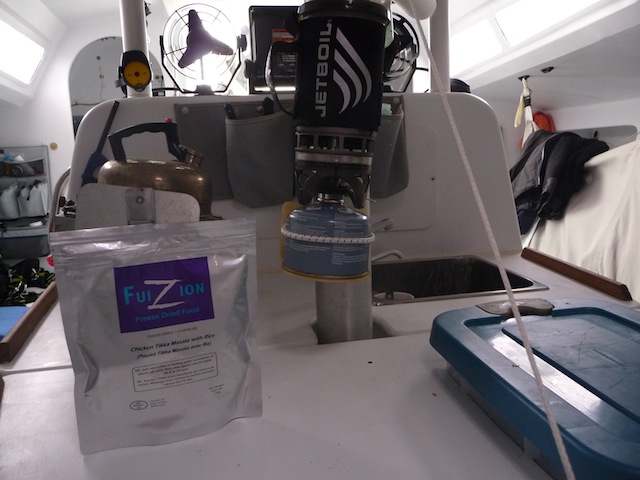 The well-appointed galley. At first I was intimidated by the fearsome JetBoil, but eventually learned to love it 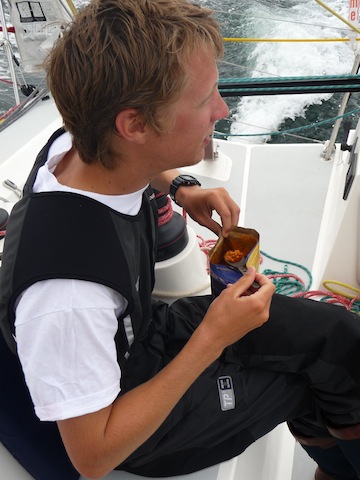 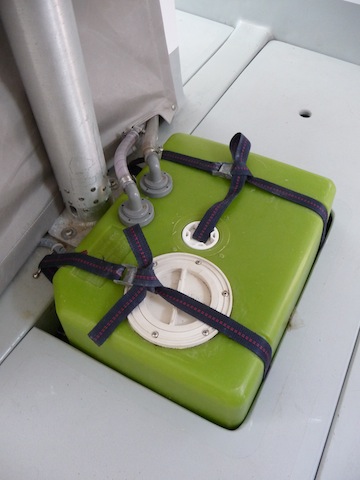 Our one and only domestic freshwater tank. It holds 12 gallons 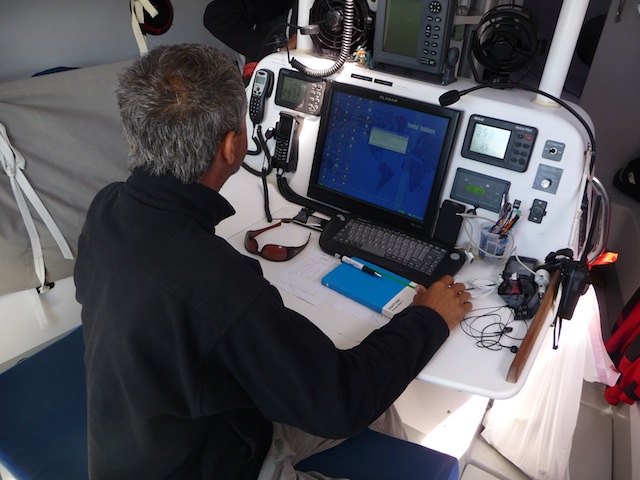 The nav station is definitely the place to be

Aside from the lack of amenities, the sailing was fine. Steering a Class 40, I found, was a bit uncanny, but it was also very cool–sitting on a perch aloft on the windward quarter with your hand on a tiller (not the tiller, as there are two of them), controlling a rudder way down there to leeward, with a little rooster-tail flying out behind it, was most gratifying. It really is something like flying a hull while sailing a catamaran. 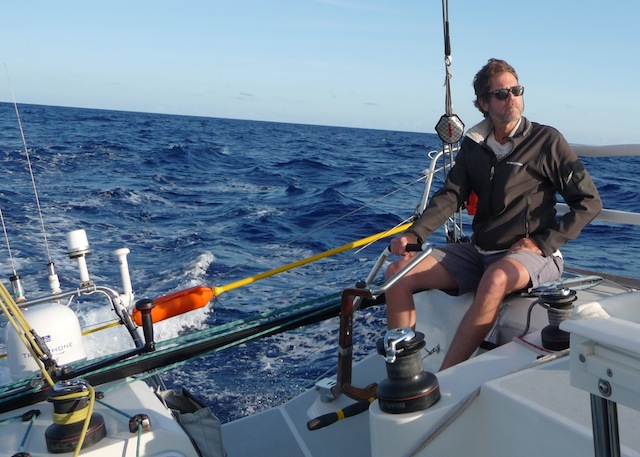 Yours truly on the helm 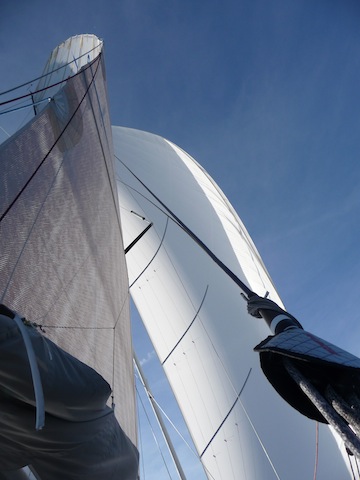 Flying along under the Code 5 and full mainsail 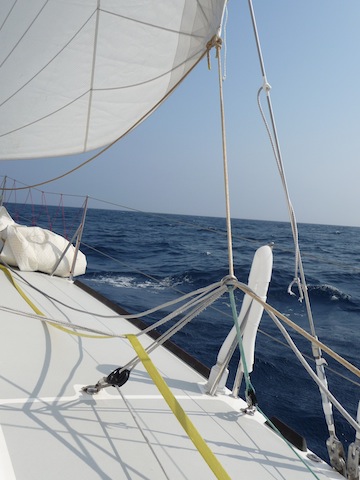 An ingenious sheet lead system. It’s infinitely adjustable, in all three dimensions, but involves no heavy hardware. The hose behind it is for venting the water ballast tanks 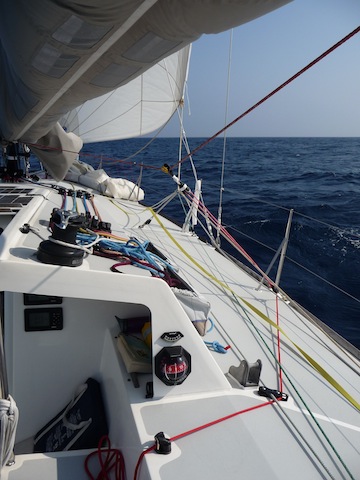 Now at last I know what a downfucker (red line) is. It can serve as a side-slung boom vang or as a barber-hauler for a spinnaker sheet 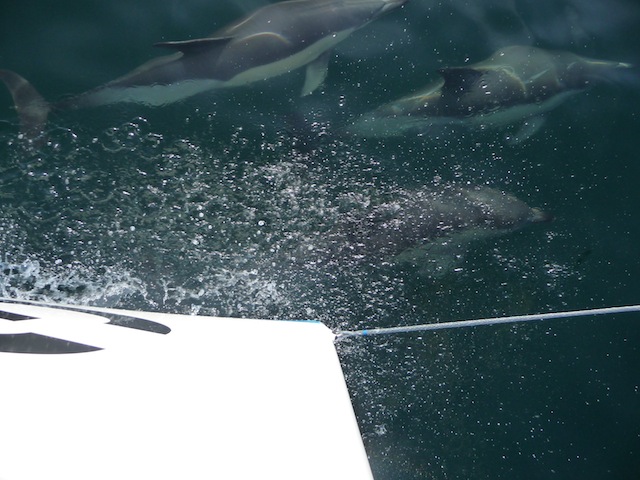 In the end we sailed from Bermuda to Portland, Maine, a distance of over 700 miles, in almost exactly four days, in light to moderate conditions (except for the first night and the last few hours) without running the engine very much (just three hours, I’d say, with the prop turning) and without pressing the boat at all. 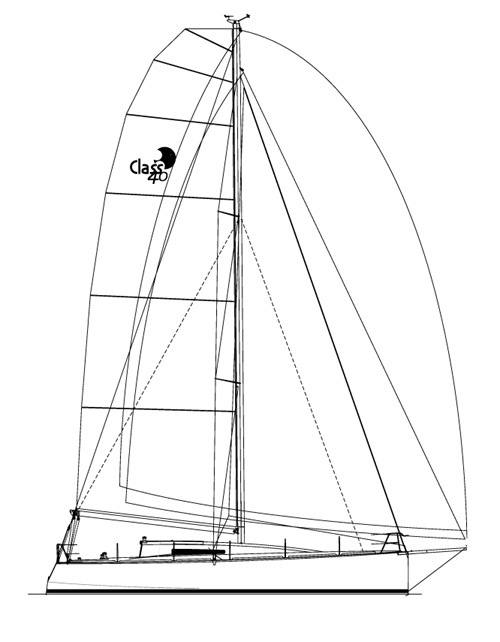 In case you’re interested, Amhas is currently for sale. You can check her out right here.

Look for more on this trip and the Class 40 scene in an upcoming issue of SAIL. 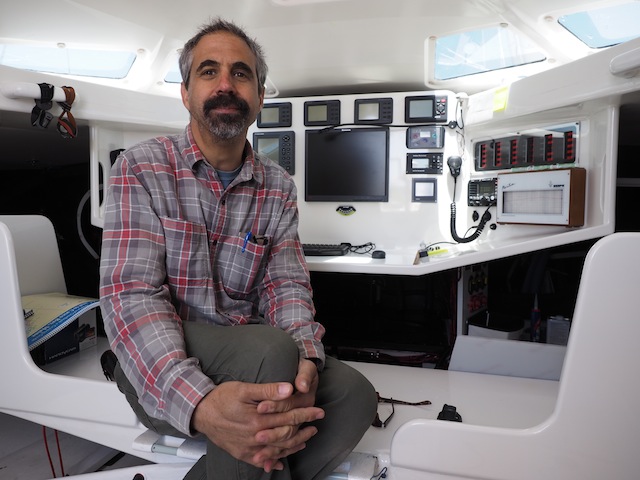