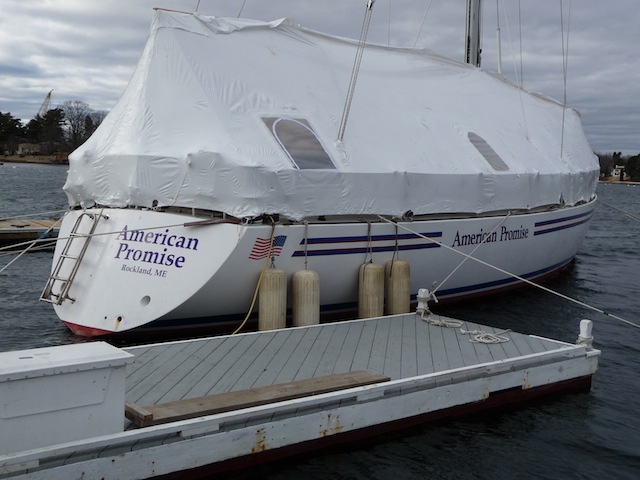 Here’s a piece of trivia from the Where Are They Now Department: American Promise, the Ted Hood-designed 60-footer that Dodge Morgan sailed around the world non-stop back in 1985-86, is spending the winter at Kittery Point Yacht Yard, just across the river from where I live. I cycled over during the weekend to pay her a visit and found her nicely buttoned up for the season.

I’ve been thinking a bit about Promise and Morgan ever since he died in September 2010, and the one thing that struck me most when I reviewed the boat’s design and original sail plan is that she had an in-mast mainsail furling system.

These days this wouldn’t be remarkable, even on a long-distance bluewater voyager like American Promise, but back then, over a quarter of a century ago, the technology was still more or less in utero. It surprises me that Morgan, a very cautious mariner who installed multiple back-up systems (e.g., two generators, two watermakers, multiple autopilots, etc.) all over his boat, was willing to take a chance on it.

Certainly he was aware of its potential for failure. In his original design brief for Promise, he mentioned the possibility of using such a system and was characteristically skeptical:

I have summarily looked at a stowaway main and was impressed by how simple to handle it all looked, how difficult it appeared to replace a blown sail, and how hopeless it seemed to consider my making a serious mechanical repair at sea. The only way I would sail with one is if there were tracks on both sides of the slot so that sails could be set the “old way” when the system fails.

Morgan in fact did have a Hood Stoway mast and main fitted on the boat and during trials the system failed spectacularly, with the sail jamming and the furling rod pulling partway out of the mast. In his book about the voyage (The Voyage of American Promise, Houghton Mifflin, 1989), Morgan makes it clear that resolving the problem was a high priority prior to his departure, but he doesn’t describe exactly how it was resolved. Nor does he mention whether auxiliary sail tracks were in fact installed on the exterior of his Stoway mast, but near as I can tell from inspecting photographs of the boat and its rig they were not.

Having recently reread the book, I find no mention of the Stoway mainsail furler causing any problems during Morgan’s record-breaking 150-day circumnavigation, though it seems he did have persistent problems with his headsail furler.

We have certainly come a long ways since then. Indeed, in the past decade the concept of the in-mast furling mainsail has passed a tipping point of sorts. Where once it was decried as an unreliable abomination and an insult to the art of sailing, it is now becoming the dominant system on mass-production cruising boats. Some builders now even put them on their boats as standard equipment and charge extra to install conventional hoisting mains.

In-mast furlers have certainly been refined over the past several years and are now reasonably reliable. One unresolved problem, however, is that they can only be used with a fundamentally inferior sort of mainsail. Unlike headsail furlers, which demand no changes in the basic architecture of a headsail, in-mast furlers require that the entire concept of the Marconi mainsail be reinvented. Vertical battens, of course, help restore some of the lost area in the roach of a furling mainsail, but in fact I’ve never met a vertical-batten sail that was as efficient as a proper sail with horizontal battens. And most furling mains, of course, still have no battens at all and carry hollow leeches that make them simply atrocious air-foils.

Unfortunately, the nature of the technology involves a fundamental contradiction. The entire purpose of a modern Marconi rig–the reason we put up with all the highly tensioned rigging and extraneous hardware in the first place–is so we can fly very aerodynamic sails that improve performance, most particularly to windward. To take this already complicated performance-oriented rig and further complicate it by installing furling gear with many moving parts inside a mast, just so we can fly a sail that degrades its performance, is only self-defeating.

Leaving aside the question of performance, there are still other issues with in-mast mainsails. For one thing, because the sail track on the furling rod is located inside the mast, it can be difficult to bend on and hoist the sail. Some riggers I know estimate that about half those who own boats with in-mast mains feel compelled to hire a professional just to perform this simple job. This obviously is good news for riggers, but can be a real pain in the butt for owners.

Also, because the sail must feed through a relatively narrow slot in the back of the mast to reach the furling rod, some care is always needed when furling or reefing it. To prevent the sail from jamming in the slot as it rolls up, it is best that it be unloaded with little or no pressure or tension on the leech or clew. This ensures the neatest furl and makes for a flatter, better-shaped sail as it is reefed down, but it means the sail must be feathered into the wind as much as possible before turns are taken on the furler. To do this the boat may need to be turned to windward, at least to some extent, as the sail may otherwise get pressed hard against the edge of the slot as it enters the mast, increasing friction and hampering the furl.

Note too that this will be more of a problem on one tack than the other, as the sail will be folded hard against the leeward edge of the slot whenever it is being rolled on to the leeward side of the furling rod. Unfortunately, it is also most likely to be an issue when sailing off the wind in strong conditions, which is precisely when one would most like to be able to shorten sail without having to round up. 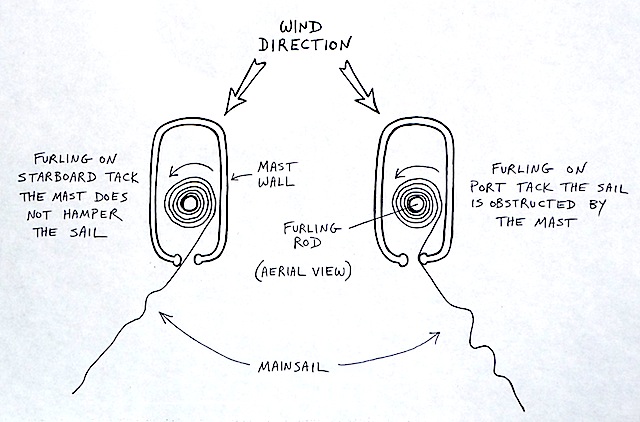 On the other hand, as Dodge Morgan found, there’s no denying these systems can be incredibly convenient and easy to use. Personally, I’d say that for larger boats, starting at about 45 feet, they do make sense. And the larger the boat, the more sense they make. A large boat like American Promise with a long waterline and more inherent speed potential to begin with can better suffer some degradation in performance than a small one. On a large boat with a proportionately larger rig the ability to handle sail more easily is also proportionately more valuable. Finally, being forced to round to weather sometimes to reef or furl a sail is both safer and less intimidating on a large boat than it is on a smaller one.

On smaller boats–certainly on any boat where a conventional mainsail can otherwise be hoisted, handed, and reefed by a single person–I feel strongly it is best to stay away from in-mast mainsails. Here the increase in convenience is relatively slight compared to the loss of performance.

Getting back to the WATN Department: I see from googling around a bit that American Promise is now being used as an environmental tool. As of last year she was the mothership of the Rozalia Project, which is dedicated to finding and removing trash from the marine environment. According to the project’s website, the boat is now “packed full of underwater garbage hunting technology, she has 2 VideoRay ROV’s (remotely operated vehicles) capable of diving down to 1000ft, equipped with a Blueview imaging sonar, manipulator arm, Tritech’s Starfish sidescan sonar for imaging the ocean floor and a Lynn box for making fuzzy images sharp.”

I note, too, however, that she no longer carries an in-mast mainsail.