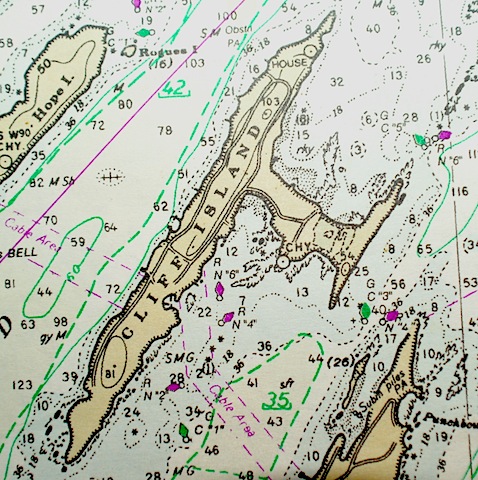 I stopped in for the night at Cliff Island on my way back from Malaga during my Mini Solo Cruise, and we stopped there again during a family weekend on the boat soon afterwards. I first checked it out just last year, but since then I’ve anchored or moored there repeatedly, as it is very conveniently located. Like Chandler Cove, it is close enough to Portland that I can reach it on a whim. It is also right next door to Jewell Island, which is one of the most popular cruising destinations on Casco Bay, thanks to its many trails and ruined WWII fortifications. The anchorage at Jewell, however, is pretty tight. Cliff Island makes a great easy-to-reach default destination if you get shut out there, or if an inopportune wind shift forces you out at some godforsaken hour.

Cliff Island, as you can see, has a distinctive H shape. Essentially, it consists of two narrow rock ledges (one long, one much shorter) running on a southwest-northeast bias (a configuration very common in Casco Bay), with a low sandy isthmus that runs on a northwest-southeast bias connecting them. There are natural anchorages both south and north of the isthmus.

The most protected spot on the south side of the isthmus, hard up against the main body of the island, is known as Fisherman’s Cove and is normally full of local lobster boats and lesser craft  on moorings. I’ve never seen a transient cruising boat in there, but I’ve often seen vacant moorings and there probably is room for a boat to lie to a prudently set anchor. In a hard norther I also wouldn’t rule out lying to a anchor set close to shore in the separate bight east of Fisherman’s Cove, but in a nor’easter this probably would not be tenable.

During the summer cruising season, when the prevailing winds are southerly, it is the much larger anchorage north of the isthmus that is attractive to transients. This is bifurcated into two equal parts by a submerged ledge. There are also three submerged lumps to look out for when coming or going, but on the whole access is easy and open. Coming from the west, rounding the north end of the island’s main body, you can cut the corner as fine as you like. Coming from the east there is a channel that needs respecting. Currently this is marked by one green buoy, and the advice from Taft and Rinlaub’s Cruising Guide to the Maine Coast is that you should pass south of this and leave it to starboard. This, however, flies in the face of the buoy pattern on the rest of Casco Bay, which has east-west passages between ledges and islands marked with green buoys to the south and red ones to the north. You’ll see my old chart for Casco Bay, above (corrected to Oct. ’94), shows this was also true at Cliff Island when it had buoys either side of the channel. In my own experience, you should be fine whichever side of the green buoy you pass by, as long as you stay very close to it.

In season the east side of Cliff’s northern anchorage is usually most popular, as there are often several loose moorings you can pick up. Those who want to lie on their own hooks usually favor the more secluded west side, where there is excellent holding in very sticky mud. When I was there on my own I shared this side of the anchorage with a big schooner, and both Lunacy and I fairly cringed with paranoid fantasies of being stalked by schooners. Fortunately, this one stayed put and did not assault us.

Looking at the chart you’d think the west side would offer decent protection from a northwest breeze. In fact, however, as I discovered that very night, a northwest wind with a just a little bit too much north in it can wrap around the north tip of the island’s main body and become downright northeasterly. In a hard northwest blow after a strong cold front you therefore should probably be elsewhere.

Unlike Little Chebeague or Malaga, Cliff Island is thoroughly inhabited. Indeed, it is officially part of the city of Portland (as are six other islands in the vicinity) and enjoys year-round ferry service to downtown. There is a post office, a church and community center, and an adorable one-room schoolhouse that serves a year-round community of about 60 people. In the summer the population swells to over 200, and the island’s small network of dirt roads comes alive with vacationing families strolling about, bicycling, and noodling around in golf carts. They are always happy and smiling and usually greet strangers quite enthusiastically.

Cliff Island also has a store. A most excellent one. Located on the west side of the island, right above the ferry dock, it now belongs to Steve and Johanna Corman, two school teachers from Virginia who up and moved to Cliff in a heartbeat two years ago after Johanna, during a visit to the island, saw a sign reading: Subs & Soda $5, Add chips $6, Store for Sale $5,000.

During my solo visit, I was quite happy to find that the tiny Pearl’s Seaside Market (there’s also a snack bar and ice cream parlor next door) had all three items I was seeking: a tomato, a bottle of wine, and a jar of marinated artichoke hearts. When I came back again a couple of weeks later with Clare and Lucy, we also discovered they have the best Whoopie Pies on earth. 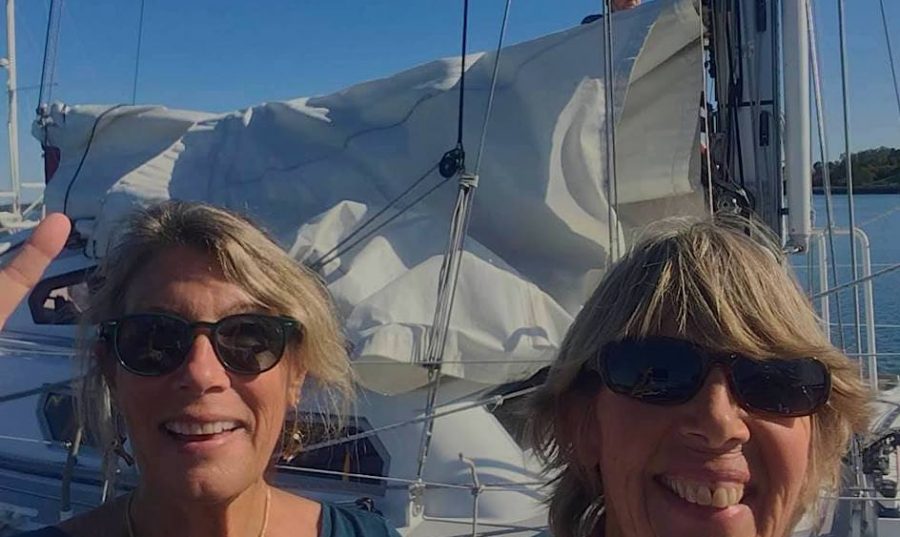 END OF SEASON BLUES: One Last Cruise and Prepping to Haul