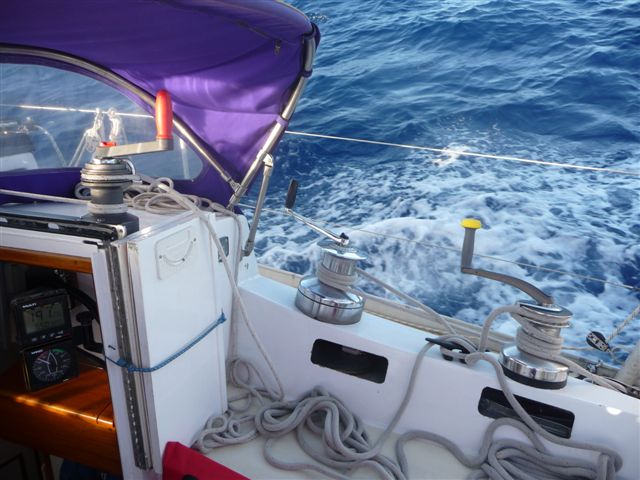 One of the things I did before sailing Lunacy down to the W’Indies for the winter was service all the winches onboard. I had been putting this off for years, but when the primaries in the cockpit started screaming at me whenever I trimmed the jib late last summer, I figured the time had come. I am not normally intimidated by winches. But in this case I was a bit, because Lunacy carries three different types, two of which seemed potentially troublesome.

Here you can see all three species lined up in a row in the cockpit. The winch on the right, a two-speed Andersen, is fairly common these days. The one in the middle is an antique three-speed Lewmar I think dates back to the early 1970s. Perversely, though they are the most powerful winches onboard, I use my two big Lewmars as secondaries to trim my staysail and sometimes the asymmetric spinnaker, primarily because they are not self-tailing. I think of them as my “kedging” winches, though I’ve never had to use them as such. They are so antique that conventional winch handles don’t fit them. As you can see I do have one antique Lewmar handle that does fit them, and I live in constant fear of losing it. The winch on the left is an Enkes winch, manufactured in Holland, which I had never heard of before buying Lunacy. In addition to this one mainsheet winch you see here, there are three other Enkes winches forward on the mast for handling halyards and reefing lines.

I had originally planned to take lots of photos of the interior architecture of all three species when tearing them down so that this blog post might constitute a detailed illustrated study of winch anatomy. But once into the job my hands quickly got so greasy and filthy I did not want to handle my camera, so please forgive the lack of explicit imagery.

The first winches I attacked were the Andersens, as I figured they’d be the most straightforward. This turned out not to be true, though they did not present any particular problems. You need only an appropriately sized Allen wrench to remove the top of an Andersen winch and thence the winch drum, and once inside you can easily get every moving piece off the body of the winch without removing the body from the boat. When it comes to winch maintenance this, as far as I’m concerned, is a critical virtue. Andersen winches are a bit complicated inside, but not unusually so, and I had no problem putting everything back together again after I’d cleaned and greased all the bits.

While working on one of the Andersens I did commit the classic faux pas of letting one of the spring-loaded pawls leap overboard in the midst of reassembly. Most fortunately I found that the missing Andersen pawl was almost exactly the same size as a spare Lewmar pawl (left over from Crazy Horse days) that I happened to have in my collection of random little parts and fasteners. The Lewmar pawl fit in place, works fine, and saved me from having to waste a lot of time sourcing a new Andersen pawl.

Next I tackled the Enkes winches. I was worried about these because I had torn down one before as an experiment, just to familiarize myself with the breed, and had not had good luck. The design, I have to say, is poor. There is a set screw (turned by either an Allen wrench or a screwdriver, depending on the particular screw installed) that holds the self-tailer’s stripping arm in place on the top of the winch spindle. Removing the screw itself is normally not hard, but pulling the stripper arm off the spindle (so you can subsequently remove the drum, etc.) after the screw is out certainly can be. Things get sticky, to put it mildly, and if it has not been off in a while, the stripper arm is usually not inclined to budge a centimeter absent extreme persuasion. After whacking those on my winches with a hammer a few times, I managed to get things moving, but still it took some cursing and muttering to get them off entirely. In one case I whacked myself hard in the head with the offending piece when finally it came free. (On doing a web search I see that some contemporary Enkes winches do not have the same arrangement, but that others do.)

The next problem with my Enkes winches is that you cannot take them all apart without removing the main body of the winch from the boat. Or at least I couldn’t. The bottom-most gear is locked in place with a pin that can be removed with no tool I am familiar with (though there may well be some weird proprietary tool that can do the job). I wasn’t about to unmount and reinstall four different winches, so I just punted and spritzed some WD40 into the gear in question to keep things moving freely.

I left the big Lewmars for last, as I assumed that any three-speed winch must be devilishly complicated inside. 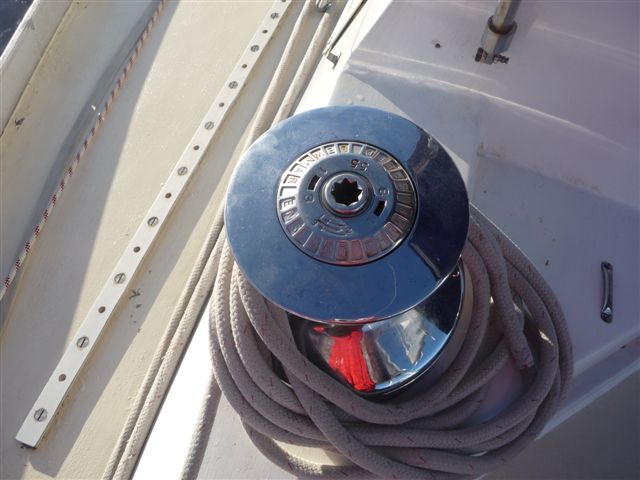 But no! Just like the more modern one- and two-speed Lewmar winches I had on Crazy Horse, these antique three-speed jobs are actually quite simple and easy to deconstruct. Pry one retaining circlip off the top of the winch with a knife or the tip of a straight-edge screwdriver and bingo, you’re inside. The interior architecture is extremely straightforward, and everything comes off the main body of the winch very easily. Not surprisingly perhaps (given how easy they are to take apart), these winches were the ones that had been most recently serviced. They were clean as a whistle, with fresh grease inside, and need not have been disturbed in the first place.

Having gone to all this trouble, I must note that my Andersen primaries, for reasons I don’t understand, are still screaming at me sometimes when I trim my jib.

And as long as I’ve got you all pondering winches, I want to make a point about bottom-action winches: WHY WHY WHY, pray tell, have these nearly gone extinct??? In many situations, particularly on modern boats where critical winches are often placed under dodgers or near bimini frames, it is desirable to have a winch that is designed to be turned with a handle that saws back and forth rather than a handle that works best when fully rotated through 360 degrees. Bottom-action winches can also be quickly loaded with line and unloaded again without having to remove and replace the winch handle, which is always a distinct advantage. 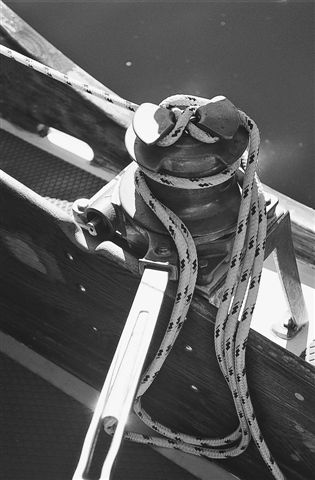 I installed a pair of these bottom-action Murray winches from New Zealand on Sophie, my Golden Hind 31, when I re-rigged her and thought they were superb. (Hats off to Lin and Larry Pardey for introducing me to them in the first place!) The cleat at the top makes them self-tailing to a limited extent, plus there is a 40-to-1 worm gear (a separate handle goes in that socket you see at the bottom of the winch) that allows you to easily both trim and ease a sheet even when it is under super-maximum load. These puppies also come apart very easily, and if you want you can switch the pawls around inside so the winch drum turns counter-clockwise rather than clockwise.