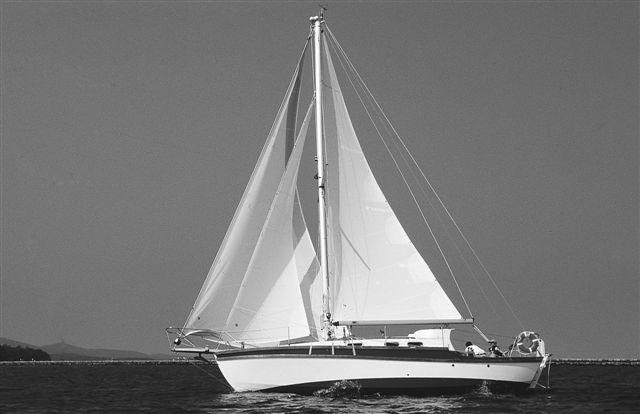 Though not well known here in the U.S., the Golden Hind 31 is an iconic boat in Great Britain. I bought one in Maine over 10 years ago, cruised it on the coast there for several seasons, and developed great respect for it. Conceived as a shoal-draft bilge-keel cruiser for gunkholing the tidal creeks and swatchways of East Anglia, it is also a proven bluewater boat. For many years it was said to hold the record for most transatlantic crossings by a production sailboat and at least one has been around Cape Horn.

Though it does have its quirks, the Golden Hind is extremely versatile. With less than four feet of draft it can sail into all kinds of nooks and crannies where other boats dare not venture, a feature I found very useful when exploring Penobscot Bay and environs. Thanks to its bilge keels, it stands up straight when aground and can be anchored with impunity in areas that dry out at low tide, which is very helpful when you’re looking for a parking place in a crowded harbor. Add to this the ability to cross oceans, and the Golden Hind makes for a unique package, particularly for a small boat exhibiting a great deal of traditional charm and character.

The original design, drawn up by Maurice Griffiths, was commissioned in 1965 by a British coffin manufacturer, Hartwell’s, that decided to try its hand at boatbuilding. They built 120 Golden Hinds in plywood over six years, whereupon their yard manager, Terry Erskine, took over in 1971 and began building the boat with a fiberglass hull and a wood deck and cabinhouse.  Erskine closed up shop in the early 1980s, but in 1995 production was resumed by Golden Hind Marine. Using Erskine’s molds they built only a few fancier, more modern “Mark II” versions of the boat before selling out to Newson Boatbuilders in 2006, which is building the boat to all stages of completion . In all, over 250 Golden Hinds have been built. Most surviving examples were built by Erskine, who filled several orders for Americans (my boat, named Sophie, built in 1977, was one of these).

Most Golden Hinds were built with the “standard” sloop rig, which is very short, reaching just 32 feet from deck to masthead. These boats tend to be slow under sail and rarely sail anywhere near their potential top hull speed, except when conditions are boisterous. The more modern Mark II boats have much taller cutter rigs (over 39 feet from deck to masthead), plus over 1,000 pounds more ballast, and though they have a lower potential speed due to the increased weight, they routinely sail much closer to that potential. A few of the older boats have also been converted to taller rigs. I did this myself with Sophie and was very pleased with the result. (The photo at the top of this post is of Sophie with her tall rig.)

With both a long full keel and two small bilge plates in the water, the Golden Hind’s underbody presents a lot of lateral surface area in three different planes. The boat tracks extremely well as a result and does not like to change direction. This makes it very easy to sail singlehanded, even without self-steering gear. It also points to windward better than one might expect, and the bilge plates help dampen the boat’s motion in a seaway. The plates also, of course, increase wetted surface area, which hurts light-air performance, most particularly on boats with shorter rigs. If one likes, the heavy steel plates can be removed, and I know at least one owner who tried this before embarking on a transatlantic passage. He reported his boat rolled much more than it had before and was more tender and that he did not consider the relatively small increase in boatspeed to be worth the bother and discomfort.

Many of the original all-plywood boats have deteriorated over time, but the fiberglass boats are strong and quite durable. The double-chined hull is solid laminate, while the cabinhouse sides are solid mahogany. The deck and coachroof beams are hardwood covered with marine plywood, which is sheathed with 6-ounce cloth and epoxy resin. The cast-iron ballast is fully encapsulated within the center full keel, while the bilge plates are through-bolted into a heavy steel support frame installed inside the hull. This allows the plates to carry the weight of the boat when aground without unduly stressing the hull.

Structural maintenance revolves mostly around keeping moisture out of the wooden parts of the boat, as any leaks lead to water wicking quickly along the plywood’s horizontal sections. Fortunately, the structure of the wood deck and house is not complex. All deck sections are easily accessed from inside the boat, and cutting out and replacing saturated areas is relatively easy. On the whole the later Mark II boats are built to a finer standard than the Erskine boats, with a more modern hull-laminate schedule and superior interior joinery. The Mark II models also have a redesigned rudder, with more surface area forward of the pivot point in the oversized prop aperture, and this helps to relieve the boat’s sometimes heavy weather helm.

For a small traditional boat with a narrow beam, the Golden Hind has a remarkably roomy interior. There is over 6 feet of standing headroom throughout the main cabin, plus both a dedicated nav station and a proper wet locker for hanging up foul-weather gear right by the companionway. The traditional lay-out has a full-size settee berth to starboard, plus a love-seat to port that can be converted to a full-length berth by opening a small hatch in the forward bulkhead, which allows prostrate crew to insert their feet into the bottom of the adjacent hanging locker. There is also a small removeable table that can be set up in the center of the saloon. The V-berth up forward can honestly function as two separate single berths, or as a very roomy double if the midsection is filled in. An optional dinette layout also allows for the creation of a double berth in the saloon if desired. The galley, as a rule, is a bit undersized with inadequate counter space and can be difficult to use while underway. 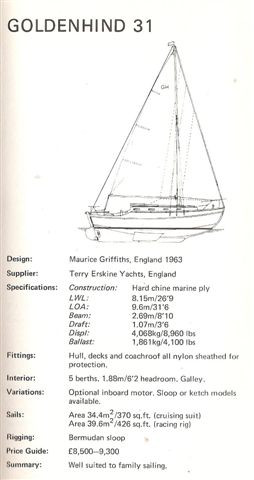 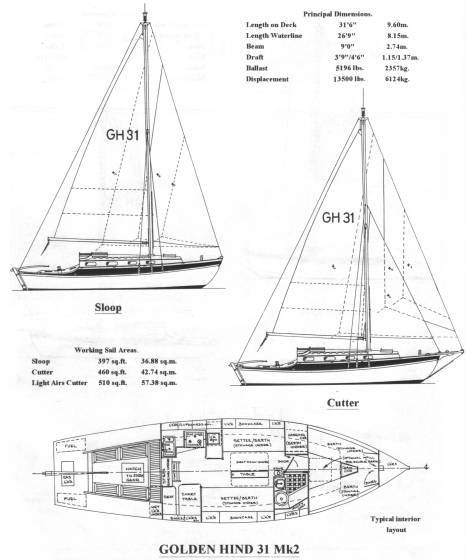