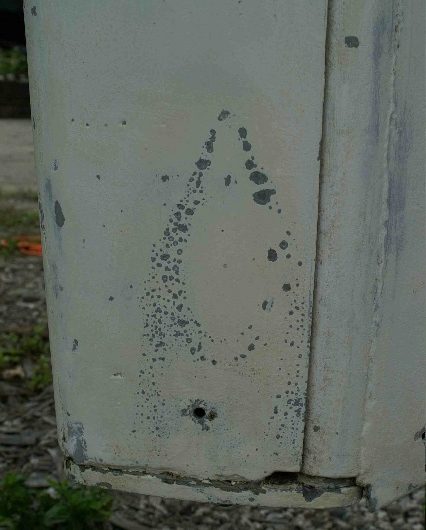 While Lunacy was hauled out last June to have her new engine installed, I became aware of some other problems.  The most perturbing ones concerned her rudder skeg, which is a rather high-aspect alum inum structure that is welded on to the main structure of her aluminum hull.  Problem number one was that somehow, during the course of the year and a half since Lunacy was last hauled, about two pints of clean seawater somehow contrived to get inside the skeg.  Problem number two was that a bizarre corrosion pattern, seen here, appeared on the lower part of the skeg after the boat was out of the water for a couple of days.

Problem one (or the discovery of it, at least) was definitely related to an earlier maintenance adventure wherein Lunacy‘s bottom was sponge-blasted prior to receiving a new barrier coating and new bottom paint (of which more later).  During the blast a very small pinhole appeared in the skeg along what I assumed must be a weld for the interior framing.  A little bit of black schmutz was oozing out of the hole, which led me to fear there might be much more schmutz inside the skeg.  To find out, I had a hole drilled in the bottom of the skeg and installed a drain plug.  (While I was at it, I did the same for the rudder.)

But for that drain plug I never would have known there was water in the skeg.  No more schmutz came out when the drain hole was first drilled, and now every time the boat is hauled, I pull both the skeg and rudder plugs expecting to hear a satisfying little whoosh of air rushing out.  Except this time (much to my dismay) I got the water instead.  I thought at first it might have leaked in through the original pinhole, which had been plugged and skimmed over with epoxy after the blast. 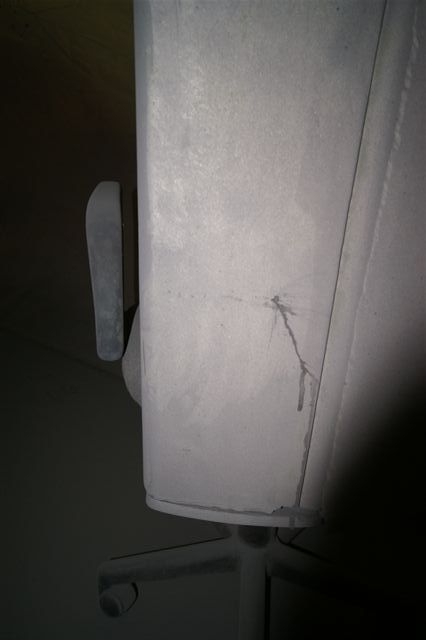 It looked, too, as if the very top of the tear-drop-shaped corrosion pattern on the skeg was right where the original pinhole (seen here) had been located.

I inspected the area with a magnifying glass and found no holes penetrating the aluminum plate.  There were several tiny holes in the barrier coat, and tiny powdery corrosion deposits at the base of each hole, but under each deposit the plate was still solid.

I had the skeg pressure-tested and we found there were small cracks in the weld at the top of the skeg, at its aft end, which has a concave curve in it to receive the rudderstock.  To trace the full extent of the crack and repair it we therefore had to drop the rudder.  The fact of the crack was discouraging, but not too surprising given its location and the design of the skeg.  I reckon the area where the crack occurred is where the deep high-aspect skeg must be most stressed by side-loading from the deep rudder. 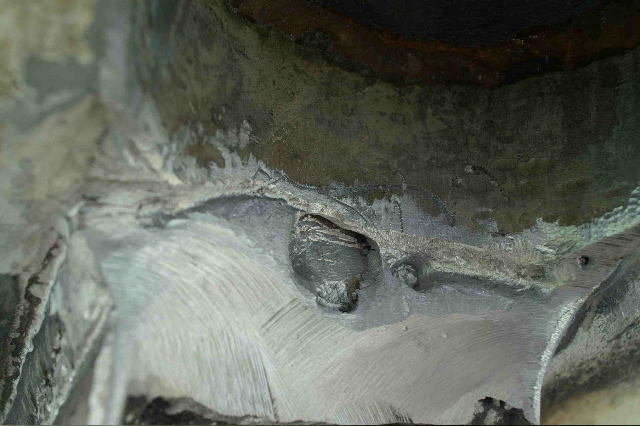 Scheduling a welder to come fix the crack was none too easy, and he was none too happy about how deep into the old weld he had to grind to make sure he got to the bottom of things.  It took some time for him fill the void he created and make it tight.  The new weld, when finally complete, was none too pretty, but it sure does look strong. 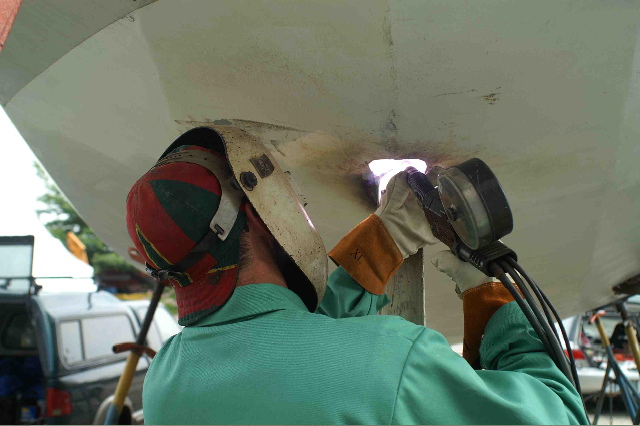 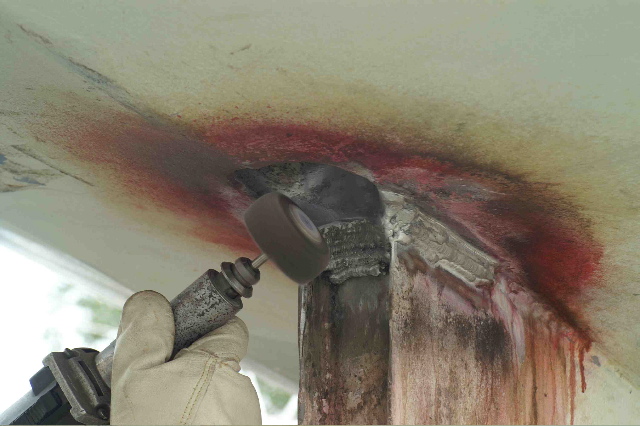 Meanwhile, inquiring minds were madly speculating about the source of the weird surface corrosion pattern at the bottom of the skeg.  Phineas Sprague, ringleader at Portland Yacht Services, where all this work was performed, immediately opined that it must be the result of a manufacturing defect in the aluminum plate itself.  “An inclusion in the plate” is what he called it.  This, he explained, happens when an impurity in the alloy gets smooshed across the plate as it is rolled out flat.  This seemed very clever and might well explain the teardrop pattern and the two wings on either side of it—they certainly looked like the result of some sort of pressure having been applied from one direction.  Others at PYS, when told of Phin’s theory, opined that Phin reads way too many books.

The theory I currently like best, which I came up with myself, but which (I must admit) was inspired by Phin’s theory, runs as follows: 1) an impurity in a frame weld inside the skeg led to the formation of the pinhole uncovered during the sponge blast; 2) this impurity manifested itself as the black schmutz we saw seeping out of the hole; 3) trace elements of the schmutz during the blast were spread over an area just below the pinhole in a pattern formed by the force and direction of the blast (i.e., downward, assuming a blast operator standing over the lower part of the skeg); and 4) the impurities in the blast-migrated schmutz somehow survived the pre-coating acid wash and created tiny little corrosion cells that ate their way through the new barrier coat.

Of course, this could be total bullshit.  And it certainly doesn’t explain why the corrosion pattern only became visible after the boat was out of the water for a few days.  But it does account for the fact that the top of the corrosion pattern and the location of the pinhole seem to have been identical.  This, I think, cannot be coincidental.  But then what do I know???  I’ve owned and maintained an aluminum boat for only a few years now.  I would welcome—indeed do hereby beg for—advice from aluminum-boat owners more knowledgeable than me.

And what did we do about the corrosion?  Hit with a needle gun, gave it another acid bath, recoated the area with epoxy, and applied more bottom paint.  Officially, we have our fingers crossed, and I sure hope I won’t be posting about this again after Lunacy‘s next haul-out.