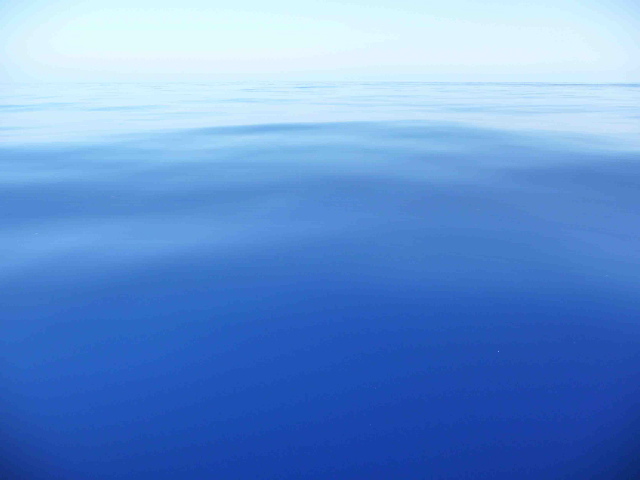 This story begins in a dead flat calm somewhere between Bermuda and Portsmouth, New Hampshire, late last spring.  Said dead calm is pictured here in all its glory.  In all my years of wandering about the watery parts of our world, I swear I have never ever seen a stretch of open ocean quite as flat and millpond-like as this.  If you have a functional auxiliary engine it is much easier to appreciate such scenery, as you can motor through it regardless.  Without the engine, however, it gets a little frustrating.

When this photo was taken Lunacy‘s engine, an elderly 40hp Lister-Petter diesel, was once again acting up and making trouble.  Besides running a bit hot (in spite of some expensive cooling-system surgery undertaken in St. Maarten during the winter), and besides all the engine oil that was somehow escaping the block and trickling relentlessly into the bilge, there was also some mysterious fuel problem going on wherein the engine stuttered and choked at certain RPM levels.  This level over time gradually decreased, until finally the engine wouldn’t run at all.

This meant we weren’t going anywhere unless there was wind to fill our sails.  I really didn’t mind this so much, as I had some time on my hands and have always rather enjoyed the perversity of relying on the environment to get where I’m going.  But for my one crew member, John Madden (no, not the football coach!), things got a little touch-and-go.  He had a Very Important Meeting to attend in New York City at noon on a certain date, and as time dragged by, and as we slowly dragged our sorry butts north toward Portsmouth, it seemed increasingly likely he wouldn’t make it.  Though John was perfectly sanguine when we were far out at sea… 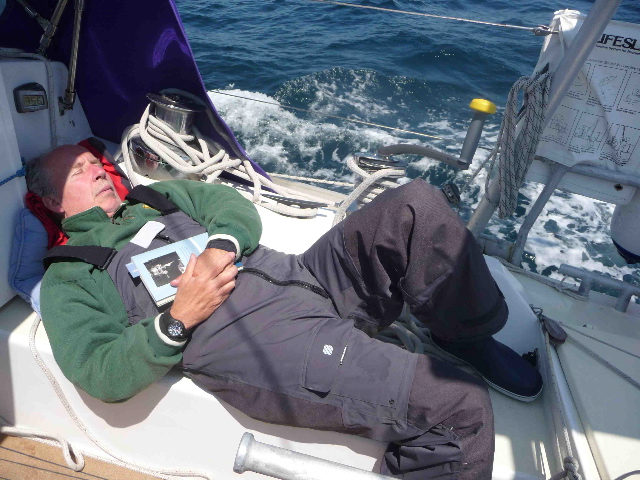 …he did get more anxious as we closed the shore.  It took us over 48 hours just to get from the Great South Channel off Nantucket up around Cape Cod to New Hampshire, and during that time we had a protracted discussion about whether it made sense to get towed in the last 50 or so miles so John could attend his meeting.  I told John it was his call, as long as he paid for the tow.  In the end, however, I managed to shame him into trusting the weather gods, and lo… they delivered.  As soon as John announced the tow was a no-go and he was willing to blow off the meeting if necessary, a light breeze sprang up on our beam, we launched our cruising chute… 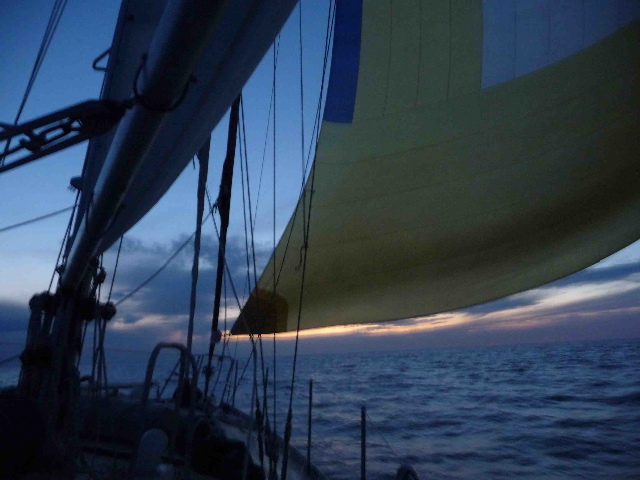 …and sailed the last few miles into Portsmouth.  A most glorious evening.  The next morning John just had time to catch an early flight to New York, where he learned his meeting had been cancelled.

HA!  Let that be a lesson to any would-be voyagers out there who think their schedules are sacrosanct and written in stone.

But I digress.  This is supposed to be about the engine…

En route to Portsmouth, as the engine was faltering, but before it died, I promised it (in a fit of pique) that I would rebuild it rather than replace it if it kept running for the duration of the passage.  After it died I felt I had little choice but to make good on my threat.

I had visions of a 50hp Yanmar dancing in my head.  Like many American consumers, the mantra “something Japanese that runs” has long been in the forefront of my mind when it comes to matters mechanical.  But after I did some online research it became clear a Yanmar was out of the question.  Lunacy‘s engine lives inside a box in the middle of the boat, with two galley sinks directly over it.  There is OK access from the sides, but none at all from the top or rear, and only poor access from the front (first you must remove a heavy table or, even better, the mast to really get at anything).  Yanmar, quite reasonably (but unfortunately for me), puts all important service points on its engines right up front, which on normal sailboats is the easiest place to get to.  In the end I selected a Westerbeke 44B simply because it fit best in my engine space.  You can reach most service points from either side of the engine, plus the exhaust is on the left side, same as on the old engine, which greatly simplified the installation. 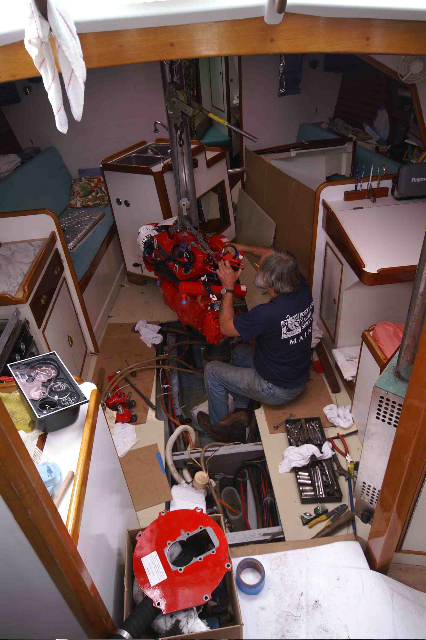 One nice thing about Lunacy‘s engine box is that you can remove it entirely if you really have to.  There is also a dedicated heavy-duty lifting eye right over the engine bed, which makes swapping out engines relatively easy.  But let’s emphasize that term RELATIVELY.  To get everything right in the end we had to deal with any number of ancillary issues, which I won’t bore you with here.

The point of the tale is just this: in the end, after squandering much time and money, I had the same problem as before.  When I ran the new engine at certain RPM levels (anything above about 2200), it started choking and sputtering, just like the old one.  After a long train of diagnostic tests we reluctantly cracked open the fuel tank (an involved procedure, I assure you) to discover a veritable paradise of filth and debris.  It was all solid enough that it didn’t dissolve into the fuel and plug up the filters, but apparently when the engine (old or new) was running hard enough to create a certain amount of suction at the end of the pick-up tube, chunks of debris would get sucked up on to the tube and clog it.

That’s the theory anyway.  I’d love to hear any others you might have to offer.  The bottom line is: since cleaning the fuel tank all stuttering and choking of the engine while running has ceased.

But this, of course, is the larger question: should our hero issue himself a big dope-slap here???  Should I have just kept the old engine???  It still had other issues (see above), but a rebuild probably would have resolved these.  Ultimately, I see this as a cosmic conundrum.  When you give a piece of machinery a life-or-death ultimatum, does it really matter whether or not you are true to your word? 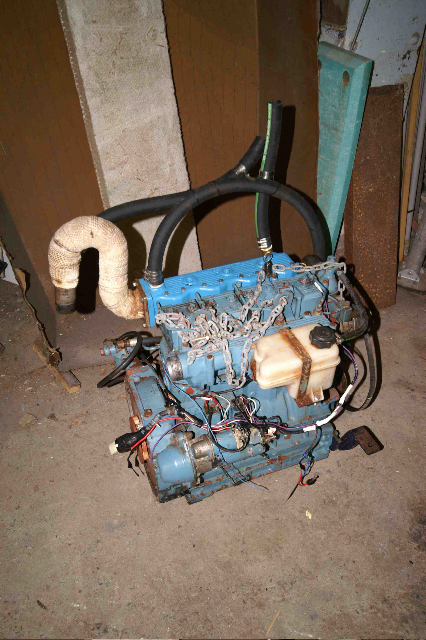 PS:  This is the old engine.  Anyone want to buy it???  It comes with bags of parts.  A new exhaust manifold was put on last winter.  In the past two years the raw-water pump was rebuilt plus the fresh-water pump was replaced.  I also have a new heat exchanger ready to install, plus spare injectors and other goodies.